Diagnosis. Idiosoma completely sclerotized except a small area surrounding the genital field, dorsal furrow absent. Gnathosoma fused with Cx-I. Sixth segment of all legs with a distal spatulate seta. Dorsal sclerotization without a reticulate pattern. P2 and P3 without denticles.

Description. Female: Idiosoma colour yellowish brown, 826 long and 745 wide, slightly truncated posteriorly, dorsum in lateral view dome-shaped. Idiosoma completely sclerotized without dorsal furrow, only a small area surrounding the genital field unsclerotized. Dorsum with five pairs of glandularia and the postocularia, the most posterior pair enlarged. Anterior coxae slightly extending beyond anterior idiosoma margin (but in Fig. 1BView FIGURE 1, due to a somewhat tilted position, appearing distanced from anterior idiosoma margin). All suture lines of coxae obliterated. Cxgl–4 located near suture line between Cx-III and Cx-IV. Genital field with three pairs of glandularia on slightly curved genital plates, width of genital field 227, width of pregenital sclerite 70. Length of P1–P5: 34, 50, 44, 84, 24. P2 and P3 without denticles, but P2 with three stout setae, P4 slender. Length of I-leg-4-6: 124, 150, 112; I-leg-5 anteroventrally with two stout, pointed setae. Length of IV-leg-4–6: 162, 190, 146. Legs without swimming setae, all legs with an anteroventral spatulate seta on the sixth segment (but not well visible in the illustrated fourth leg). Leg claws without claw blade, one claw simple, the other claw with a dorsal clawlet, the latter claw not illustrated in the first leg. Excretory pore located at the posterior margin of the idiosoma in the sclerotized integument.

Etymology. Named for the country where the new species was found.

Remarks. The new species differs from the male Scutobates ovalis ( Cook, 1966)  , the only known species of the genus, in the absence of a reticulate pattern of the dorsal sclerotization, the absence of denticles on P2 and P3 and the presence of a spatulate seta on the legs (absent in S. ovalis  ).

With S. ovalis  the new species shares the extensive sclerotization, comprising almost the complete idiosoma except for a narrow ring of articular membrane surrounding the genital field. Cook (1966) stated that if the gnathosoma of the female is fused with Cx-I, the assignment to a separate taxon (i.e. Scutobates  ) is correct. In the female of the new species such a fusion is indeed present.

As stated in the introduction, a complete sclerotization of the dorsum and the absence of a dorsal furrow is very rare among the Hygrobatidae  . In our opinion this warrants the status of a full genus in Scutobates  . 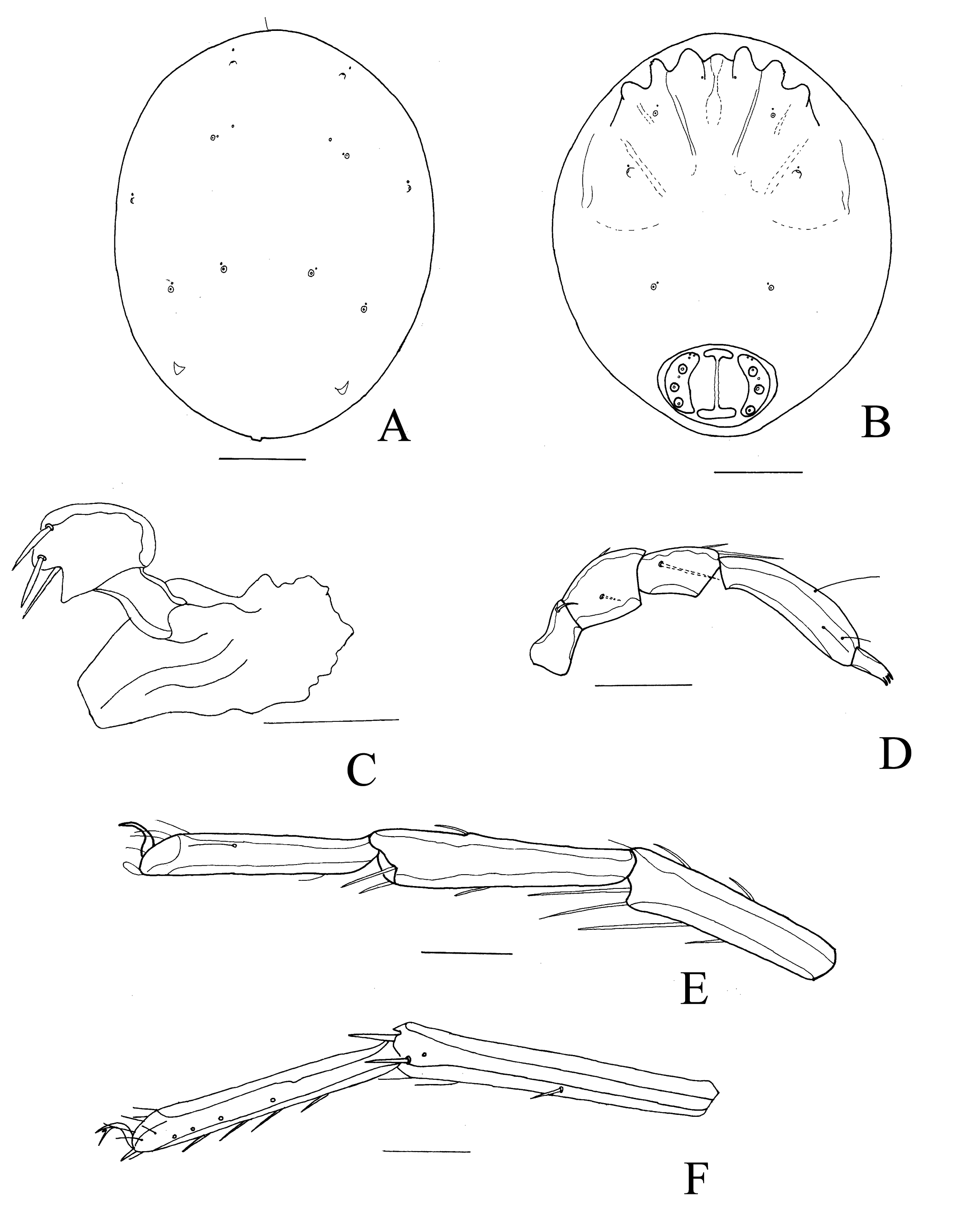