Distribution. Aulacophora foveicollis   is widely distributed in southern Palearctic, African and Oriental Regions. It was reported from Yemen by BRYANT (1957). However, re-examination of those specimens is necessary to decide if his specimens belong to the true A. foveicollis   , A. calva   or unclear species of Aulacophora   (see below).

Comments. All three recently collected specimens have yellow underside, only abdomen has black lateral margins. The median lobe of the male last visible ventrite is shallowly impressed but its apex has a deep transverse oval cavity ( Fig. 40 View Figs ). The body lenght of three available males: 7.0– 7.2 mm. The same colouration of underside was reported by MEDVEDEV (1996) for specimens of A. foveicollis   from Saudi Arabia. Although the aedeagus of the Yemeni specimens is very similar to that of A. foveicollis   as published by BERTI (1990) (see Figs. 41, 42 View Figs ), I have some doubts that my and Medvedev′ s specimens belong to A. foveicollis   because this species has abdomen black with orange median lobe of the last male ventrite only. In my opinion specimens from the Arabian Peninsula may represent an undescribed species but I am unable to make a comprehensive revision of Aulacophora foveicollis   material necessary for such decision at the moment. Moreover, I have not seen any female from the Arabian population whose structure of abdomen and pygidium can also help to unravel this problem. 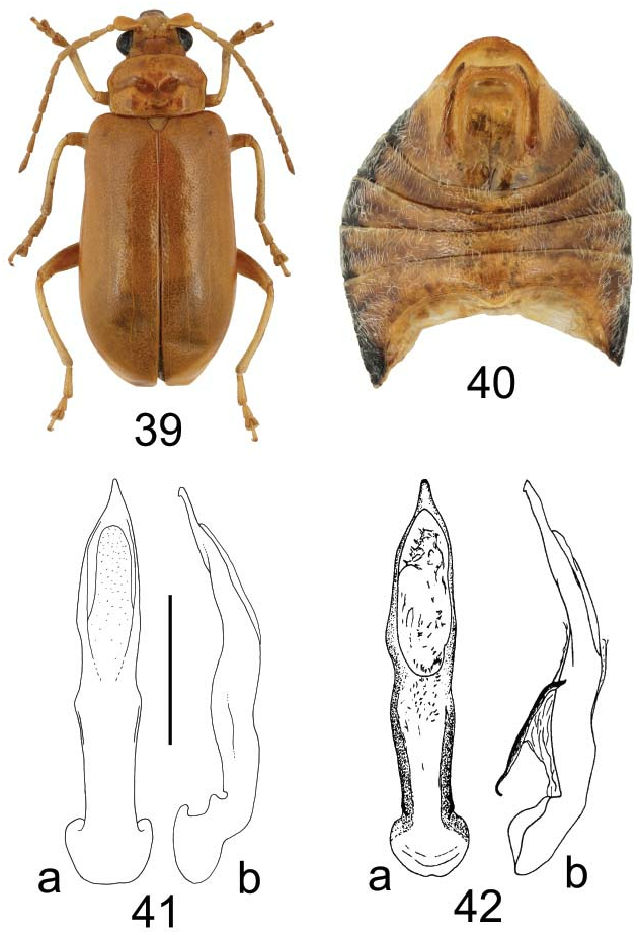