Potamonautes niloticus is a large, conspicuous river crab that has a wide distribution throughout the entire length of the Nile and its tributaries and is known to occur in more than 60 localities in six countries ( Egypt, Sudan, Ethiopia, Uganda, Kenya and Rwanda) and Lake Victoria ( Cumberlidge 2009a). This species is endemic to the Nile River basin and has never been found outside this system in sub-Saharan Africa and there are no records from Tanzania, despite its presence in Lake Victoria, Kenya and Uganda ( Reed and Cumberlidge 2006; Cumberlidge 2009a,b). The records reported in the present study indicate that P. niloticus also occurs in the Mediterranean zoogeographical subregion of the Palaearctic, which is well outside the Afrotropical region. Most of these additional localities are from the Nile River in Lower Egypt from Cairo, Turah and Samannud (which lies on the Damietta branch of the Nile in the central Delta), but one is from “ Palestine ”, which, if confirmed, would further extend the range of this species outside the Afrotropical region. Moreover, all of these specimens were collected between 88 and 140 years ago and the authors are not aware of any new material that has been collected from the freshwater habitats that lie between southern Israel and the Nile Delta.

Potamonautes niloticus occurs in a range of aquatic habitats including the major channels of the Nile itself and its lowland tributaries, in small and large lakes associated with the river basin, as well as in small clear fast-flowing mountain streams with rocky beds, and sluggish warm lowland streams with muddy bottoms ( Bott 1955; Williams 1964; Cumberlidge 1997, 1998, 2009a). This species is completely dependent on aquatic habitats and it has never been reported to leave the water whether it is found in streams, rivers or lakes. In the southern parts of its range in Kenya and Uganda, P. niloticus serves as a host for the aquatic larvae of the biting blackfly, Simulium sp. , which are the vectors of Onchocerca volvulus , the parasite that causes river blindness in humans ( Crosskey 1990). There is no evidence that P. niloticus is associated with this disease in the northern part of its range in Egypt and the Sudan.

Potamonautes niloticus is listed ( IUCN 2009) as least concern (LC) in view of its wide distribution, estimated stable population size and abundance (it supports small-scale local fisheries in Lake Victoria in Uganda and Kenya), and the lack of known widespread long-term threats. The stable population estimates are based on the fact that there are large numbers of specimens in museum collections, and on recent collections of this species from Uganda and Kenya, which implies that East African populations are stable, although anecdotal evidence indicates that the populations in Egypt north of the Aswan Dam may well be in decline because the most recent collection date (1922) available is from Lower Egypt (Cumberlidge 2008; Cumberlidge et al. 2009).

The type specimen deposited in the Muséum national d’Histoire naturelle, Paris is a dried male, collected from Egypt by Rüppell in 1830 and is in poor condition ( Capart 1954). Consequently the diagnosis given here is based on a non-type adult male specimen collected from the Yala River, Kaimoisi, Kenya (see Figure 1 View Figure 1 ) that conforms to the published description of the type. The NHM material from Palestine is worthy of comment because it was initially catalogued as four specimens (one male, three female) of Gecarcinus . All were registered under NHM accession number 1865.64, subsequently re-examined, and identified (by person unknown) as comprising two species. Two adult females (one ovig.) were determined as Thelphusa berardi [now Potamonautes berardi (Audouin, 1826) ], and the others as T. nilotica (now P. niloticus ). Both jars retained the original registration number and the identifications are confirmed here to species level. The record of P. berardi from “ Palestine ”, which was only previously known to occur as far north as Medinet el Fayum on the Nile, suggests that these two species of Potamonautes were sympatric with the potamid Potamon potamios ( Olivier, 1804) which occurs in the eastern Mediterranean region as far south as Israel, Palestine, and El Quseima (Kosseima) in north east Sinai (NHM 1922.11.22.32–33 and NHM 1928.6.7.1–2) in Egypt (Brandis et al. 2000). However, the age of the museum material reported on here means that the distribution status of these three species of freshwater crabs requires updating. 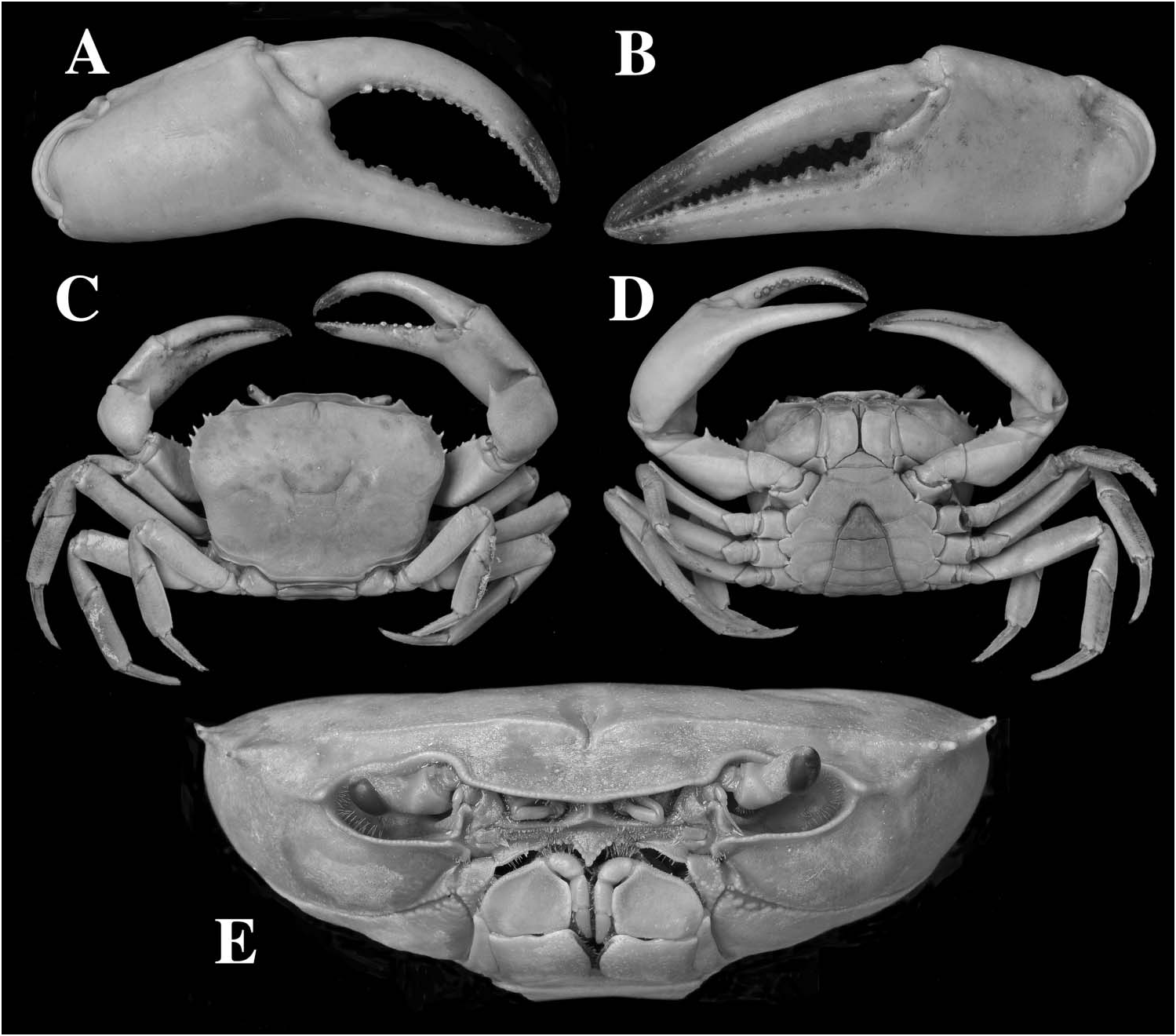