Vas deferens: These ducts are slender and thin walled initially, increasingly inflated and merging together into a united tube with thicker walls. In Tipula L., Dicranomyia Stephens and Thaumastoptera Mik there is a small bladder-like swelling prior to the fusion, filled with spermatozoa ( Dufour, 1851; Keuchenius, 1913; Liang, 1925). The ducts remain medially separated until they empty into a sac-like swelling at the anterior apex of the ejaculatory duct ( Neumann, 1958; Frommer, 1963). In Chionea Dalman the proximal half is very thin and at midlength turns sharply anteriorly and becomes greatly inflated, and probably functions as a seminal vesicle ( Byers, 1983). In Tipula , the vasa deferentia extend posteriorly and appear to arch anteriorly prior to fusion, whereas in Dicranomyia and Thaumastoptera they are straight, extending posteriorly ( Dufour, 1851; Keuchenius, 1913; Liang, 1925).

Accessory gland and seminal vesicle: The common vas deferens terminates in a ring or spherical-shaped, glandular-walled swelling of the ejaculatory duct ( Keuchenius, 1913; Neumann, 1958; Byers, 1961). This has been termed the seminal vesicle due to its large lumen and presence of masses of spermatozoa ( Byers, 1961, 1983). In contrast, Keuchenius (1913) never observed spermatozoa in this enclosure and considered it as having some sort of glandular function due to the thickened walls of this gland. The accessory glands also empty into this enlarged chamber. The accessory glands are often long, slender coiled tubes or greatly inflated, elongate sacs, each with a large lumen and walls of columnar cells ( Byers, 1961, 1983; Frommer, 1963).

Ejaculatory duct: A seminal duct, often quite long, extends from the enlarged chamber or seminal vesicle to the sperm pump.

Ejaculatory apodeme, sperm pump, and aedeagus: The ejaculatory apodeme of the sperm pump is normally connected to the base of the aedeagus by a stout membrane and rotates in a lever-like motion ( Frommer, 1963; Wood, 1991; Sinclair, 2000). The aedeagus of Tipulomorpha is a slender, sclerotized tube, with one or three narrow openings ( Frommer, 1963; Downes, 1968; Wood, 1991; Sinclair, 2000).

Remarks: Details of the male genital tract have been described and illustrated in a number of genera, including, for example, Chionea , Dolichopeza Curtis , and Tipula ( Dufour, 1851; Keuchenius, 1913; Neumann, 1958; Byers, 1961, 1983; Frommer, 1963). The various ducts are usually long and slender, complexly intertwined and consequently not easily studied. Another aspect that differs from other nematocerous families is the central enlarged chamber or seminal vesicle, but the vasa deferentia are also expanded in these taxa and probably also function as seminal vesicles. In the latter, the configuration is similar to the generalized male insect condition as described by Snodgrass (1935: 568, fig. 292). The swelling of the duct where the accessory glands and vasa deferentia meet is also found in numerous Cyclorrhapha.

The vasa deferentia are uniquely fused near their midlength, but remain paired. This fusion is documented in Tipula and Dolichopeza , but does not occur in all Tipulidae (e.g. Dicranomyia ). The fusion of the vasa deferentia also occurs independently in most Syrphidae .

The phylogenetic position of the Tipulomorpha remains disputed. Wood & Borkent (1989) assigned this infraorder as the sister group to the remaining Diptera , whereas Michelsen (1996) included it in the Polyneura (comprising several additional families) representing the sister to all remaining groups of Diptera . However in a ‘note added in proof ’, the evidence supporting the monophyly of the Polyneura remains limited or conflicting because he studied a specimen of another species of Tipulidae , which conflicted with the main body of conclusions for this group. Hence, Tipulidae as a sister group of all remaining Diptera cannot be dismissed on the basis of Michelsen’s results.

Oosterbroek & Courtney (1995) assigned the Tipulidae as the sister group of the Trichoceridae and these together as the sister group to the Anisopodidae + Brachycera based on character states that were either of questionable homology (their characters 47 and 50 are dependent on the interpretation of the segmental homology of the terminal larval abdominal segment), reversals (i.e. characters 76 and 79 are wing venation features that are widespread in dipteran outgroups), or are poorly understood (e.g. only one-third of the ingroup was scored for characters 94 and 96, the remaining were left as unknown). 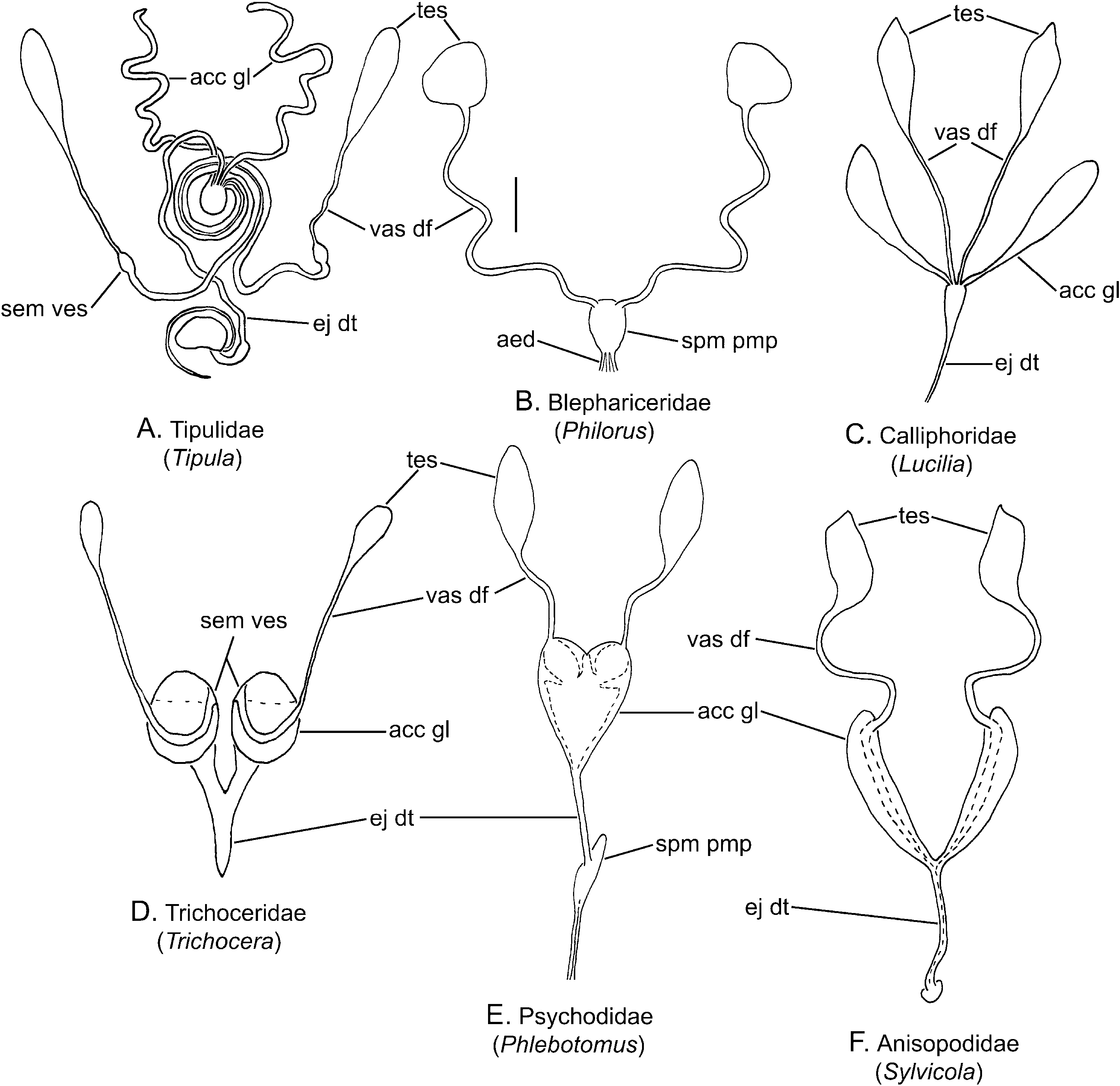