Testis: Each testis is rounded and oval, often thickly clothed with pigment granules (fat cells) and lying along the lateral margin of the accessory gland complex or lying free.

Vas deferens: The apical third of each of the ducts is enlarged in Androprosopa japonica (Okada)   , filled with spermatozoa and terminates near the anterior margin of the first chamber of the accessory gland complex ( Fig. 7A View Figure 7 ). The vasa deferentia are fused medially only for a short distance, prior to entering the gland. In other species, the ducts unite along the midline, lying on the dorsal surface of the fused accessory gland complex ( Fig. 7B View Figure 7 ). The ducts enter the gland complex either just posterior to the anterior margin at the base of small apical lobes ( Austrothaumalea zentae Theischinger   ) or near the midpoint of the anterior section ( Androprosopa americana (Bezzi))   .

Accessory gland and seminal vesicle: The accessory gland complex is divided into a multichambered gland, comprising enlarged, elliptical sacs, united medially, and appearing to be divided into three to four pairs of chambers. In both Androprosopa species   examined, the anterior-most chambers are much larger. In Androprosopa japonica   , the middle and posterior pairs of chambers are oval and rather stout ( Fig. 7A View Figure 7 , the middle chamber is hidden by the curvature of the vasa deferentia). The opaque condition of the genital tract of the other two species prevented clear determination of the inner divisions of the gland. Austrothaumalea zentae   was characterized by a small apical pair of chambers or swellings on the anterior end of the accessory gland complex ( Figs 5D View Figure 5 , 7B View Figure 7 ). No seminal vesicle was identified.

Ejaculatory duct: The modified accessory gland complex empties posteriorly into broad, paired ejaculatory ducts. The ejaculatory ducts fuse to form a single, wide duct just prior to the external genitalia. The duct appears to be encircled by a layer of circular muscle and is characterized by a deep Z-like bend near the midlength.

Ejaculatory apodeme, sperm pump, and aedeagus: The aedeagus is represented by a flexible membranous tube ( Fig. 8B View Figure 8 ), and the sperm pump and ejaculatory apodeme are absent. Dorsally, the aedeagus and flexible phallotrema are supported by the parameres, and ventrally by the ventral or gonocoxal plate ( Fig. 8A, B View Figure 8 ). The parameres are normally paired structures, articulated with the gonocoxal apodemes. In Thaumaleidae   , the ventral plate (= gonocoxal plate) is a simple, rectangular, thinly sclerotized plate broadly fused laterally to the gonocoxites ( Sinclair, 2000: fig. 17). This plate lies nearly parallel to the gonocoxites, angled obliquely dorsally.

Remarks: The male genital tract of Thaumaleidae   is here described and illustrated in detail for the first time. The configuration of the male tract was briefly described by Sinclair (1992a), but no figures were provided. In this study, three species were examined in detail and the configuration of each conforms to that of other Chironomoidea   .

The homology of the anterior-most chamber in Austrothaumalea zentae   remains uncertain. This small chamber is probably associated with the subapical position of the vas deferens and may function as a seminal vesicle. The subapical termination of the vasa deferentia in Thaumaleidae   is similar to that of the Dixidae   , whereas in other Chironomoidea   the ducts enter apically. 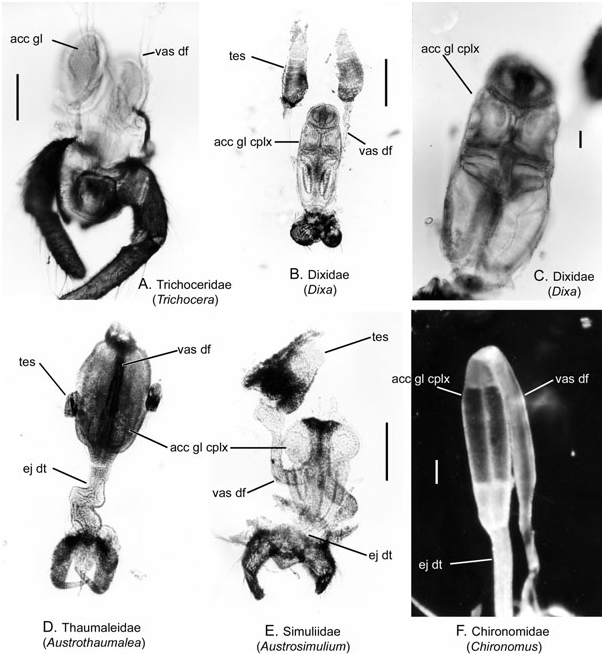 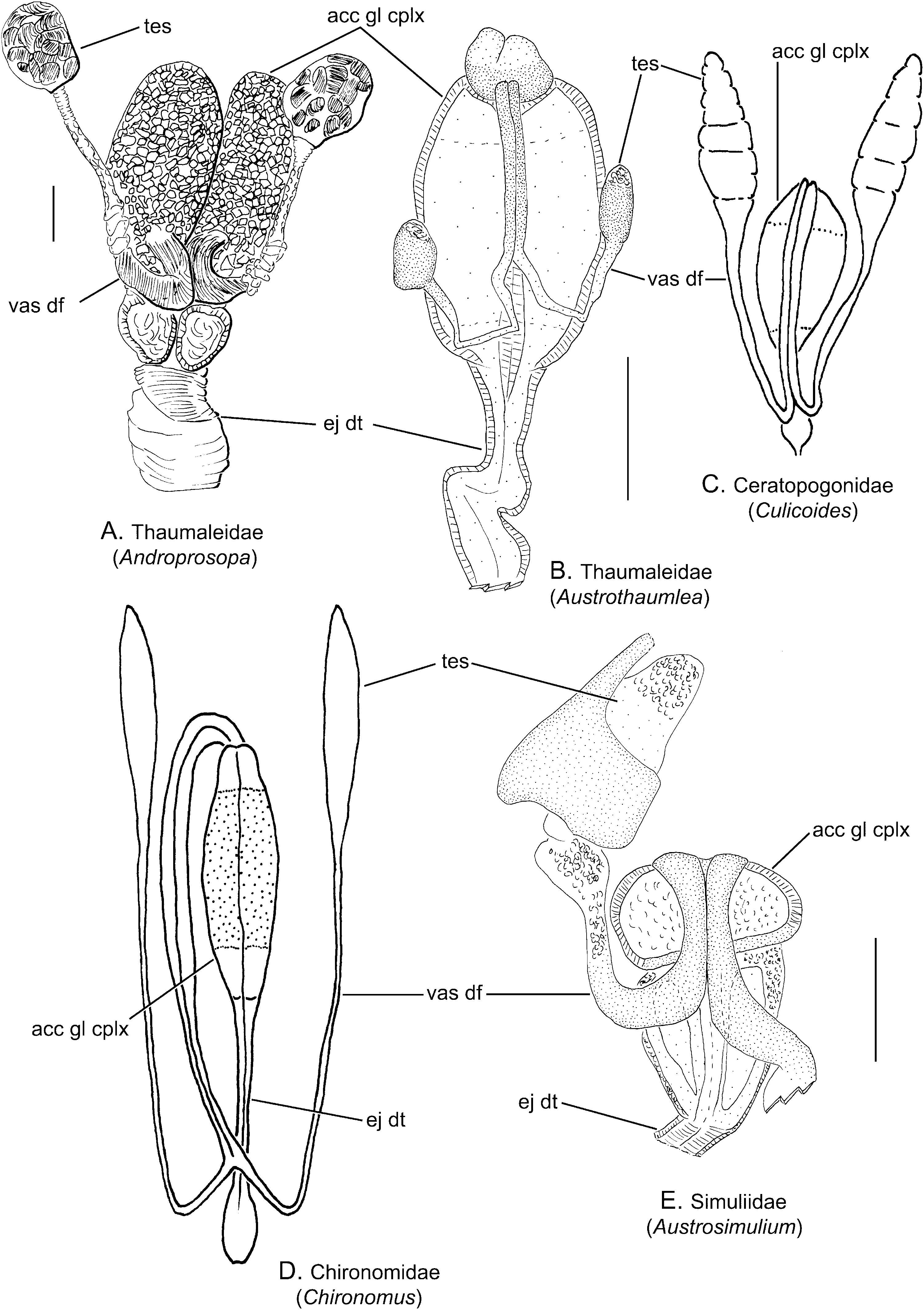 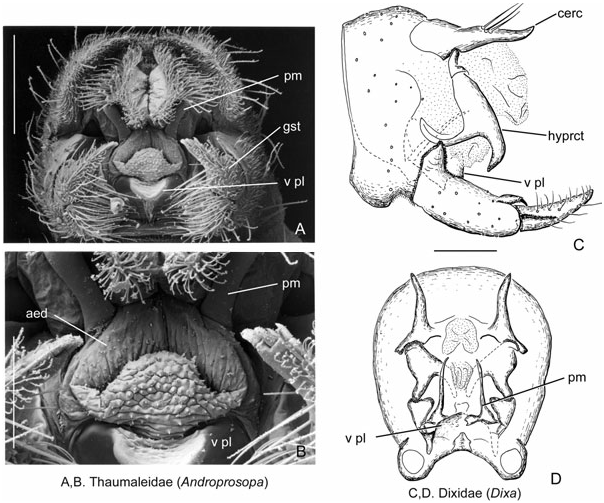