Designated herein, explicitly supporting the neotype: Afghanistan: Kandahar Province, near Kandahar, Schultes, XII.13-20.1971 (ECON 26505). Fig. 5b View Figure 5 . The ICN defines an epitype as a specimen selected as an interpretive type when the holo-/lecto-/neotype is suboptimal for critical identification ( Turland 2018). ECON 26505 serves as an epitype because its morphology unambiguously agrees with the widespread concept of “Indica”. ECON 26505 also serves as a typotype - a photograph of the specimen, when alive and in the ground, which appears in Schultes et al. (1974), and is reproduced in Suppl. material 1: SF.8.

Plants with THC% ≥0.3% in inflorescence and a THC/CBD ratio <7 (almost always >1); central leaflet length:width ratio <6 in fan leaves near the base of inflorescences; mature achenes usually ≥ 3.6 mm long, the perianth mostly sloughed off, lacking a prominent protuberant base, and lacking a well-developed abscission zone that allows easy disarticulation.

Dried female inflorescences: THC ≥0.3, in late 20th century accessions nearly always >1.0%; literature weighted x¯ = 5.69%, up to 14.5%. This variety expresses the highest total THC%+CBD% (a measure of relative resin content of the plants, since these two cannabinoids usually dominate the resin) of all varieties, which correlates with its dense covering of glandular trichomes. Its THCV%+CBDV% content is lower than South Asian populations; Hillig and Mahlberg (2004) report a mean of 0.14%. Terpenoid profile imparts an acrid or “skunky” aroma, and uniquely expresses sesquiterpene alcohols, such as guaiol, γ -eudesmol, β -eudesmol, and the monoterpene alcohol nerolidol, as well as hydroxylated terpenoids, such as γ -elemene, a -terpineol, and β -fenchol.

Allozyme and DNA studies that segregated Central Asian and South Asian domesticates are detailed in the genetics section of Variety 1. Onofri et al. (2015) identified a SNP in the gene that encodes THCA synthase that was unique in two Afghani accessions and a Moroccan " hashīsh landrace" (their SNP accession code no. 1179, A→T transversion). It was not present in 16 other accessions of fiber- and drug-type plants.

Vavilov (1926) characterized afghanica   as "a morphological link between the wild and the cultivated races of hemp." However, evidence in Vavilov and Bukinich (1929) suggests a domesticated phenotype (argued in Suppl. material 1: SF.6). Small and Cronquist (1976) treated afghanica   as a domesticate, synonymized under C. sativa subsp. indica var. indica   . Small (2018) commented, "The characteristics of indica   type marijuana are highly consistent with those of an advanced cultigen. Like modern oilseed cultivars, they are short and compact, an architecture reducing diversion of energy into stem production and increasing harvest index for the desired product (inflorescence). Even the foliage (with very large, wide leaflets) is consistent with the trend described earlier of advanced cultigens often manifesting larger leaves than their wild and more primitive cultivated relatives. When indica   type strains are allowed to set seed (they are normally harvested for flowering material) the infructescences are very dense, preventing most of the seeds from falling away and being distributed naturally - another indication of considerable domestication." The prominent sugar leaves in the inflorescence may be another indication of domestication, as these likely increase photosynthate production very close to the developing flowers and their perigonal bracts. 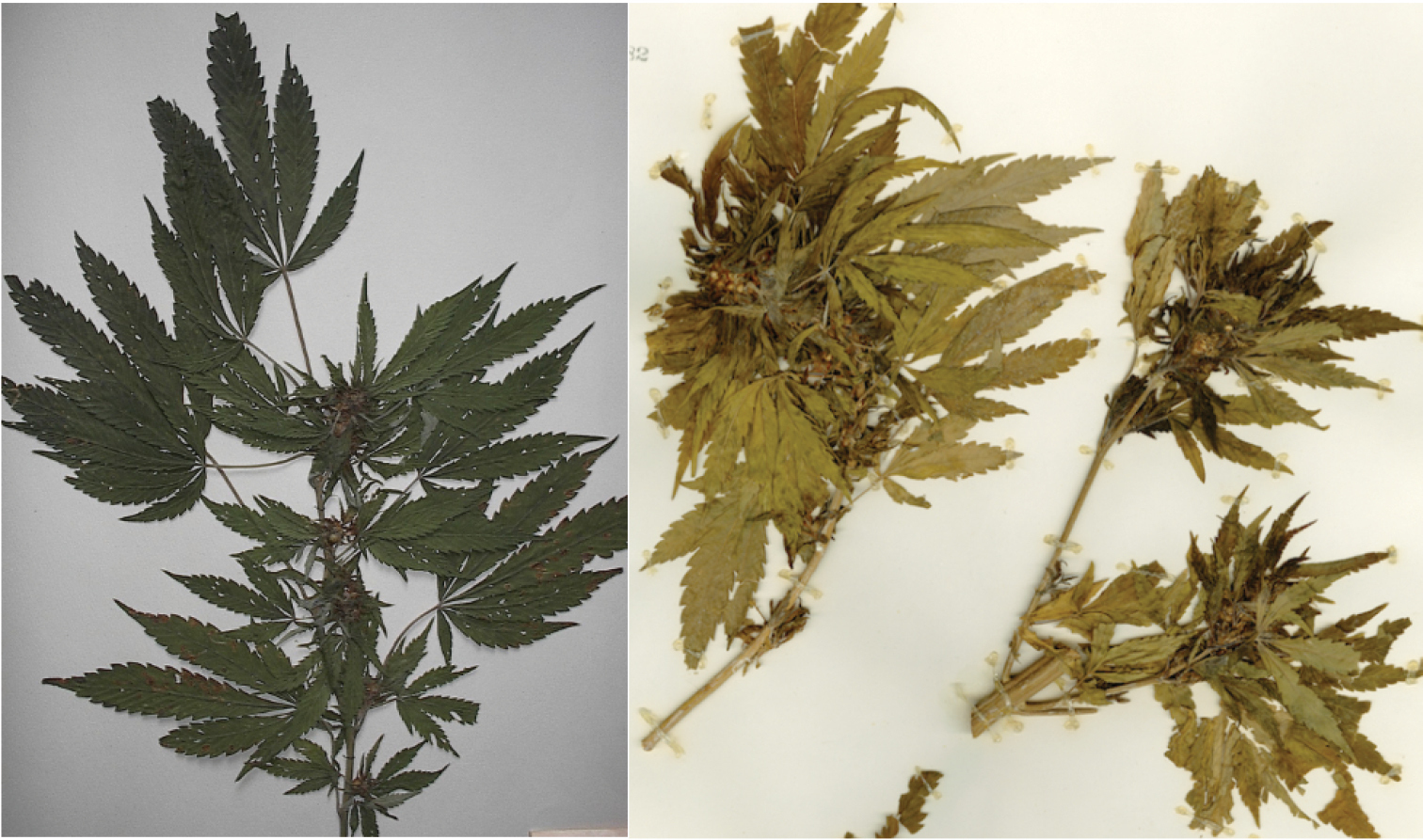