Skeleton. The choanosome is divided into honeycomb-like chambers, thick reinforced tracts of anisostyles, forming meshes that are elliptical in shape ( Fig. 10 View FIGURE 10 ). Within and between the chambers and convoluted layers the skeleton consists of an ill-formed, irregular reticulation of small anisostyles; these tracts range in width from 100– 350 μm. Microscleres are isochiadiscorhabds, and these are abundant throughout the choanosome. The ectosome is composed of a thick, dense feltwork of tangential and paratangential anisostyles approximately 100 μm wide. This layer is present in the fistulae, with anisostyles disposed in a compact regular vertical to oblique arrangement supporting the cauliform areolate structures. A single layer (sometimes double layer) of erect isochiadiscorhabds (45 μm wide) lines the surface of the ectosome ( Fig.10 View FIGURE 10 ).

Substratum, depth range and ecology. Locally common off East London, Amathole region and Port Elizabeth, Evans Peaks, at a depth range of 30 to 55 m in areas with strong current.

Etymology. The species name reflects the type locality, Amathole, a district in the Eastern Cape, South Africa. “Amathole” means “calves” in the Xhosa language, and refers to the forested mountain range that forms the northern boundary of the district.

Remarks. Tsitsikamma (T.) amatholensis sp. nov. was first collected in 2010 but identified only as “ Tsitsikamma sp. undescribed” based on the external morphological characteristics and isochiadiscorhabd structure (TS unpublished data) of the specimens. Matcher et al. (2017) generated partial 28S rRNA sequences for six Tsitsikamma specimens collected from the same locations as the 2009/2010 collections and confirmed the presence of two unidentified Tsitsikamma species (see Table 1 and Fig. 3b View FIGURE 3 in Matcher et al. 2017). Parker-Nance et al. (2019) described a new species from these collections (Evans Peak) as T. michaeli , an observation we confirmed after re-examining all the Walmsley/Matcher specimens (Supplementary Table S1). The other Walmsley et al. (2012) specimens were identified as T. (T.) favus by TS. The second unidentified Tsitsikamma sp. is here described as a specimen of Tsitsikamma (T.) amatholensis sp. nov.

In Algoa Bay T. (T.) amatholensis sp. nov. is sympatric with T. (T.) favus , T. pedunculata and T. michaeli and in Amathole the species is sympatric with the other new species (as described below), and can be differentiated on subtle differences in colour, gross morphology and isochiadiscorhabd morphology. The gross morphology of T. pedunculata and T. michaeli are, however, quite different from those of T. (T.) favus and T. (T.) amatholensis sp. nov., forming the basis for establishment in this work of a new subgenus Tsitsikamma (Clavicaulis) subgen. nov. 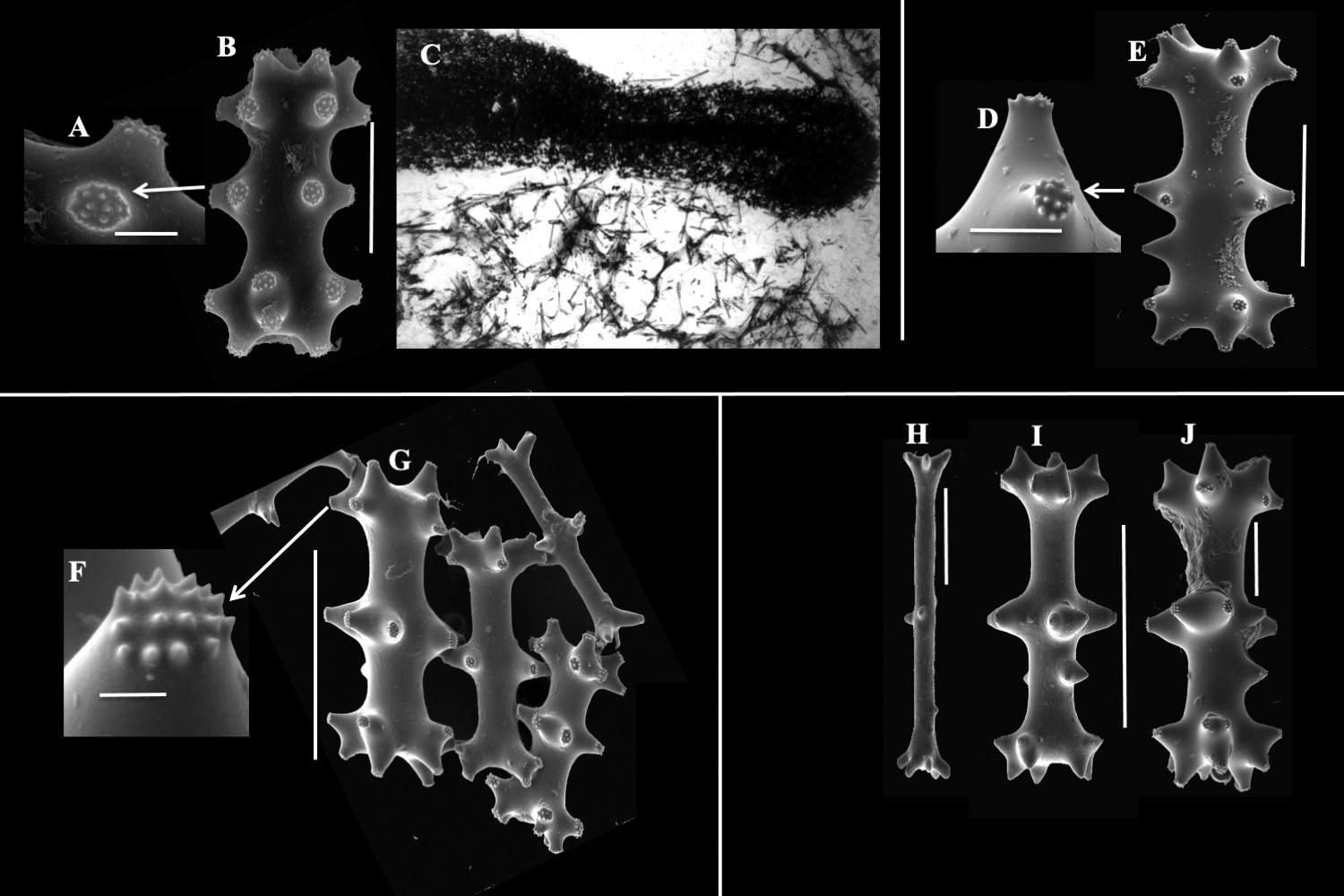 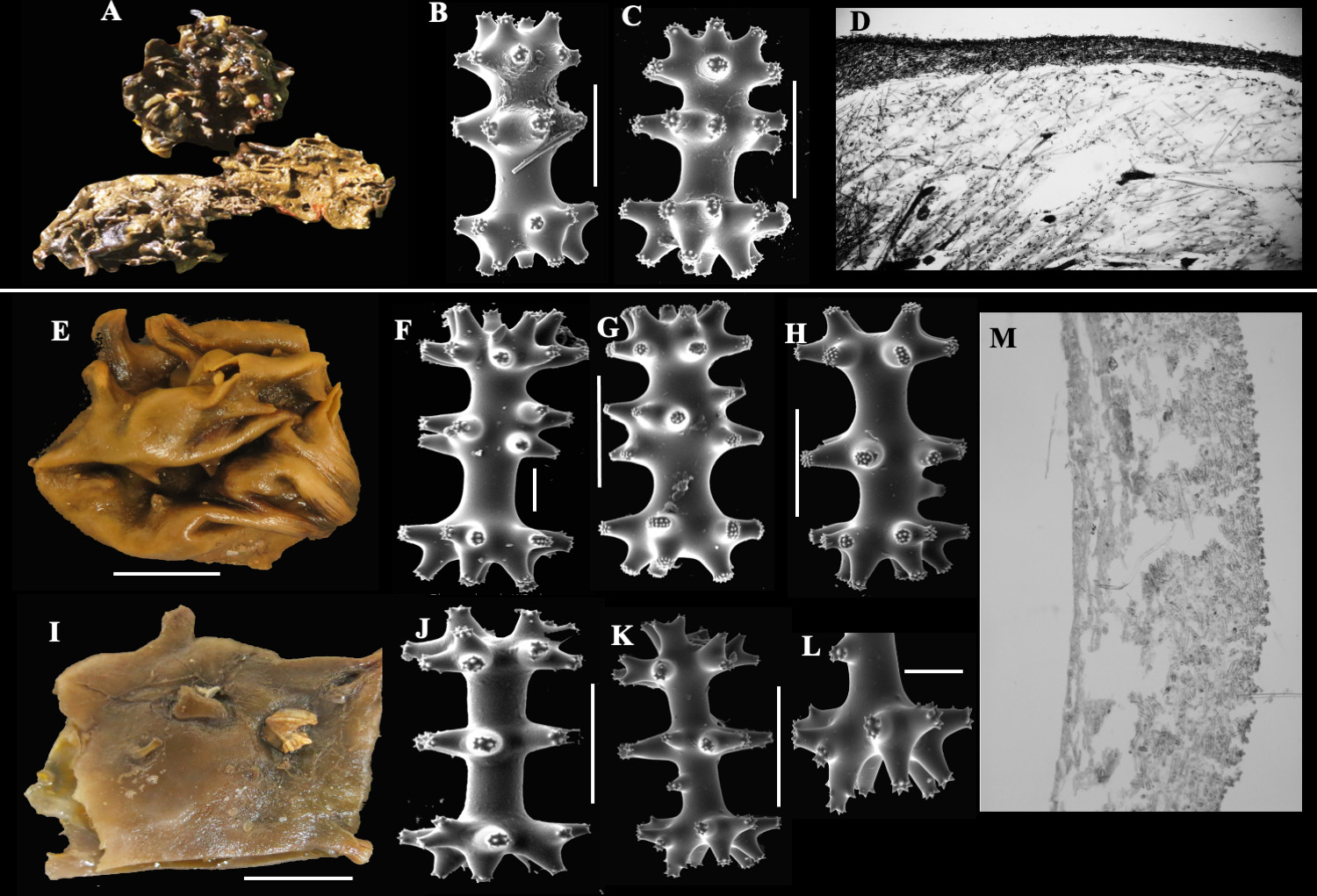