The Peckhams (1903) did not report the number of males of this species that they examined, but it is quite possible that their description of the male combines characters from two different species. Only two male Thyene Ogdenii   (now T. ogdeni   ) were found in the Peckham Collection, both from Mashonaland, Zimbabwe (MCZ:IZ:151907). The first ( Figure 5 View Figure 5 ) has rows of dark spots on the dorsal opisthosoma and was apparently the basis for the Peckhams' figures of this species. The pedipalp has a 2-3 coil embolus and a relatively long RTA with a single serration on the distal margin. A single, relatively small tooth is present along the posterior fang groove.

A second male specimen in the same container ( Figure 6 View Figure 6 ) may represent a different species, corresponding to the text description that agrees with Thyene crudelis   (= T. coccineovittata   ), but not the published figures. This male has a pedipalp with a shorter RTA and 4-5 coils of the embolus, and the pattern on the dorsal opisthosoma is altogether different from that of the first male. The first male agrees with the recent description of T. ogdeni   by Wesołowska & Haddad (2009). The second male, and the published text of the Peckhams' description, could be excluded from the description of that species.

appearance of the dorsal opisthosoma, the relatively small RTA, and the many-coiled embolus suggest

that this may be a T. crudelis   (= T. coccineovittata   ). 1, Dorsal opisthosoma showing light central band

and pigmented lateral margins. 2, Mirror-image of right pedipalp and chelicera. This was the only

There are 19 specimens of the female Thyene ogdeni   in the Peckham collection ( Table 2; Figures 7-8 View Figure 7 View Figure 8 ), and these are all similar, with a pigmented band, interrupted by several pairs of light spots toward the rear, on either side of a light middorsal opisthosomal band. The epigynum is lightly sclerotized except for a variably sclerotized, anterior ovoid fossa ( Figure 8 View Figure 8 ). When compared with T. pulchra   (see below), the epigynum of T. ogdeni   has much heavier sclerotization of the fossa and plate margins. The Peckhams (1903) provided only a brief and insufficient description of these females, but based on specimens in the Peckham Collection, Wesołowska & Haddad (2009) should be taken as the reference description for both males and females of this species. Lessert (1925) also described both sexes of T. ogdeni   in a manner that agreed with specimens in the Peckham collection. He supplied a useful description of the epigynum of this species (here translated from the original French): Epigynum a testaceous plate, rounded, slightly indented at the back in the middle of the posterior border, furnished with a more or less uniformly rounded and roughened brown interior plate, finely rimmed, separated from the posterior border by an interval equal to or a little larger than its diameter, corresponding exactly to Figure 2D of Peckham. Apparently the sclerotized rim encircling the larger epigynal plate, now evident in preserved specimens from the Peckham Collection ( Figure 8 View Figure 8 ), was not visible some 116 years ago when these were examined by the Peckhams.

Thus the synonymy of the female T. ogdeni   (as described by the Peckhams) with T. coccineovittata   , proposed by Berland & Millot (1941), cannot be supported.

white spots toward the rear on either side of the light middorsal band of the dorsal opisthosoma. 1, 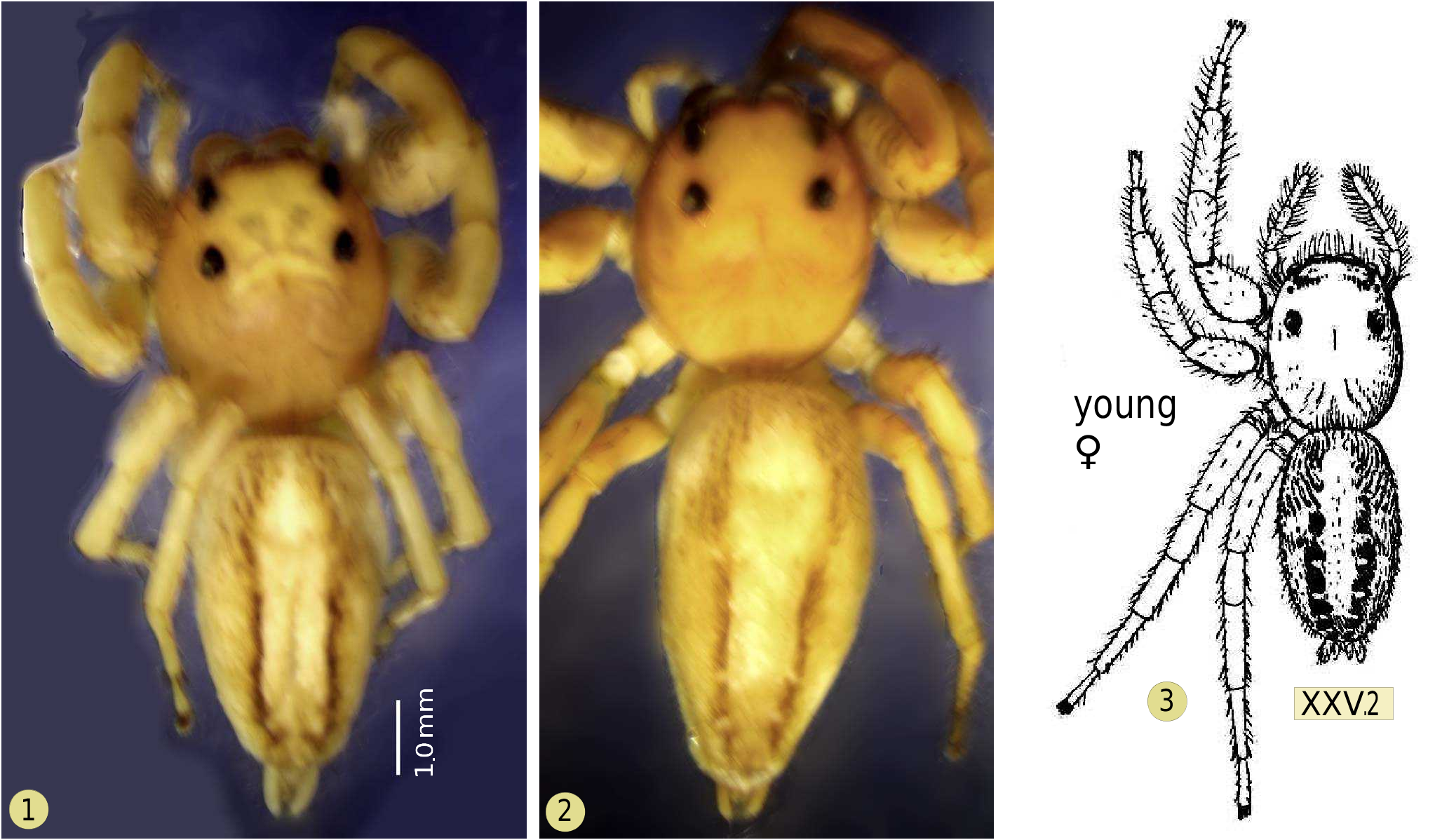 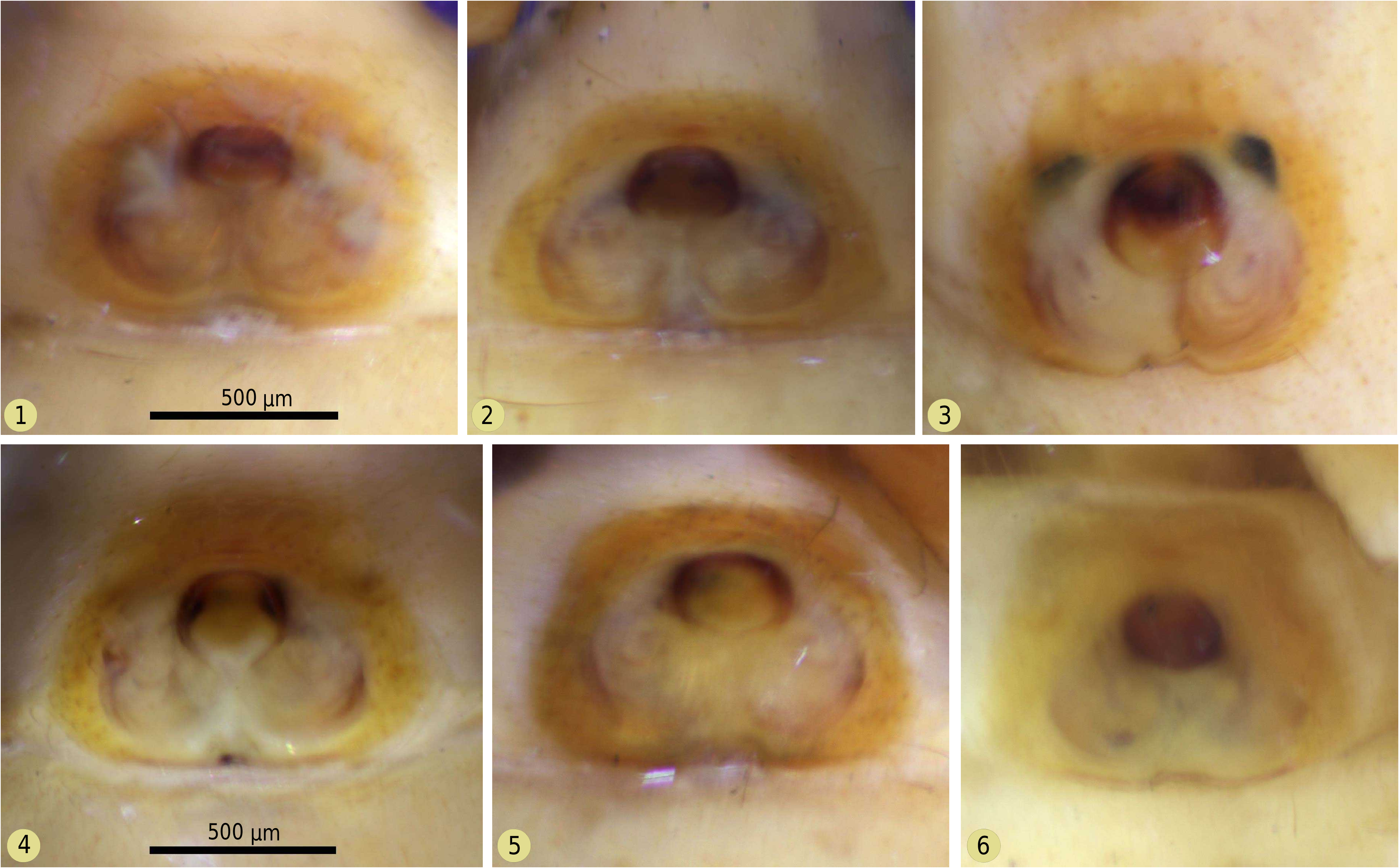