Worker description: In full-face view, head subquadrate, longer than broad (CI 76–84). Mandibles weakly striate, shining, and armed with five teeth: the apical-most well developed, followed by a smaller preapical tooth, which is followed by three equally developed smaller teeth. Anterior clypeal margin entire and evenly rounded. Antennal scapes short: when fully retracted, failing to reach the posterior margin of the head capsule by about the maximum width of the scape (SI 87–99). Antennae 12-segmented; antennal club of three segments, with the apical-most segment one and a half times longer than the preceding two in combination. Frontal carinae short, extending past the antennal toruli by one and a half times the maximum width of the antennal scape. Compound eyes weakly protruding past the lateral margins of the head capsule. Lateral margin of head very weakly convex, nearly flat, giving the head a boxy appearance. Posterior head margin flat to very slightly concave, rounding evenly into the lateral margins.

In profile view, compound eyes ovular and moderately large (OI 21–25), with 9 ommatidia in longest row. Pronotal declivity distinct, with neck and anterior face of pronotum forming a rounded ~130 ° angle; anterior and dorsal faces of pronotum forming a rounded ~140 ° angle. Mesosoma evenly, but weakly, convex dorsally from where it joins the pronotal declivity to the propodeal spines, nearly flat. Promesonotal suture extending from the posterior margin of the procoxal insertion only to the mesothoracic spiracle, which is well developed. Metanotal groove nearly entirely absent: only visible as a faint disruption in the surface sculpture between meso- and metacoxal insertions to the minute metathoracic spiracle, which is nearly indistinguishable against the ground sculpture. Propodeal spiracle weakly developed, directed posterolaterally, and separated from the propodeal declivity by about three and a half spiracle diameters. Propodeal spines well developed, moderately long (PSI 27–36), about as long as the propodeal declivity, tapering evenly from the base, very weakly downcurved, and acute. Propodeal declivity straight and flat, forming a rounded ~100 ° angle with the base of the propodeal spines. Propodeal lobes rounded and very weakly developed. Metapleural gland bulla small, extending from the metacoxal insertion halfway to the propodeal spiracle. Petiole moderately long (PLI 128–187), without tubercles anterodorsally. Subpetiolar process in the form of a weakly developed, acute, triangular tooth; ventral margin of petiole strongly concave posterior to it. Petiolar peduncle short, comprising about a quarter of the total length of the petiole. Petiolar node robust: grading evenly into the petiolar peduncle anteriorly, anterior face concave; anterior face forming a rounded, ~90 ° angle with the dorsal face, which is evenly, strongly convex; dorsal face rounding evenly into the posterior face, which forms a ~110 ° angle with the caudal cylinder. Postpetiole evenly rounded anterodorsally, before flattening posterodorsally; weakly lobed ventrally.

In dorsal view, humeri weakly developed: rounded and only slightly wider than the rest of the mesosoma; mesothoracic spiracles weakly protruding past the lateral margins of the mesosoma, visible as slight angles where the pronotum meets the mesonotum. Metanotal groove absent: mesonotum and propodeum completely fused and converging evenly to the bases of the propodeal spines. Propodeal spines broadly approximated basally and diverging apically, their apices separated from each other about their length; negative space between them a “U”. Petiolar peduncle with spiracles barely protruding past the lateral margins; not constricted anterior to them. Petiolar node ovular, subtly narrowed anteriorly, slightly wider than the peduncle, and evenly grading into the caudal cylinder, which is the same width as the node. Postpetiole moderately to very broad (PWI 215–255) and campaniform, articulating with nearly the entire anterior margin of the gaster, leaving small angulate margins on each side exposed. Anterior margin of the postpetiole flat, with corners evenly rounding into the lateral margins, which evenly diverge to the angulate posterior corners; posterior margin broadly concave. Metafemur weakly to moderately incrassate (FI 202–285).

Setae: antennal scapes and funiculi with short, adpressed pilosity. Dorsum of head, mesosoma, waist segments and gaster with short, erect, blunt-tipped setae, some of which are nearly clavate; the longest setae are roughly the width of the compound eye. The head bears ~32, mesosoma ~16, petiole 2, postpetiole ~10, and first gastral tergite ~26 setae. Sparse, adpressed pubescence present on the entire body, but only apparent on the darker colored integument.

Gyne: Too damaged to describe.

Etymology: Behavioural, from the Latin ‘terra’ (= earth) + ‘colere’ (= dwelling), in reference to the nesting habitat of this species.

Comments: Temnothorax terricola   is mostly known from the Guantanamo region in eastern Cuba. The type series was collected from under a stone in low elevation pine forest near Baracoa. Two more series were collected by Phil Ward: stray ground foragers were collected at bread crumb baits on the edge of disturbed rainforest just north of Baracoa, and several more workers were recovered from Winkler leaf litter extraction in mid-elevation mixed Pinus cubensis   and broadleaf evergreen forest. This species was reported from the Nipe-Sagua-Baracoa mountain range in Cuba in a survey by Ferrer & Triana (2004), which is consistent with the previous collections; I have not been able to personally examine these specimens, however. This species, like other members of the pulchellus   group, is probably ground or leaf litter nesting. The original description by Mann (1920) notes that this species has a dark brown to black head and gaster. Perhaps the intensity of the integumental coloration in the type series has faded with time, but all of the specimens from the type series that I have observed are dark to medium brown. The two series collected by Phil Ward are substantially lighter, with the head and gaster medium brown, while the rest of the body is light brown; the lateral surface of the pronotum is also slightly less densely sculptured than the type series, shining through weak areolate sculpture. This species has long been suspected to have close relationships to other members of the salvini   clade, specifically members of the pulchellus   group: T. albispinus   , T. ciferrii   , T. flavidulus   , and T. pulchellus   . In the first formal morphology-based phylogenetic work including this species, Fontenla Rizo (2000), while not including all of the taxa in Baroni Urbani’ s pulchellus   group, corroborated these relationships to some degree, with the caveat that T. terricola   and T. torrei   fell outside of this group. Combined molecular and morphological analyses (Prebus, in prep.) mostly agree with Fontenla Rizo (2000). 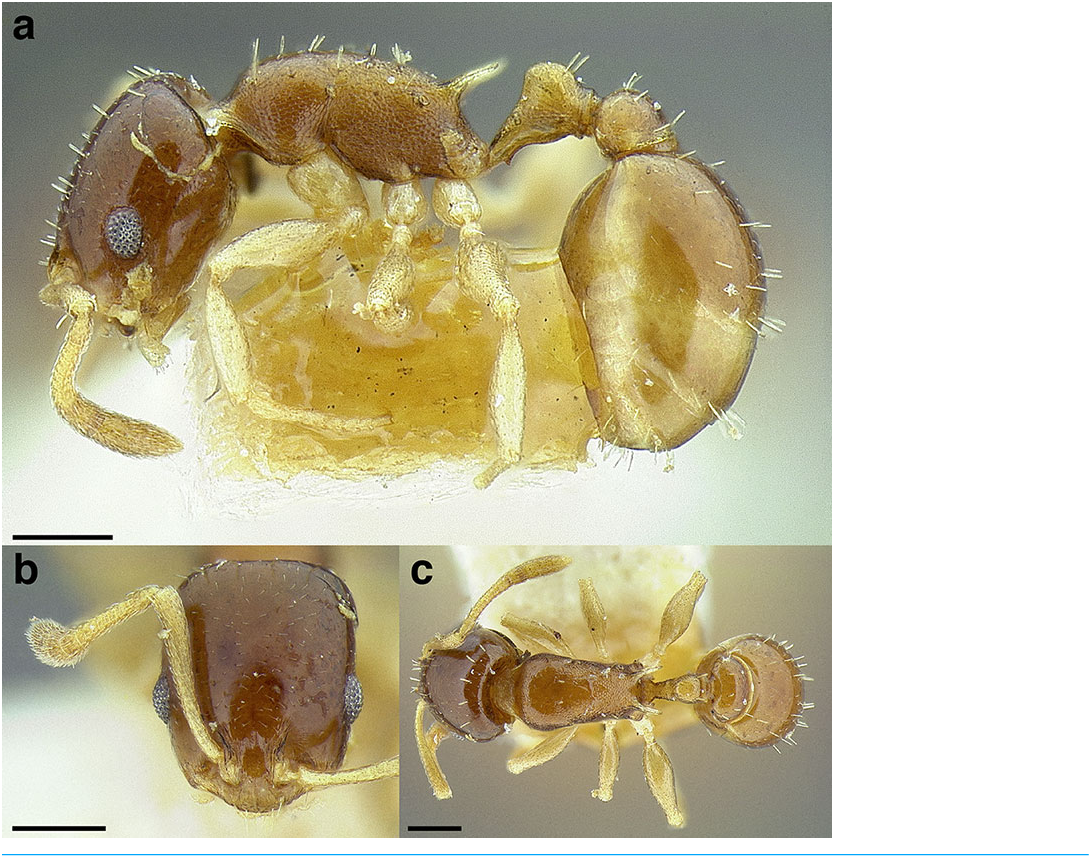