FEMALE. Length of fore wing 9.5–14 mm; MWH/DLH 2.4, head in frontal view not very low, FHH/intOW 0.95; clypeus very wide, H/WClp 0.83, median angle only moderately projecting below, apex widely truncate ( Fig. 97 View FIGURES 97–100 ), its width corresponding to about 1/2 the height of an antennal socket, lateral margin sinuous, often rather detached and narrowly separated from eye; malar space not excessively narrow, a little more than 1/ 3 of the height of an antennal socket; tentorial pit as close to eye as to antennal socket or a little closer to the latter; mandible anterior surface without a prominent border; antennal scape very short, L/Wesc 2.3; occeli usually widely separated, POL up to 2.6 diameters, POL/OOL about 2/3 or a little more; occipital region at sides sometimes appearing as if “compressed” behind upper lobe of the eye, occipital margin distinct and very salient dorso laterally producing a corresponding slight depression behind the eye lobe; gena almost as wide as the upper lobe of the eye in lateral view; foraminal area shaped ventrally as a shelf; hypostomal lamella narrow; mesosoma very robust as seen from above, pronotum short and wide, fovea large and deep, with acute anterior border, region just below noticeably protuberant, anterior margin of pronotum medially with the lamella narrow and reflexed, region just behind continuous not raised into secondary margin, humeral angle usually very prominent, carina moderately elevated, curved and reflexed at sides, forming a definite salient lateral lobe, at times strongly projecting forwards, carina as seen from above more often straight, total width distinctly larger than that of mesoscutum, this slightly longer than wide, L/WMsc 1.03; fore wing short, LDis/HMpl 2.14, pterostigma about 2.7 times longer than wide; inner claw of hind tarsus with the apex rather round; propodeum oblique and variably shortened posteriorly, longer in larger specimens, median furrow variably wide and deep, occupying almost the whole dorsal surface, looking narrower and triangular in larger specimens, anterior region of propodeum adjacent to metanotum protuberant only at sides, valve as a high narrow triangle, sometimes less visible in lateral view; first segment of metasoma very short, LSI/ HMpl 0.87 or a little more, variably wide and dorsally convex (Figs. 43–45), apical region about 2.4 times wider than the base, sometimes with a distinct petiole, spiracles not prominent, basal sternum flattened, its lateral limit with the sternum just marked, lateral edge not very prominent but often shining.

Pilosidade: body in general with hairs fairly long, clypeus and whole face with whitish hairs showing silvery reflexes, outstanding hairs of frons often long, at times exceedingly so, lateral region of occiput adjacent to carina with a very distinctive spot of transversely directed hairs originating at a position situated inwards relative to the mesal border of the eye; eye with short not very distinct hairs.

Color: black; tegula, legs, dark brown; ventral marginal area or sometimes most of clypeus, mandible, reddish brown; inner orbit to level of antennal socket, gena adjacent to eye, apex of antenna below (sometimes), scape ventrally, anterior margin of pronotum, region around fovea, carina at sides and posterior margin of pronotum, reddish orange or ligther yellowish brown; apex of femora, yellow; most of wings basal membrane and hairs, also including pterostigma, black or blackish; apical part of fore wing from second submarginal cell to the apex with membrane hyaline and hairs white, veins of the apical region light yellowish brown; rarely the apex of the fore wing not pale colored, but with the more usual dark brown hairs and veins.

Color: similar to female; apex of antenna with the inner aspect yellow.

NEST. Ducke (1904, fig. 5a,b,c) shows photographs of one nest with about 45 cells, the comb being subcircular and the peduncle short and central. Zikán (1949, figs. 405, 406), under the name M. ater   , shows two nests both with about 70 cells but differing in shape, one more oval, and the other composed by two segments forming an obtuse angle, the short peduncle being localized exactly on the vertex. One nest from Pará, Caxiuanã (Silveira & Dias; MPEG), with 21 cells, had a subcircular comb.

Megacanthopus imitator   was described and subsequently synonymized by Ducke (1904, 1905b) under Megacanthopus ater   (= Mischocyttarus socialis sensu Bequaert, 1943   ). Richards (1978) revalidated the name Mischocyttarus imitator   only for the specimens collected by Ducke in Marajó, considering these as distinct from the other Amazonian forms (treated by him under the name M. socialis   ). He considered that the strongly prominent humeral lobes and relatively longer first metasomal segment of larger specimens in Ducke’s original series were indicative of specific status. However, these features do not seem to be perfectly correlated, since a similar shaped pronotum has been also observed in smaller specimens with a shorter first metasomal segment. Furthermore, there is variation on these characters even among Ducke’s original specimens (MPEG collection) (this being admitted by Richards; 1978: 297). It is reasonable to consider M. imitator Ducke   as the same species occurring widely in northern South America (and with a new record in Panama). Mischocyttarus goyanus Zikán   differs only by a small color variation on apex of the fore wing identical to that observed in the form described   by Bequaert (1938) as M. ater var. uniformis   from Trinidad, which is now also recorded from Venezuela. Mischocyttarus communalis   was described by Richards (1978) for Peruvian specimens (Junín and Huánuco) presenting a “much narrower first gastral tergiste”. Such a non­trivial difference may be easily perceived in more typical specimens (Fig. 43). However, almost all of the available specimens are from Junín (most collected by Weyrauch) or Huánuco, there being only two additional specimens from Madre de Dios, and a third one from Bolivia, Santa Cruz. The two from Madre de Dios were collected by the same person on same date and may have well been nest mates, and one of them is evidently intermediate (Fig. 44) with respect to the more common “Amazonian” form (Fig. 45). It is thus problematic to found a species’ concept on a continuous character for which we have evidence of limited diagnostic power.

Mischocyttarus imitator (Ducke)   is the oldest name that may be applied to this set of forms here considered as one species. The name M. socialis (Saussure)   used by Richards (1978: 299) applies to another species of the group occurring in southern South America (see above). 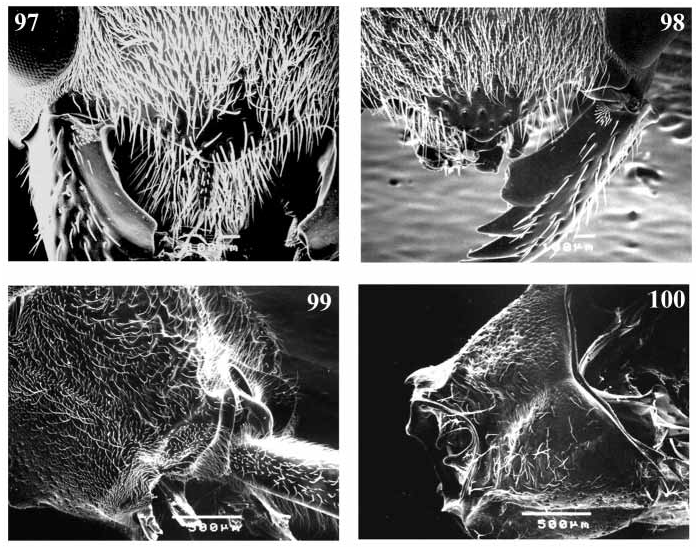