Lychnophora osanyiniana is recognized by the following combination of characters: arborescent habit, glomerulate capitulescence with subinvolucral bracts surrounding sessile heads, giving the appearance of a single head, and uniseriate pappus. These characters together set it apart from the other species of the genus.

Distribution and habitat: —The species is known only from one collection in “campo rupestre” of Serra dos Alves, localized at the eastern portion of “Cadeia do Espinhaço”, near to the Parque Nacional da Serra do Cipó, Minas Gerais State. The species grows in a location composed mostly by herbs, subshrubs and shrubs on the rocky outcrops of quartzite and sandy soil, at an altitude of more than 1,400 m. Although Lychnophora osanyiniana was collected outside the protected area, the “Sítio Santa Rita” will be preserved as an environmental compensation area, under the Minas Gerais forestry policies and biodiversity protection law ( Minas Gerais 2013).

Flowering and fruiting: —Specimens with flowers were found in March.

Conservation status: —According to the IUCN (2019) criteria and categories, the Lychnophora osayiniana is Critically Endangered (CR) (criteria B2a,bv and D), since the species was collected only in one locality, with an area of occupancy less than 10 km 2 (B2a,bv) and the number of mature individuals is less than 10 (D). Since July, 2016, the botanists of the “Sete Soluções e Tecnologia Ambiental” company are doing floristics expeditions monthly to the eastern of “Cadeia do Espinhaco Range” and a large area around the “Sitio Santa Rita” was surveyed, but no other L. osanyiniana population was found. Since L. osanyiniana is known only from its type population situated outside a conservation area and in an ecosystem constantly threatened by mining and agriculture, we suggest the species can be assessed as Critically Endangered.

Etymology: —The specific epithet osanyiniana is in honor of Òsanyìn. According to Verger (2018), Òsanyìn is an òrisà (deity of African diaspora religions) who holds the power of liturgical and medicinal plants (as the “arnicas da serra”). Moreover, the microendemic characteristic of this new species in a preserved place resembles the god Òsanyìn, who prefers to stay away from human life, since he is also a forest god.

Discussion: — Lychnophora osanyiniana is characterized by its type of capitulescence and the number of pappus series. It is important to highlight that the type of glomerule of the new species is unique to the subtribe Lychnophorinae. Generally the subinvolucral bracts found in clustered heads are associated with pedunculated heads that form pseudoglomerules , as we can see clearly in Proteopsis Mart. & Zucc. ex Schultz-Bipontinus (1863: 378) . However, in the new species the heads are sessile and form a cluster or glomerules that is surrounded by the subinvolucral bracts.

The other diagnostic character is the uniseriate pappus. In the genus Lychnophora only three species show this type of pappus: L. grisea , L. haplopappa and L. uniflora . Despite this character being common among these four taxa, only L. haplopappa has a similar habit to L. osanyiniana . The two other species have a caulirosula habit. However, L. haplopappa and L. osanyiniana are distinct with regard to the type of syncephalia, number of heads in each glomerule and number of flowers per head (see Table 1). Lychnophora osanyiniana also resembles L. brunioides Martius (1822: 149) , a species with uncertain position within Lychnophorinae ( Loeuille et al. 2019). The habit, shape, size of leaves and number of flowers per head are the same, however L. brunioides has glomerules without subinvolucral bracts and biseriate pappus. 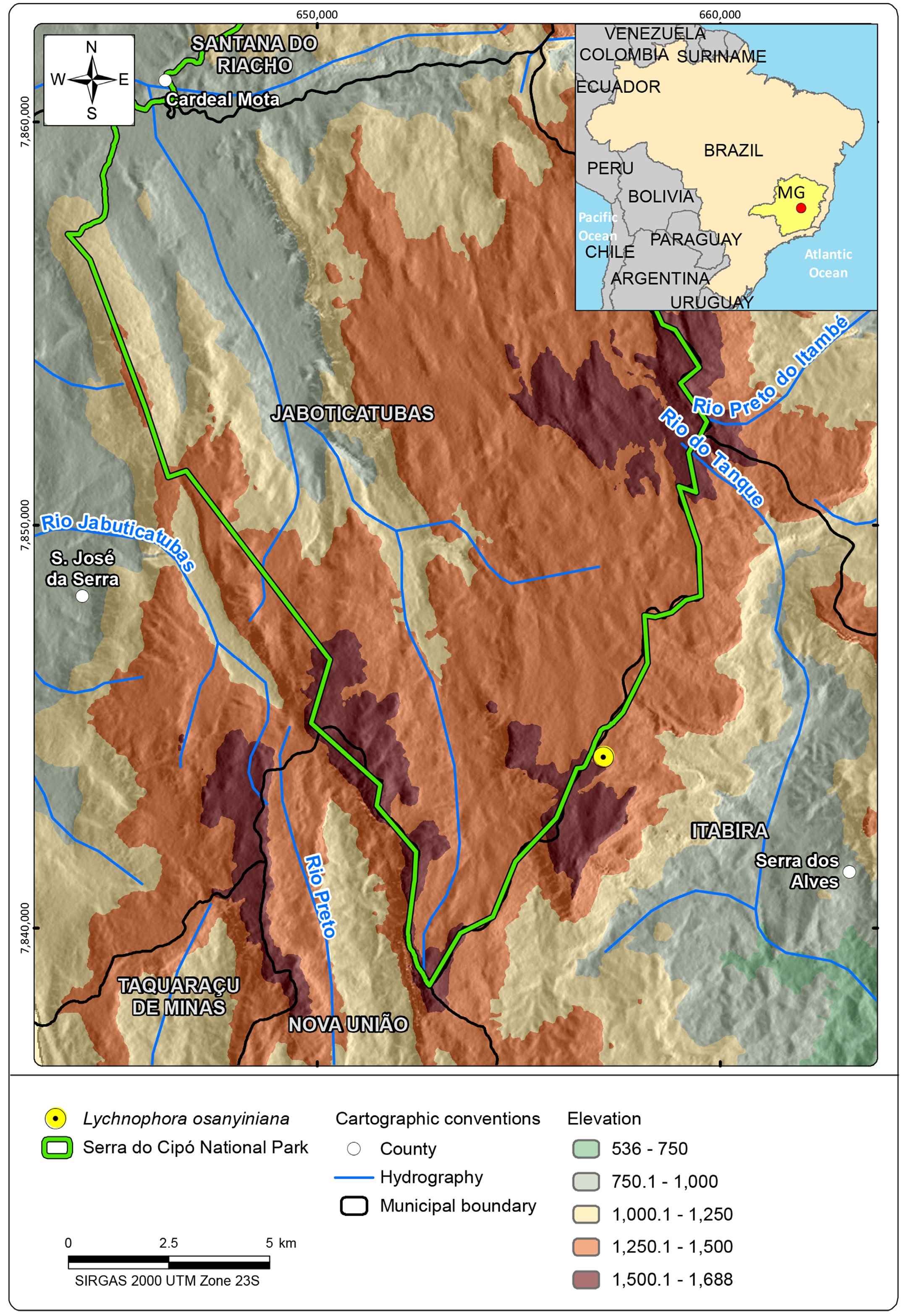 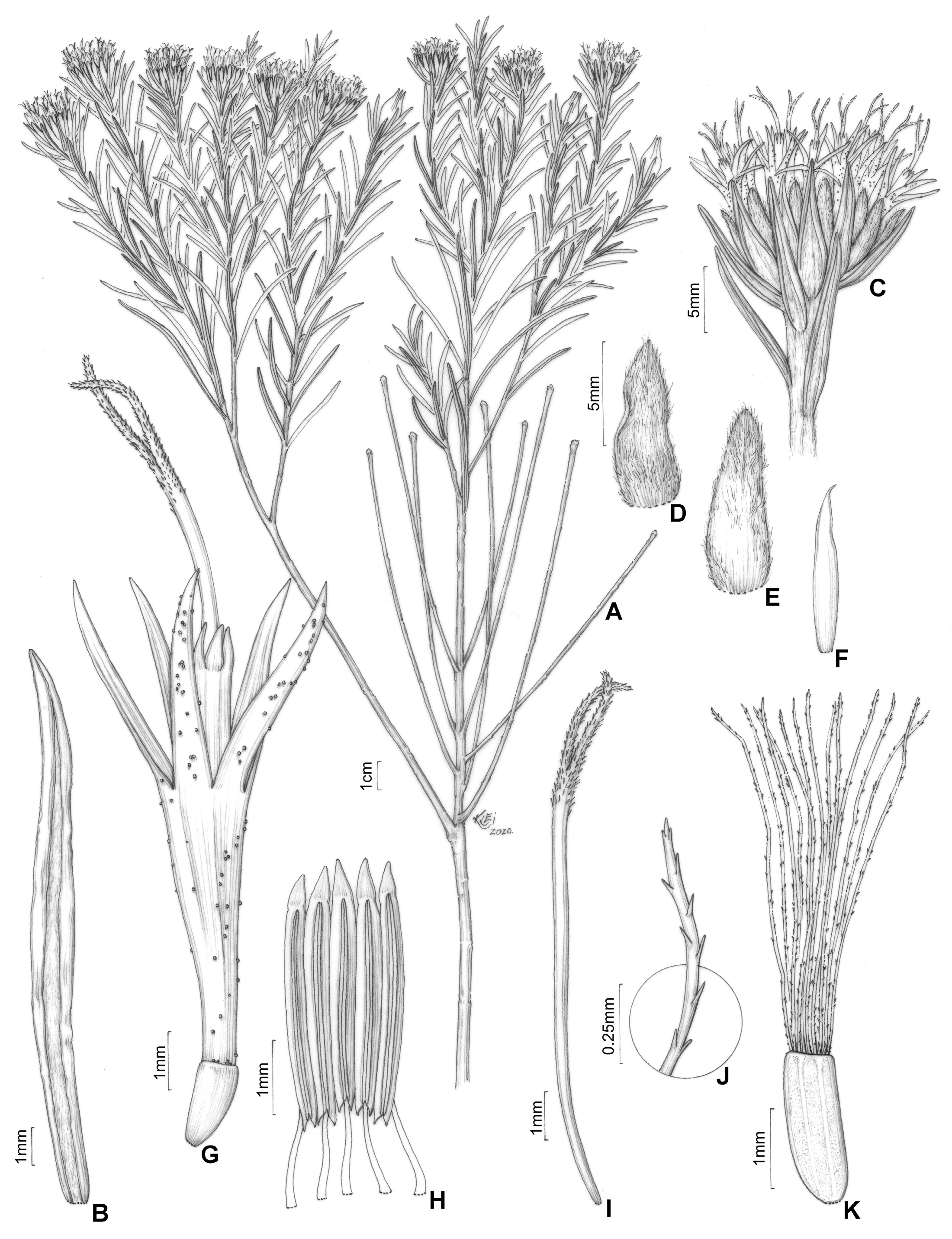