Description. Body depth at dorsal-fin origin 0.22–0.25 of SL and equal to, or slightly greater than, body width at cleithrum. Body depth at anal-fin origin 0.25–0.27 of SL and nearly equal to HL. Body compressed, with width at anal-fin origin approximately 0.48–0.51 of body depth at that point. Ventral surface of coracoids not exposed on ventral surface of body (see Fig. 1c View Fig ). Lateral line complete and midlateral. Canal having irregular zigzag pattern, with oblique posteriorly-directed branches off main canal. Lateral line canal extending short distance onto, and directed posteriorly or obliquelyposterodorsally on, caudal-fin base.

Anal-fin base approximately 0.22–0.24 of SL and slightly shorter than HL. Anal-fin origin located distinctly posterior of middle of SL and slightly posterior of middle of TL. Analfin margin straight, with first ray longest and subsequent rays becoming progressively shorter, but with anterior rays in mature males extending slightly beyond margin of rest of fin. Last anal-fin ray without membranous attachment to caudal peduncle. Anal-fin rays typically iii,18 to iii,23 (iii, 25 in one of 87 specimens; Table 1).

Pigmentation pattern in alcohol. Overall ground coloration ranging from light to dark brown, with overall ground coloration darker on dorsal portion of head and body and in some individuals on midlateral portion of body posterior of head in region overlying swimbladder. Abdomen unpigmented. Snout and upper lip darkly pigmented to some degree in all specimens. Lower lip with curved patch of dark coloration along margin in more darkly pigmented individuals.

Sexual dimorphism. Although a number of mature males of 126 to 140 mm SL (as indicated by the possession of an elongated urogenital tube adhering to the anterior margin of the anal fin) were examined, none demonstrated an elongation of the dorsal-fin spine beyond the condition present in females of comparable sizes. It is uncertain whether this observation reflects the absence of sexual dimorphism in the species or the lack of nuptial males in the available samples. Serrae on the posterior surface of the distal one-half of the dorsal-fin spine are proportionally longer in mature males than they are in juveniles and females.

Biology. Merona et al. (2001: 389) report that Auchenipterichthys longinmanus (sic) in the lower portions of the Tocantins River, feeds primarily on terrestrial invertebrates (81.88 % of diet) and also decapods (10.94%) and aquatic invertebrates (7.19%).

Remarks. The catalog number for the syntype series of Auchenipterus longimanus, BMNH 1849.11.8.11, was misreported in Eschmeyer (1998: 931) as BMNH 1849.121.8.? and BMNH 1849.11.8.?, and in Ferraris (2003: 472) as BMNH 1849.121.8.11. The original description indicated that the description was based on “fine specimens”; however the BMNH register provides no further information as to the number of specimens actually examined by Günther. Three specimens are currently found in the syntype lot (BMNH 1849.11.8.11). Eschmeyer (1998: 981) cited a specimen from ZMB as a syntype of this species, without comment except that the specimen was from BMNH. We have not investigated further to see if there is justification for labeling the ZMB specimen as part of the type series.

Fig. 5. Map of central and northern South America showing distribution of Auchenipterichthys coracoideus (1 = holotype locality; some symbols represent more than one locality or lot of specimens). 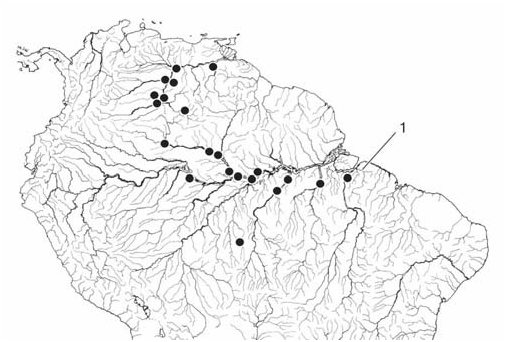 Fig. 7. Map of central and northern South America showing distribution of Auchenipterichthys longimanus (1 = holotype locality; some symbols represent more than one locality or lot of specimens).

Fig. 7. Map of central and northern South America showing distribution of Auchenipterichthys longimanus (1 = holotype locality; some symbols represent more than one locality or lot of specimens).