Head: Comparatively large, in males HWmax/PWmax 0.71–0.77 (m = 0.75), HWmin/PWmax 0.63–0.68 (m = 0.66); in female these indices respectively 0.77 and 0.66. Eyes with large facets, slightly convex, in males HWmax/HWmin 1.13–1.16 (m = 1.14) and in female 1.17, separated from buccal fissure at distance of slightly less than width of antennomere 1. Tempora absent or short, at most about one-fifths as long as eye, flat and oblique. Frons and vertex convex. Fronto-clypeal suture distinct, impressed, as deep as frontal furrows. Supraorbital setigerous pore located at or just behind level of posterior margin of eye, removed from supraorbital furrow at a distance of length of antennomere 2. Labrum almost straight anteriorly. Clypeus with slightly prominent apical angles and with more or less straight apical margin between them. Mentum and submentum fused, submentum with one long seta on each side. Mandibles medium-sized; left mandible evenly bent in apical portion, with acute apex. Dorsal microsculpture in both sexes present throughout, consisting of more or less isodiametric meshes, very distinct on clypeus and areas behind eyes and much finer on frons and vertex. Antennae comparatively long, in both sexes slightly surpassing basal edge of pronotum, with antennomeres 7–9 slightly longer than wide; in female antennae slightly shorter than in male, with shorter antennomeres.

Comparison. This species is similar in size and habitus to K. angustatus sp. n., K. similis sp. n. and K. pusillus sp. n., but markedly differs from them and all other species of Kenyacus known from the Rwenzori Mountains in having pronotal sides in basal half rounded or almost straight, not sinuate ( Figs 83, 85 View FIGURES 83–85 ), elytral striae extremely thin, very superficial, in basal half partly indistinct, and median lobe of aedeagus slenderer, with apex slightly curved in dorsal direction ( Figs 88 View FIGURES 86–90 ). The examined specimens of K. ruwenzoricus are also distinguished from other congeners by the presence of only one seta on each side of the submentum. Stability in this character should be checked on additional material.

Remarks. Kenyacus ruwenzoricus was originally described from five specimens collected in the northern part of the Rwenzori Mountains and no additional specimens were found more recently. In the original description, median lobe of this species is illustrated as being with apex straight, not bent at tip in lateral view. Examination of the aedeagus of the holotype only extracted by Pierre Basilewsky revealed that its apex was broken at tip. 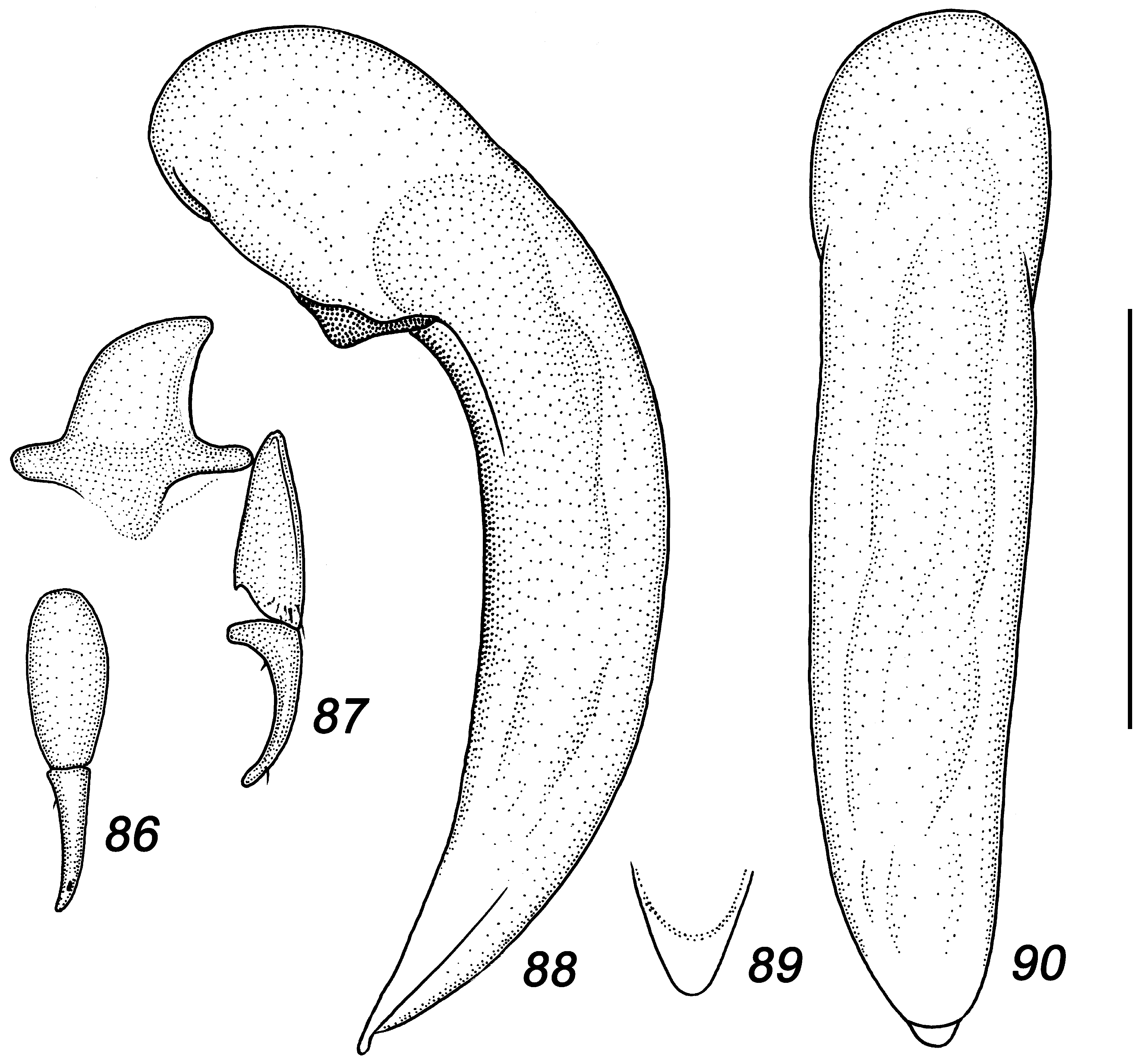