Etymology. The species epithet is derived from a combination of the Latin spinosus for spiny and domus for home, in reference to the species’ reliance on Triodia   grass hummocks.

Diagnosis. Ctenophorus spinodomus   sp. nov. is diagnosed from all other species in the genus, except for the taxa currently contained within C. maculatus   and C. fordi   , in having a near continuous row of femoral pores either side (15–22) in adult males arranged in a row that arches forward to an apex on the midline, and a dark chest patch (although obscure) between the forelimbs in adult males. Adult female C. spinodomus   sp. nov. can be distinguished from other regionally sympatric ( C. pictus   ) or parapatric ( C. nuchalis   ) species of Ctenophorus   by the presence (vs absence) of a fine, typically uninterrupted pale dorsolateral stripe down the body from the neck to just past the hindlimbs.

Adult male C. spinodomus   sp. nov. are diagnosed from all named subspecies of Ctenophorus maculatus   in having fewer femoral pores in total (maximum 41 vs range of 40–57 encompassed by the maculatus   subspecies—Storr, 1965), and in the dark markings on the throat being present as a series of dark spots and blotches either side of the midline of varying intensity and degree of coalescence vs a pattern of well-defined narrow to broad dark bars either side.

The following features of colouration and scalation in combination distinguish Ctenophorus spinodomus   sp. nov. from taxa assignable to the other genetic lineages under C. fordi   (see Tables 2 and 3): tail length c. 2.1–2.4 times the body length in males and c. 1.95–2.15 times in females: hindlimb length c. 82–93% SVL in males, c. 74–93% in females; upper labial scales 10–13; subdigital lamellae scales 25–31; femoral pore scales in males 16–22 either side; dark markings of the throat of adult males typically obscure and present as scattered spots and blotches, occasionally aligned either side of the midline but not coalescing to form elongate blotches; chest of adult males with a typically poorly-defined black “T” shaped patch.

Adult male C. spinodomus   sp. nov. have a black “T” shaped chest patch which is typically poorly defined. The black chest markings of aff. Group 1 and taxa assignable to the other genetic lineages under C. fordi   are typically bold in expression and differ markedly in shape.

Description. The species is described from 17 adult males and 15 adult females regarded as representative of populations in central-west and southwest New South Wales, and southeast South Australia.

Colour and pattern: adult males ( Figs 5 View Figure 5 A–D, 6A, 7A)— dorsal surface in life orange-brown and defined from the lateral surface by a narrow (2 sometimes 3 scales width), pale, dorsolateral stripe with a dark edge that extends from the nape to base of the tail ending abruptly just past the hindlimbs. Dorsal surface of the body with a series of small dark blotches adjacent to and contacting the pale dorsolateral stripe and a scattering of very fine dark flecks on the top of head and body, the extent of spotting (particularly on the head) varying from sparse to moderately dense between individuals at a location. Intrapopulation variation in definition of pattern on the lateral surface is present. Upperlateral surface with a base colour similar (orange-brown) or marginally darker (mid brown) in tone to the dorsal surface, and dominated by a series of large dark markings (blackish blotches) of varying intensity and definition between the fore and hindlimbs, usually concordant in placement with the position of opposing small dark blotches on the dorsal surface of the body. Mid-lateral surface with a variably defined pale midlateral stripe along the side of the body between the fore and hindlimbs, distinct and defined by the dark markings (blotches) of the upper-lateral surface and a line of fine dark scattered spots along the upper and lower edges of the pale stripe, less well-defined in other individuals where the line of dark makings along the upper and lower edges of this stripe are not continuous and present only as scattered flecks. Lower surface with similar colouration to upper-lateral surface, but with the base colour tending to border the lower edge of the pale midlateral stripe and the darker markings the lateroventral margin. Tail similar in colour above to the dorsal surface of the body. The pale dorsolateral stripe of the body continues a third or less of the way along the tail as a series of faint pale spots scattered along the dorsolateral edge. Side of tail uppermost dark (an extension of the dark upper lateral markings of the body) and tending to form a distinct stripe, which in turn is bordered below by a pale stripe (an extension of the pale midlateral stripe of the body) for approximately the basal third of the tail, which in turn is defined for most of its length from the underside of the tail by a series of fine dark markings along the ventrolateral margin, usually continuous along most of its length and forming a fine dark stripe.

Ventral surface pale, white in life, with dark scattered markings on the throat and chest. Dark throat markings variable in distribution and intensity, sometimes sparse and scattered but also tending to align either side of the midline, and only rarely forming narrow and elongate blotches which approach each other towards the chin. Dark chest markings also variable in distribution and intensity, sometimes presents as a few blotches medially between the forelimbs through to being aligned to form a poorly defined “T”-shaped patch with the lateral extensions typically narrow but the rearward extension varying from narrow to occasionally broad. Most individuals with a narrow alignment of dark markings along the anterior ventrolateral edge of the forelimbs, sometimes present as a continuous stripe at least on the humerus.

Adult females ( Figs 5 View Figure 5 E–F, 6B, 7B)—dorsal and lateral surface with a similar pattern to males but overall lighter in tone. Ventral surface with the dark throat markings present as greyish specks and smudges, and chest typically without areas of dark markings.

Variation. No significant difference in scalation or body proportions were detected between populations from centralwest NSW and those from southwest NSW, or with those from southeast SA west of the Murray River.

Distribution and biology. Ctenophorus spinodomus   sp. nov. occurs on the red sandplains belonging to the Mallee dunefields (as identified by Hesse, 2010) of central-west and southwest NSW and adjacent areas of inland southeast SA that lie to the north and west of the main Murray River channel, within the IBRA bioregions of the Murray-Darling Depression (with the exception of the Darling Depression subregion) and Cobar Peneplain bioregions. Here, the distribution of populations in central-west and southwest NSW is dependent on the presence of Triodia   hummock grass which grows as a groundcover in association with mallee woodlands ( Cogger, 1974; Sadlier & Shea, 1989), termed Triodia Mallee habitat   ( Fig. 8 View Figure 8 ). Extensive information on the species biology has been published by Cogger (1974, 1978) based on population studies undertaken at Round Hill Nature Reserve in centralwest NSW. We present here a summary of points relevant to its reliance upon this habitat type and vulnerability to decline. The population referred to as C. aff. spinodomus   occurs in adjacent areas of northwest Victoria to the south and east of

the major “Groups”. the main Murray River channel within the Mallee dunefields, and the extent of reliance of these populations on Triodia Mallee habitat   has yet to be established.

Ctenophorus spinodomus   sp. nov. has an essentially annual life cycle, with some individuals extending into a second, rarely a third, season. Marked mortality of adults begins in late December and extends into January, with a loss of up to 85% of the population. Densities approaching 125 individuals per hectare have been found in areas regenerated 5–10 years after fire, but climax mallee communities with well-developed Triodia   have lower densities. Males have a larger home range (mean 0.032 ha) than females (mean 0.015 ha), with juveniles a smaller range (0.007 ha) than adults, but with little shift in home range and negligible migration, and no territorial behaviour has been recorded ( Cogger, 1978).

The species diel cycle revolves around utilization of Triodia   clumps at various times of the day. During the night individuals shelter within Triodia   and undergo preemergence basking amongst the spines of the clump to attain a body temperature sufficient for activity. On emergence individuals have not been observed active more than a few metres from the nearest clump of Triodia   . During the hottest part of the day most lizards retire within the clumps of Triodia   where summer humidity levels are higher than ambient and temperature during the hottest part of the day markedly lower than ambient and more so than substrate. However, during the winter period few individuals were found residing inactive within Triodia   , rather, opportunistic observations suggest they dig into soil and shelter underground, but not in specially constructed burrows. It feeds almost exclusively on small ants but will take other insects opportunistically.

The earliest recorded egg-laying in Round Hill was mid- October and the latest in late January, with a peak period for egg deposition around mid-November. Development of a clutch of eggs takes less than 8 weeks. Females deposit 2– 3 eggs in a chamber that is constructed and sealed on the same day after laying. No female was recorded laying more than two clutches in a season, but given the clutch development period and length of laying season three clutches could be achieved. On average only 20% of hatchlings survive to reproductive age in the Round Hill population.

Comments. Wells & Wellington described Phthanodon hawkeswoodi   sp. nov. in 1985. The designated holotype is a specimen (AMS R.116983) from Glenlea central fire trail Yathong Nature Reserve, NSW (collector A. B. Rose and J. Brickhill, 14 March 1981). The diagnosis presented by Wells & Wellington amounts to an extended description of the holotype that failed to provide either a “… definition that states in words characters that are purported to differentiate the taxon” or a “… bibliographic reference to such a published statement… ”, as required under Article 13(a)(i–ii) of the Third edition of the Code of Zoological Nomenclature applicable at that time. As such, the description of Phthanodon hawkeswoodi Wells & Wellington, 1985   is unavailable for application to the species described here as C. spinodomus   sp. nov.

Houston (1978) identified three distinct races of what was then considered Amphibolurus fordi in SA. One   of these, his “eastern” race, was mapped as being from far southeast

Edwards et al. (2015) figured the distribution of populations from northwest Victoria and far southeast SA (their C. fordi   clade 5) as extending west across the Murray River and bisecting the Group 1 populations in southeast SA and southwest NSW. Reference to the online supplementary data for this publication gives one specimen (listed as 40887) with the coordinates “-34.05 139.1833”, which would place it west of the Murray River. Presumably this is the South Australian Museum specimen R40887 View Materials which is listed in the museum database as from Morgan Conservation Park, and with those same coordinates. However, Morgan Conservation Park lies 50 km to the east of these coordinates and on the south and east side of the Murray River. On the assumption the coordinates used to map this specimen are in error, all populations identified by Edwards et al. as belonging to their C. fordi   clade 5 genetic lineage actually lie entirely to the south and east of the main Murray River channel, and the distribution of this lineage is parapatric to (not bisecting) the C. spinodomus   sp. nov. populations in southeast SA and southwest NSW—a result consistent with our morphological investigations. 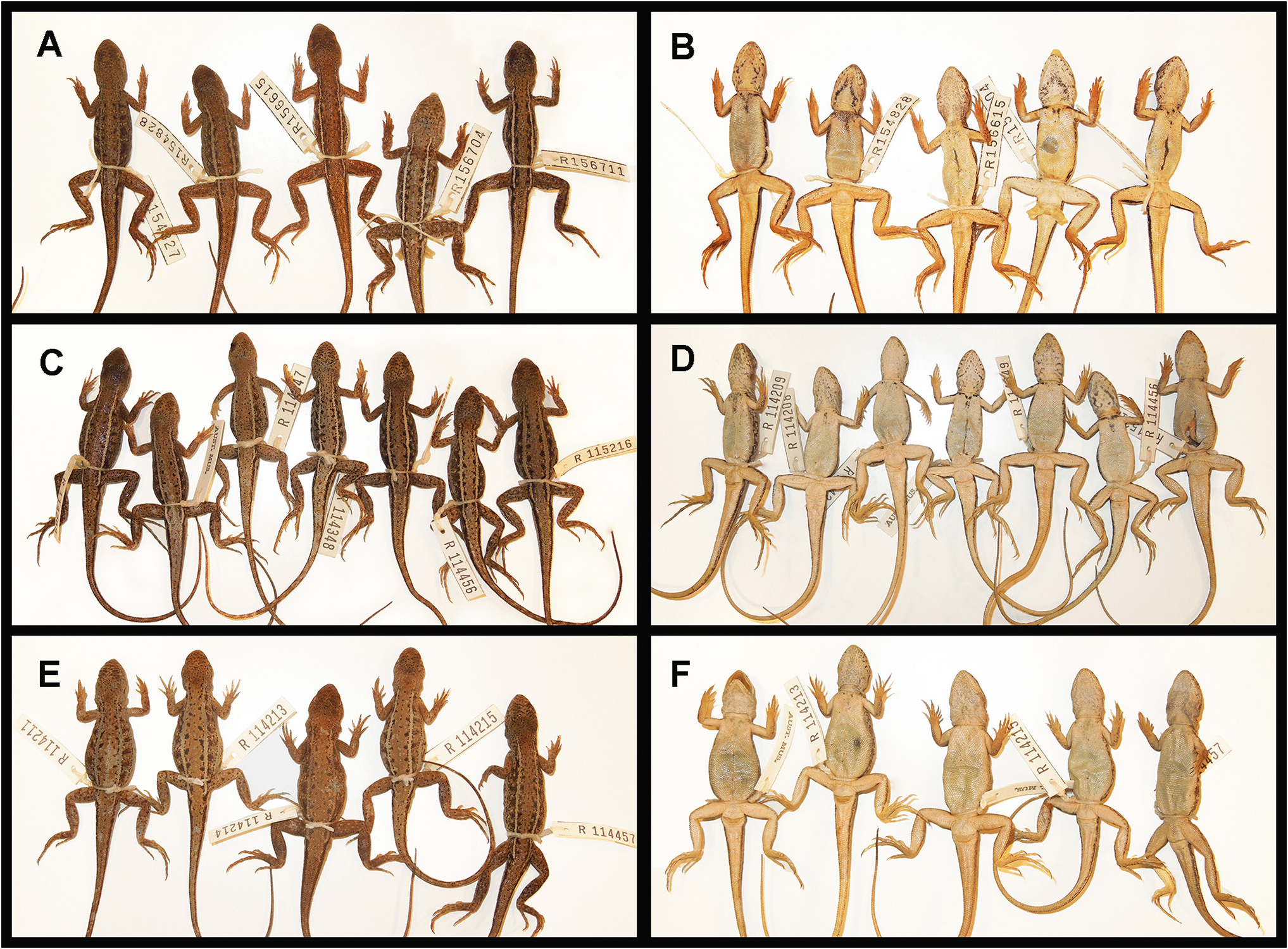 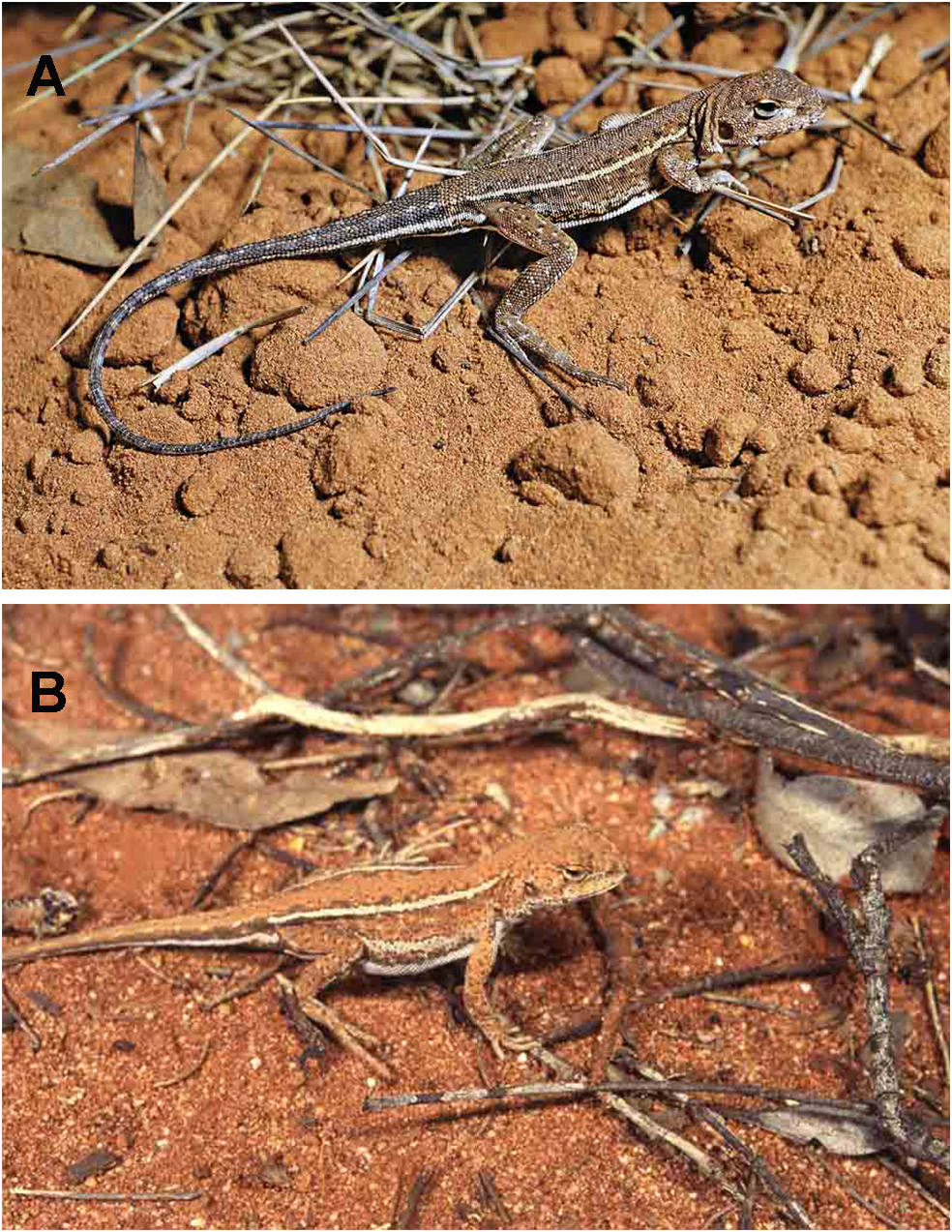 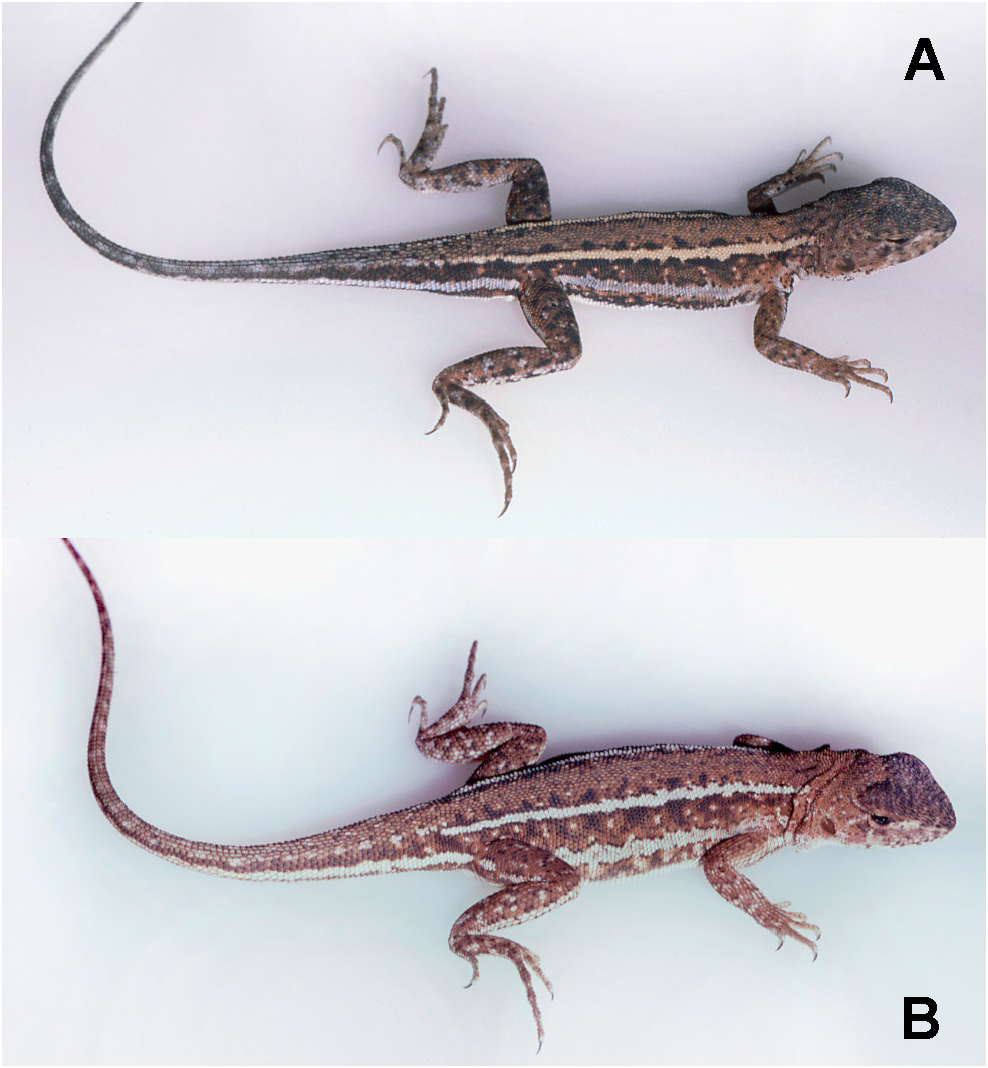 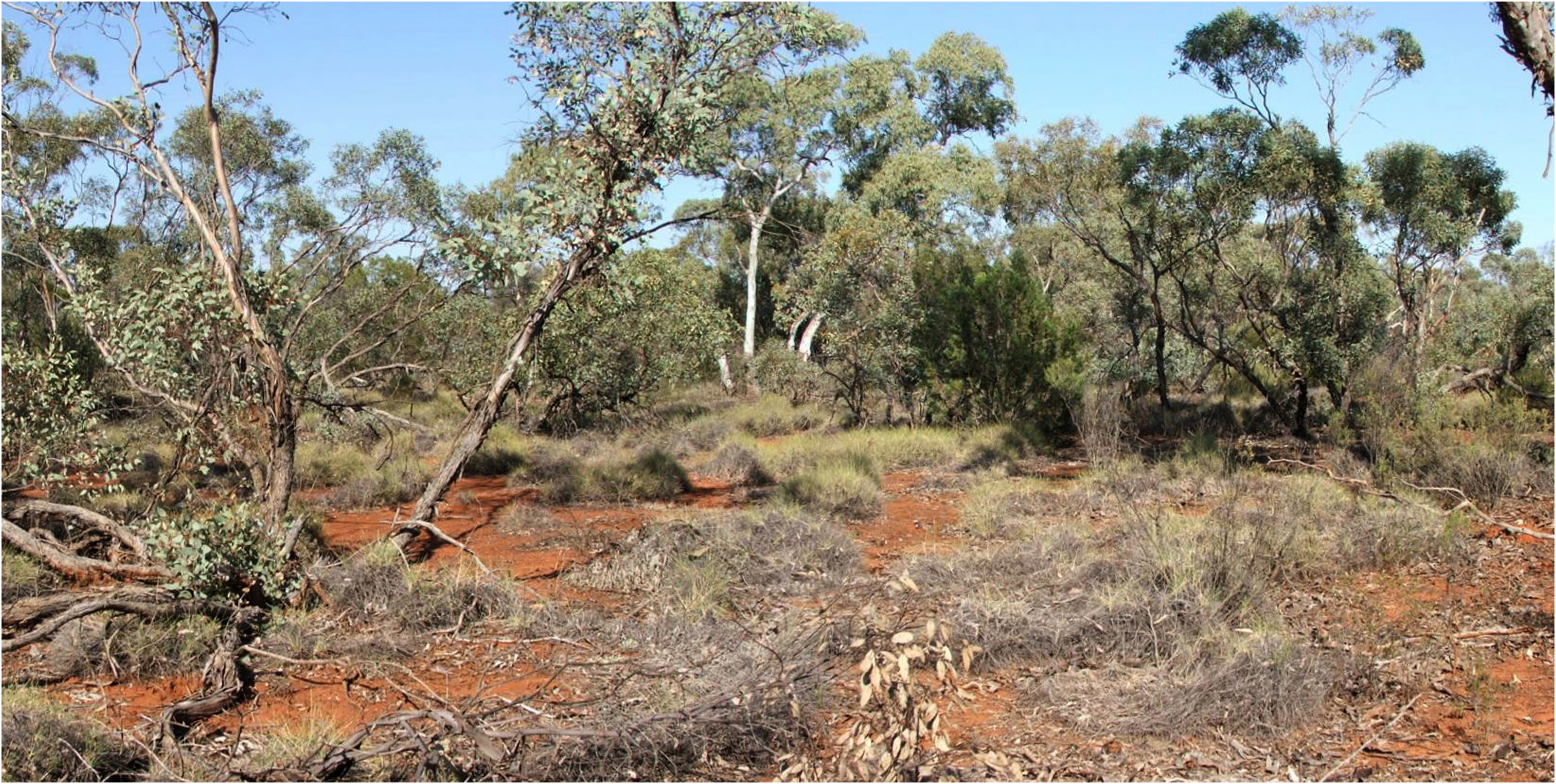