DISTRIBUTION. — From the Galápagos Islands to the Tumbes Peninsula (Talcahuano,Concepción), Chile. Fauchald (1972: 414) erroneously listed Tumbes, Peru, as the type locality.

There are several features that show certain sizedependency, especially the number of chaetae per bundle and the number of anterior segments with dorsal tubercles. The variation is limited, however, and under a certain range of variation, they can be employed to separate similar species having a relatively similar size. On the other hand, the start of neurohooks is consistent.

Trophoniella grandis   n. comb. was described as Siphostoma grande   in a major work on Chilean natural history involving several French scientists. However, Quatrefages (1866) did not acknowledge this; in fact, he had already employed the “Nob.” abbreviation before ( Quatrefages 1849). This comes from the Latin word “nobis”, meaning “to us” and it is equivalent to “mihi”, which means, in turn, “to me […] and used after a name to indicate the author’s responsibility for it” ( Stearn 1992). Thus, he introduced new names even when he was aware that a previous name had already been used for the same species (cf. Quatrefages 1866: 476 under Chloraema dubium   as a new name, instead of Flabelligera   (olim Siphostoma   ) diplochaitus Otto, 1821). Therefore, because both names have been introduced for Chilean flabelligerids,in both cases the same epithet was employed, and because collecting trips to Chile was not frequent, both names must have the same type specimen, consequently become objective synonyms, and Blanchard’s name has priority. It must be stated that Quatrefages noticed the apparent lack of notochaetae in several anterior chaetigers, and this would explain why he moved the species to Lophiocephala   Costa, which is a junior synonym of Stylarioides (Salazar-Vallejo 2011b)   . The specimen was distorted during preservation; most of the tunic was detached from the body wall, and especially in anterior chaetigers, chaetae can be seen by transparency under the loose tunic, or the aligned chaetal scars can be seen in the corresponding sites. Trophoniella grandis   n. comb. resembles T. ehlersi   n. comb. because their tunics include fine sediment particles over the dorsal and ventral surfaces. They differ because in T. grandis   n. comb. there are dorsal tubercles in the first few chaetigers, whereas in T. ehlersi   n. comb. the anterior chaetigers do not have dorsal tubercles or notopodial lobes, and because in T. grandis   n. comb. the falcate neurohooks start by chaetiger 7 whereas they start by chaetiger 5 in T. ehlersi   n. comb. 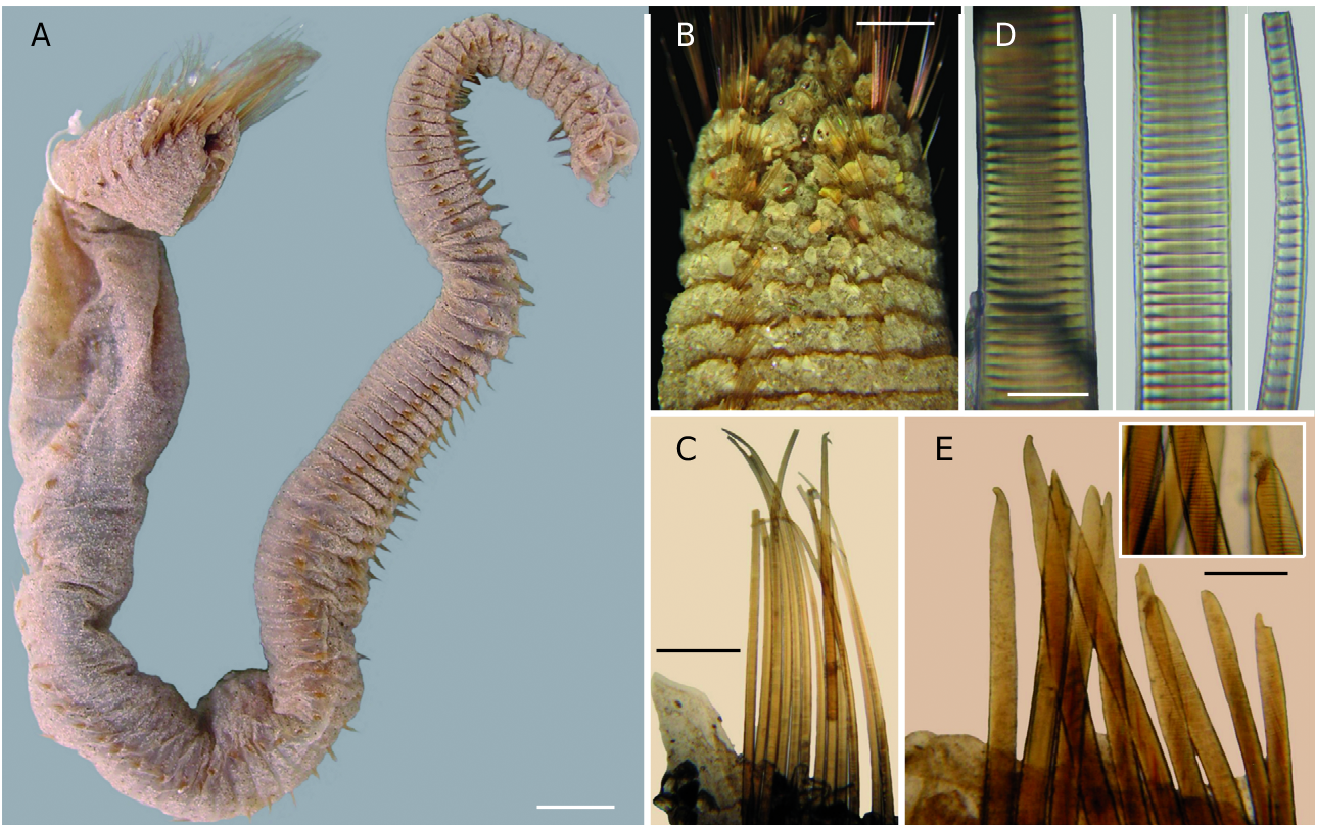