Staining pattern: The first three pairs of lateral lappets stain deeply, without any difference between their edges and bases. ( Figs 13M,N View FIGURE 13 ). Ventral shields stain from segments 2–17; the first 4 shields stain completely, and rest only in a central square. Dorsally, the notopodial glandular tissue stains deeply from dorsal lobes on segment 4, near to first pair of notopodia, up to end of thorax. Only the branchial stalks stain. Nephridial papillae do not stain.

Variation: The poor condition of the type specimen obscures some important characters; nevertheless, they are complemented with additional specimens examined. Some variation in the thoracic length and width was found among the additional specimens examined. Thorax is 13–22mm long, and 1.8–3.5mm wide, according to the information when collected. All specimens have a dark cavity in the center of the internal side of the third lateral lappet ( Figs 13 View FIGURE 13 E-G); this cavity is open dorsally and is not easy to see, especially in poorly relaxed specimens or in poor condition, as is the case of the type specimen where this feature is hidden but present. This feature is not present in any other species of Pista   reported here or anywhere, and may represent a useful character to distinguish species. Additional specimens also have short ventral lappets on segments 5 and 6, folded anteriorly, and connecting ventral shields with the tori; these ventral lappets are not seen in the type specimen because of its state of preservation. Some specimens have ventral shields from segment 2, along 15 segments; however, one specimen from Tobago has 17 ventral shields. The type specimen does not have complete branchiae; in other specimens they are heterogeneous in length, with one branchia of a pair longer than the other. The only variation presented in the color of the specimens appears in one specimen from Curaçao; its third pair of lateral lappets is light brown where the internal cavity is present, and its dorsal lobes in segment 4 are brownish. Finally, a variation in the uncinal formula, MF:2:3–4:2:1, is present   .

Discussion: This species was described as Terebella cetrata   by Ehlers (1887) mainly because of the two pairs of branchiae and the shape of the uncini MF:2:3. However, Hessle (1917) mentioned that it could belong to Pista   , but without any further comment. Hartman (1938) followed Hessle, but later on she changed her view ( Hartman, 1959), considering this species better placed in Nicolea   , presumably because of the characteristic uncinal shape of this genus, and the absence of capillary chaetae with serrated tips (common in Terebella   ). Nevertheless, after the revision of the type specimen in the MCZ, I have confirmed that the species belongs to Pista   , as Hessle had indicated, because of the presence of well-developed lateral lappets on segments 1–4, pairs of nephridial papillae only in segments 6–7, and the presence of uncini with long posterior process from the first unciniger, which are distinctive features of Pista   . Further, after revision of the uncini, I noticed that Ehlers’ drawings were confused because the uncini in his plate 52, numbered as 8a-b, actually belong to P. cetrata   (as Terebella cetrata   ), and not to Terebella reticulata   as said in the legend; likewise, the uncini numbered as 14a-b, also belong to the latter species.

Pista cetrata ( Ehlers, 1887)   comb. nov., differs from the other species described from the Grand Caribbean   region in the shape of the dorsal edge of segment 4, by the presence of uncini with a long posterior process on the first 6 pairs of neuropodia, and by having a particular staining pattern. On the other hand, this species is similar to Pista quadrilobata ( Augener, 1918)   from Southern Africa, but recorded by Day (1973) from North Carolina, and by Kritzler (1984) from the Northern Gulf of Mexico, with regards to the shape of the uncini from the first pair of neuropodia. Day (1973) drew an uncinus with a long occipitium (neck), without sub-rostral process, and with a long posterior process (shaft) from specimens collected in North Carolina. Nevertheless, he mentioned that they were present only on first and second tori. Pista cetrata   has this kind of uncini on the first 6 pairs of neuropodia. Other differences between these two species are the presence of eyespots, and the absence of dorsal lobes in segment 4, which are present in P. quadrilobata   . The specimen reported by Kritzler (1984) as P. quadrilobata   differs from P. cetrata   in that the former was described as having eyespots, 18 pairs of notopodia, and uncini with a long occipitium and a posterior process only on the first three uncinigers. Kritzler’s drawings do not show the dorsal lobes in segment 4. Thus, P. cetrata   differs from other Pista species   originally described or reported from the Grand Caribbean   region by having an internal blind cavity in the third pair of lateral lappets, short and swollen dorsal lobes on segment 4, by lacking eyespots, and by having uncini only from the first six uncinigers with long Oc, a long PP and PF, and a particular staining pattern.

One specimen from Guadeloupe had three Haplosyllides   ( Syllidae   ), possible H. floridana   , attached laterally to the abdomen, by a thin filament coming from the pharynx, and joining the mouth of the syllid with the interior of the terebellid, in regions where the latter is damaged. According to Martin and Britayev (1998), this genus has been found in symbiosis with ophiuroids, sponges, and cnidarians. They report another 10 genera and 20 species of symbiotic syllids, although no other syllid was found in a symbiotic relationship with any other terebellid examined during this study 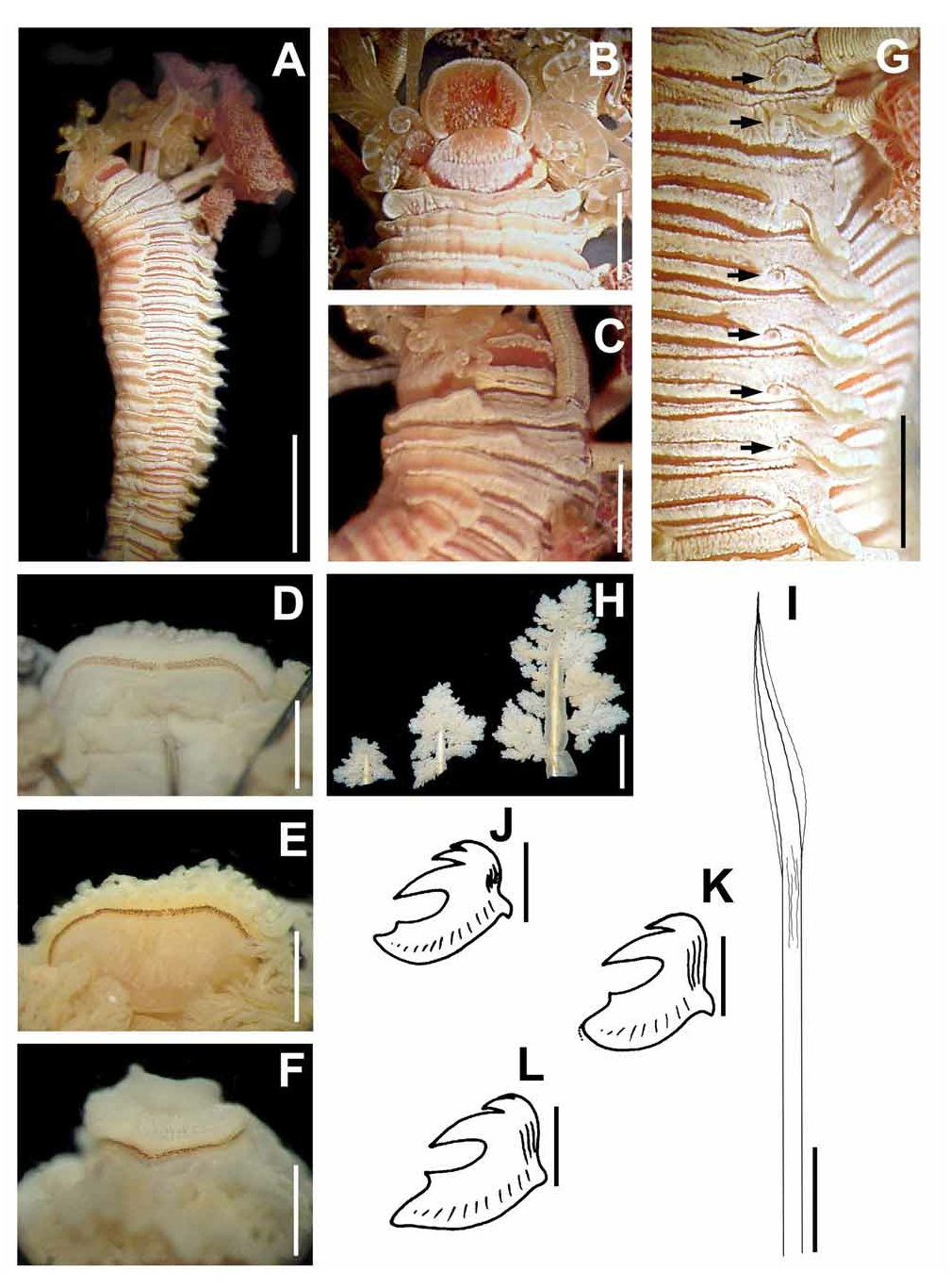 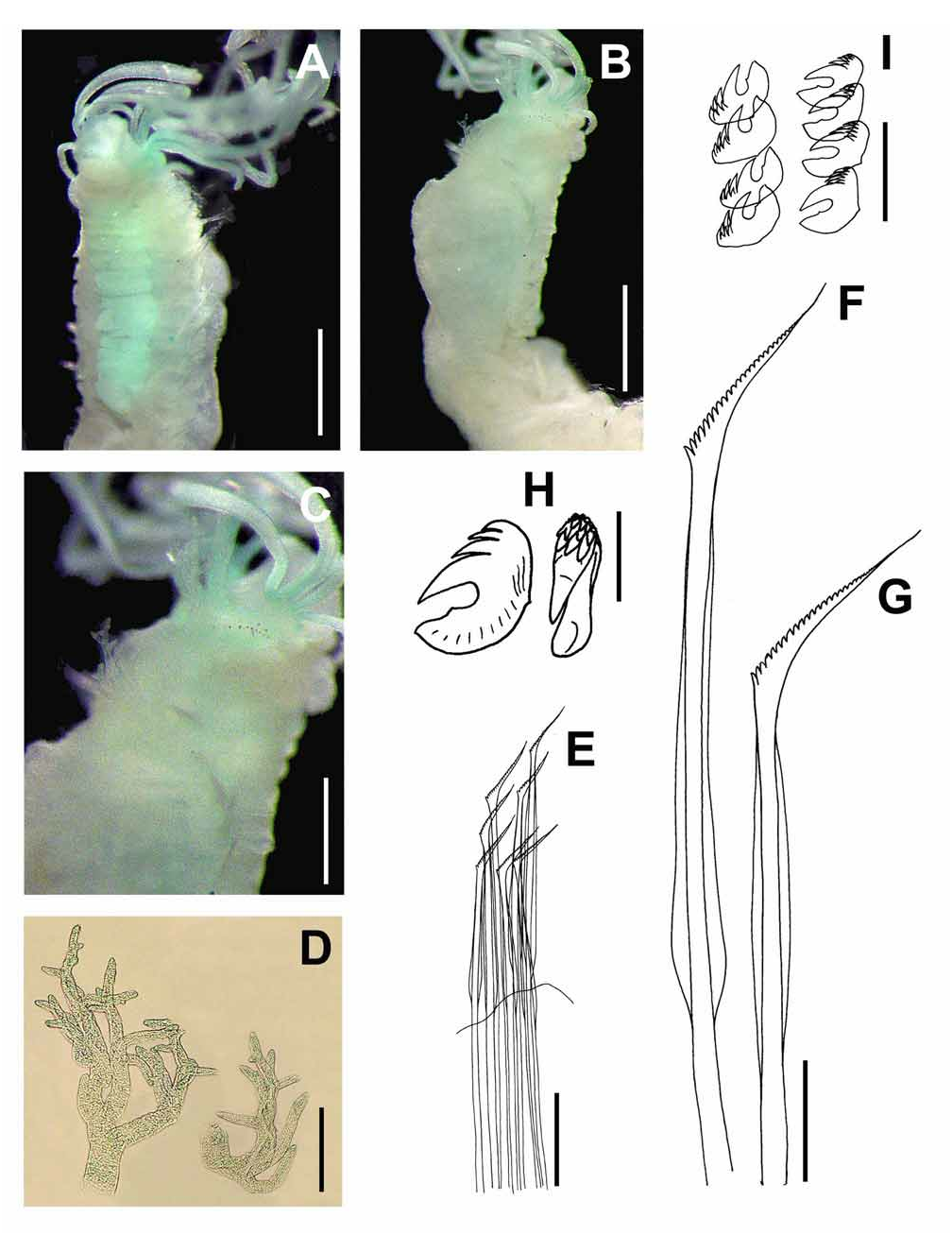 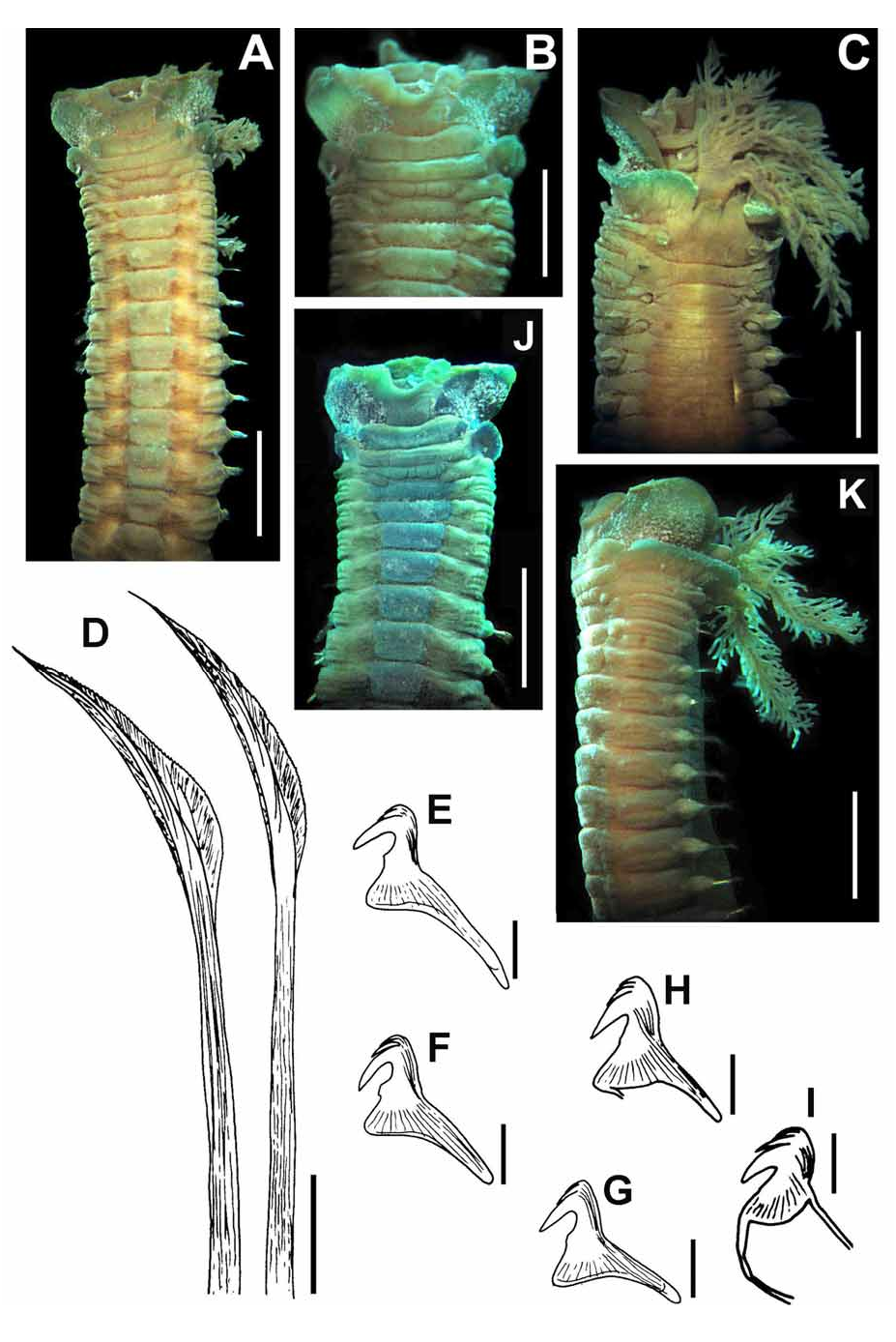