Until 2005, the Upemba Lechwe was treated as a taxonomically indistinct subpopulation of K. leche , but it has recently been elevated to species status. Monotypic.

Descriptive notes. No confirmed measurements are available. The Upemba Lechwe is a relatively small lechwe based on museum skull and skin specimens; live animals have not been well studied. In general form, this species is lightly built and most resembles the Black Lechwe (K. smithemani). The pelage of both sexes is bright reddish-brown; the flanks and neck are paler. The underparts are white, and a white stripe 1s present on the underside of the neck, which generally terminates before reaching the upper third of the neck. The forelegs have a thin blackish-brown stripe on their anterior surface; the lower hindlegs are dark. The long tail is sparsely furred with reddish hair exceptfor the bushy terminal tuft, which is black. The forehead and bridge of the nose are darker and more richly colored than the rest of the pale reddish-brown face. Circles of white hair surround the eyes and ears; the lips and chin are also white. The backs of the ears are light brown; the front and back edges, as well as the interior, are white. In some specimens,the tips of the ears are dark. The relatively slender horns are borne only by males. Strong annulations are found along most of the horn length. As the horns emerge from the skull, they diverge outward and curve backward before becoming approximately parallel and bending upward at the tips. Horn length averages 54-6 cm (15 specimens, range 41-66. 7 cm), and the tip-to-tip interval averages 31-5 cm (19.4-47. 4 cm in the same 15 specimens). Dental formula is 10/3, C0/1,P 3/3, M3/3 (x2) = 32.

Food and Feeding. There is no specific information available for this species, but other Kobus species are grazers.

Breeding. There is no specific information available for this species, but presumably similar to the closely related Black Lechwe.

Activity patterns. There is no specific information available for this species, but probably like the Black Lechwe.

Movements, Home range and Social organization. Seasonal movements follow the rise and fall of annual floods, so shallow-water habitats are occupied year-round. Other habits are unknown, but are presumed to be like the Black Lechwe.

Status and Conservation. CITES Appendix II (included within K. leche ). Classified as Critically Endangered on The IUCN Red List (as K. leche anselli ). The Upemba Lechwe was formerly found throughout the Kamalondo depression between Lake Kabwe and Lake Kabamba along the northern border of Upemba National Park. The current distribution is significantly restricted. In the late 1970s, the Upemba population was estimated at approximately 20,000 individuals; current data suggest that fewer than 1000 survive. An isolated population of lechwe from Luapula south of Lake Mweru (tentatively assigned to K. leche but potentially related to K. anselli ) is believed to be extinct. Intense poaching for meat is believed to be responsible for the recent decline in population numbers. 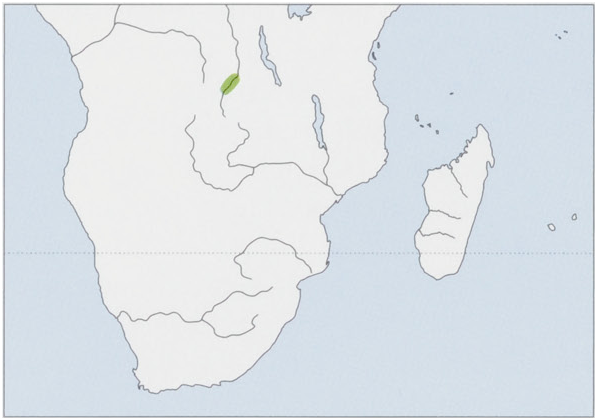