F. P. D. Cotterill, in his paper describing the Bangweulu Tsessebe ( D. superstes   ), found that the Zimbabwe and Okavango populations of D. lunatus   were somewhat different, though not consistently, and it may be that they should be distinguished as two different subspecies. Monotypic.

Descriptive notes. Total length 207-229 cm (males) and 190-226 cm (females), tail c. 45 cm, shoulder height 116-134 cm (males) and 108-132 cm (females), ear 18-21 cm (both sexes), hindfoot 51-57 cm (males) and 48-56 cm (females); weight 136— 158 kg. The horns are long and lyrate, with narrow pedicles; they curve evenly outward, then inward and slightly forward, and form a semi-lunate profile. They are ringed for almost their entire length, and are thicker at the base in males, although there is very little other difference. Horn length is 25.6-39. 1 cm,tip-to-tip distance is 18-4—41-5 cm, span of horns is 26-45 cm, greatest skull length is 36.5-42. 9 cm, and maxillary tooth row is 80-7-102-7 mm. In all cases, females average very slightly less than males. The overall color is medium or pale brown or tan, with a purplish sheen and a dark brown tone along the midline of the face; there is a dark, medium-gray patch from the lower part of the shoulders to the upper segments of the forelimbs, and on the thighs and upper segments of the hindlimbs. The tail is yellowish-white at the base, with a long blackish tuft; the ear backs, rump, inside of hindlegs, inside of upper segments of forelimbs, and abdomen are yellowish-white. Diploid chromosome number is 36 with the X chromosome submetacentric. An apparent hybrid between this species and the Red Hartebeest ( Alcelaphus caama   ) was shot in 1890 in the Tati Valley, in far north-eastern Botswana (near present-day Francistown, on the Zimbabwean border).

Habitat. Edaphic grasslands, especially on woodland edges and where there is surface water; during the dry season, Western Tsessebe tend to live on floodplains, but during the rainy season they move into open woodland.

Food and Feeding. Exclusively eat grass, especially up to 60 cm tall, but in the Mababe Depression, Botswana, they even eat three-meter-tall wild sorghum. They are selective of plant parts, favoring growing leaves. Stable isotope analysis of dental enamel confirms that the diet ofthis species consists entirely of grass.

Breeding. Seasonal breeders; rutis from January to March in South Africa’s Limpopo Province, December—]January in Kruger National Park, and March-April in northern Botswana. More than 90% of adult females give birth each year; the young run with their mothers from birth, and lie in slight depressions in the ground in groups of two to five while the mothers are feeding. One of the mothers usually stays close to them. Males become sexually mature at 40-42 months of age; females give birth for the first time at about 36 months.

Activity patterns. Western Tsessebe are very fast, and can keep up a heavy gallop for a considerable distance; they do not jump, but crawl under obstacles. Territorial males block movements of others by standing broadside, often with cavorting and emphatic nodding.

Movements, Home range and Social organization. The groupings of Western Tsessebe consist of territorial males, female—young herds, and bachelor groups. In north-east ern Botswana, the herds average 3-6 individuals, and the bachelor groups average eight; they may aggregate into larger groups on preferred feeding grounds. In the Mababe Depression, Botswana, an aggregation of 194 tsessebe was recorded. Male territories average 2—4 km ” in the Kruger National Park; the territories are patrolled regularly and marked with dung piles and foot and preorbital gland secretions. Territorial males kneel down to rub their preorbital glands along the ground or on termite mounds. Females also mark with their preorbital glands, and both sexes horn the soil. Territorial males perform “static-optical displays,” by standing on mounds, making themselves conspicuous for the benefit of other males and female herds and scanning for potential predators. They challenge trespassers by tossing their heads or bucking. Competing males wheel around each other, sometimes dropping to their knees and clashing horns or interlocking horns and pushing. Each female herd is permanently associated with a territorial male (in effect they are his harem), who herds them with his head raised, nose pointed forward, ears pinned back and pointing downward, goose-stepping. Young males are evicted from the territories as the rut approaches, and theyjoin bachelor groups.

Status and Conservation. Classified as Least Concern on The IUCN Red List (as D. lunatus lunatus   ). Western Tsessebe still occur in good numbers in the northern parts of their range and in Kruger National Park, but elsewhere in South Africa, Mozambique, and Swaziland, they became extinct by the early 20" century. They have now been widely reintroduced over much of their former range. 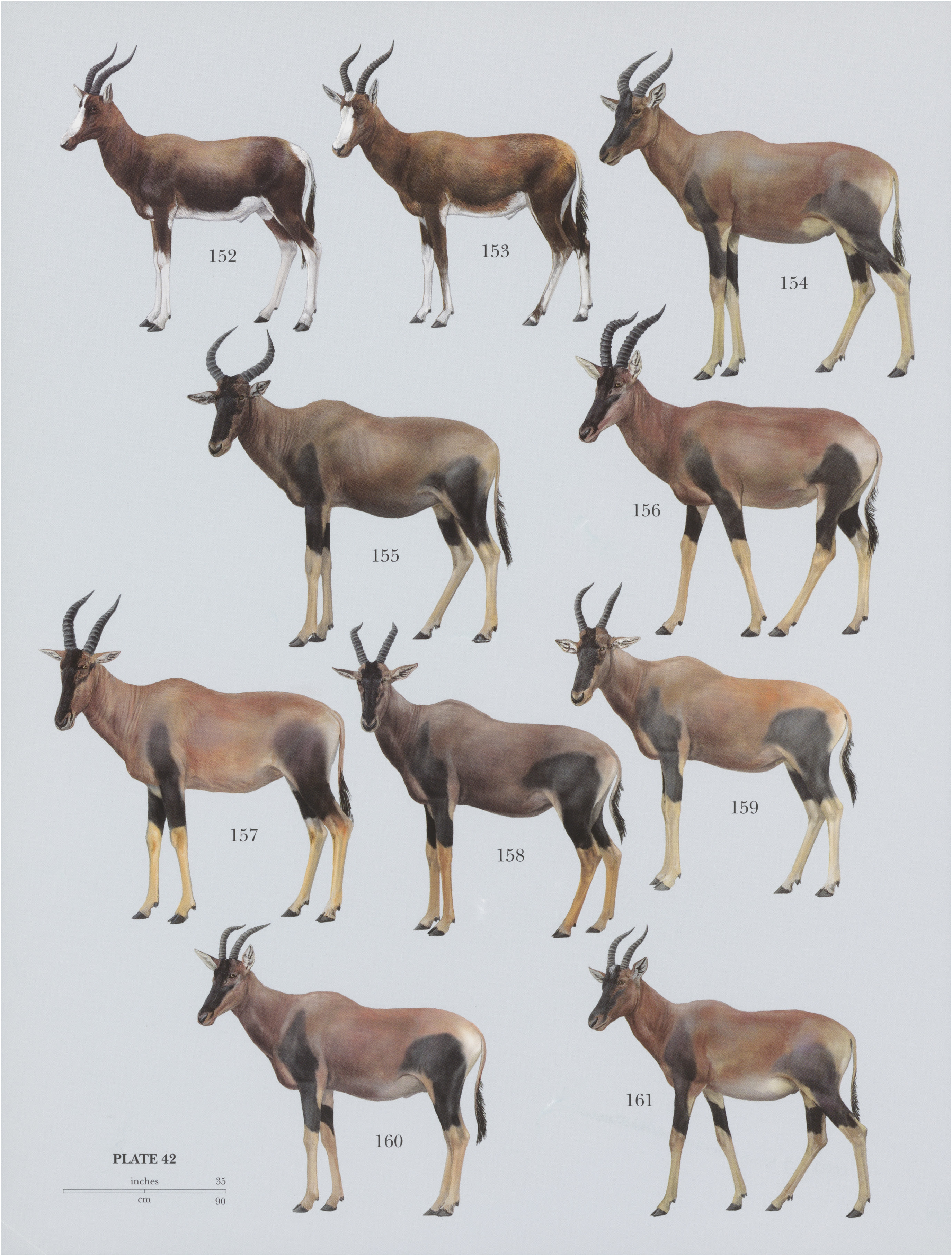 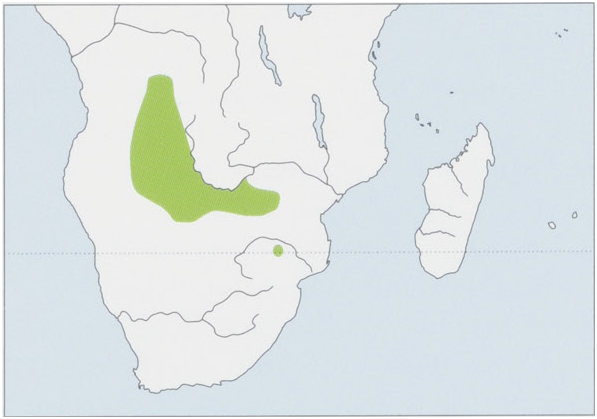