Pronotum twice as wide as long, widest behind middle, slightly wider than widest part of elytra; densely, coarsely punctate, punctures separated by less than half their own diameter; black setae long, erect; median longitudinal triangular depression extending from near midpoint to hind margin. Depressions lateral to midline shallow, subparallel to axis of body, extending forward, diverging slightly toward anterior. Color black, without yellow markings. Side margins at middle obtusely angulate, hind corners reflexed, not visible from above. Setae on anteriolateral margin sparse, shorter than at middle.

Venter black, shining, with erect white setae, most dense along lateral margins. Punctures fine, smaller than on elytra, separated by their own diameter.

Variation. Except for slight differences in size and shape of elytral markings, the eight specimens comprising the type series are remarkably similar. The paratypes range in size from 11.3 to 13 .0 mm long and 4.4 to 4.5 mm in width.

Etymology. This species is named for my wife, Jean, as a small token of my thanks and appreciation for the 40 years of support that she has provided to my many entomological endeavors.

Remarks. Acmaeodera jeanae most closely resembles A. scapularis Horn, 1894 ( Fig. 2 View FIGURES 1 – 3 ) from the cape of Baja California Sur, but can be separated from the latter by the characteristics provided in the comments below and those listed in Table 1 View TABLE 1 . In general terms, A. jeanae is more robust, less shiny, with the elytra more or less subparallel, with a large truncate yellow mark at middle of elytra not extending over middle costa. Acmaeodera scapularis is more slender, the dorsum distinctly shiny, elytral margins cuneate, tapering directly to the apex, without being rounded; middle yellow mark extending over costa toward suture. Acmaeodera scapularis is shinier, especially on the pronotum. The middle elytral markings in A. scapularis are larger, more or less acute toward the middle and extend over the middle costa, in some cases to the suture. In A. jeanae , the largest yellow mark does not pass the middle costa, and is smaller, and truncate toward suture. Setae on the elytra of A. jeanae are black, but are mixed black and white on A. scapularis . The elytra of A. jeanae have a slightly uneven, almost "crinkled" appearance under certain lights, whereas the elytral surface of A. scapularis is smooth in comparison. Elytral costae in A. jeanae are much more reduced than in A. scapularis . Acmaeodera jeanae has a "flatter" appearance. Acmaeodera mixteca Westcott, 1998 ( Fig. 3 View FIGURES 1 – 3 ) is considerably larger and much more robust than either A. jeanae or A. scapularis , and the largest elytral marking is very broad along the lateral margins, tapering slightly toward and touching the suture. Distinctly fractured markings are also present near the apex of the elytra in A. mixteca . The elytral punctures on A. mixteca are much larger in comparison to the other two species. It is beyond the scope of this paper to assess the phylogenetic relationships of these species, however, A. jeanae and A. scapularis appear to be closely related. Acmaeodera mixteca appears to be more closely allied to A. mimicomixteca Westcott, 1998 and possibly to A. aeneoflava Westcott, 1998 than to either A. jeanae or A. scapularis . 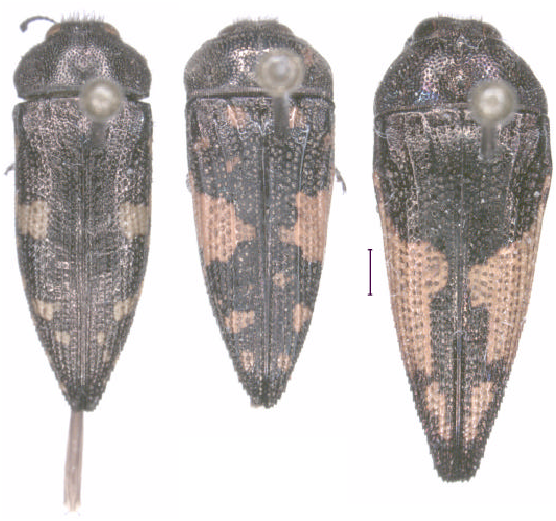 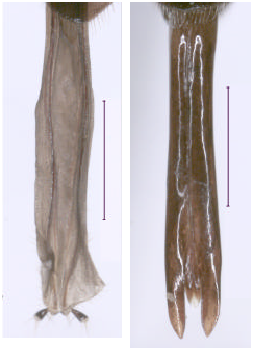