Description. Spherical to elongate, thickly encrusting sponge, extremely wrinkled, folded, cavernous, contracted in life and when preserved, holotype about 4 cm high and wide ( Fig. 7View FIGURE 7 A), by 2 cm thick, paratype about 6 cm long, 2 cm wide, 2 cm thick ( Fig. 7View FIGURE 7 B). Surface covered in thin, almost strappy turrets about 1 cm high, some tapering to a point, some appear rounded on the ends, location of the areolate pore fields cannot be determined because of condition of specimens. Texture in life soft, compressible. Colour in life is bright orange-brown, turrets slightly lighter in colour. Attached to large, smooth pebbles ( Fig. 7View FIGURE 7 A, B).

Skeleton. A layer of vertically positioned anisodiscorhabds, several spicules deep, forms a palisade in the ectosome, below which is a layer of megascleres, 300–1000 µm thick, that are paratangential to the ectosome, criss-crossed in arrangement, and vertical near the pore fields. The choanosomal architecture is fibrous with huge tracts, 250–500 µm wide, forming a wide-meshed, irregular reticulation. Abundant anisodiscorhabds are scattered between the megascleres in the choanosome.

Substrate, depth range and ecology. Collected by trawl from a relatively flat seafloor with pebbles, cobbles and sand, in an area experiencing relatively high currents. Grows on bedrock, pebbles, sand and cobbles, in moderate current at a depth of 139 m.

Etymology. Named for J. Lincoln Freese, retired fisheries research biologist from Auke Bay Laboratories ( NOAA Fisheries), who pioneered the use of deep-sea submersibles to study seafloor and sponge ecology in the Gulf of Alaska.

Remarks. The anisodiscorhabds of L. lincfreesei  sp. nov. are very similar in appearance to those of southern hemisphere L. ( Biannulata  ) species ( Fig. 6View FIGURE 6 Q –AF), with only two whorls of spines between the terminal substructures, the median and subsidiary whorls. In the majority of microscleres in the type specimen, the basal whorl forms a cuff of double spines slanting away from the shaft of the spicule; the manubrium is not apparent as an independent substructure. Similarly, the apical whorl forms a crown of doublet spines that slant away from the shaft and an apex tuft or spine is not apparent ( Fig. 7View FIGURE 7 F, H –I).

In about 40 % of anisodiscorhabds in the holotype, and about 10 % in the paratype, and in some protorhabds, there is a large, frequently divided, acanthose manubrium projecting from the base of the spicule ( Fig. 7View FIGURE 7 G, J). Although the presence of a distinctive manubrium in some spicules might suggest affinity of L. lincfreesei  sp. nov. with the subgenus Latrunculia  , the most pragmatic decision is to recognise the dominant form of the microscleres, those without a manubrium, thus classifying the species with the L. ( Biannulata  ) group. In terms of the overall structure and micro-ornamentation, the anisodiscorhabds of L. lincfreesei  sp. nov. are very similar to those of L. (B.) triloba Schmidt, 1875  ( Fig. 14View FIGURE 14, 16View FIGURE 16 A –F), from the southwest coast of Norway, but the spicules of the latter are much smaller (anisostyles, 370 (350–385) × 11 (10–13) µm; anisodiscorhabds, 48 (45–53) × 32 (28–35) µm). Latrunculia (B.) lincfreesei  sp. nov. is distinguishable from other North Pacific Latrunculia  species in the form of the sponge, being highly cavernous with strappy surface turrets, and in the larger size of the anisostyles and anisodiscorhabds, which are also highly characteristic in morphology and ornamentation. 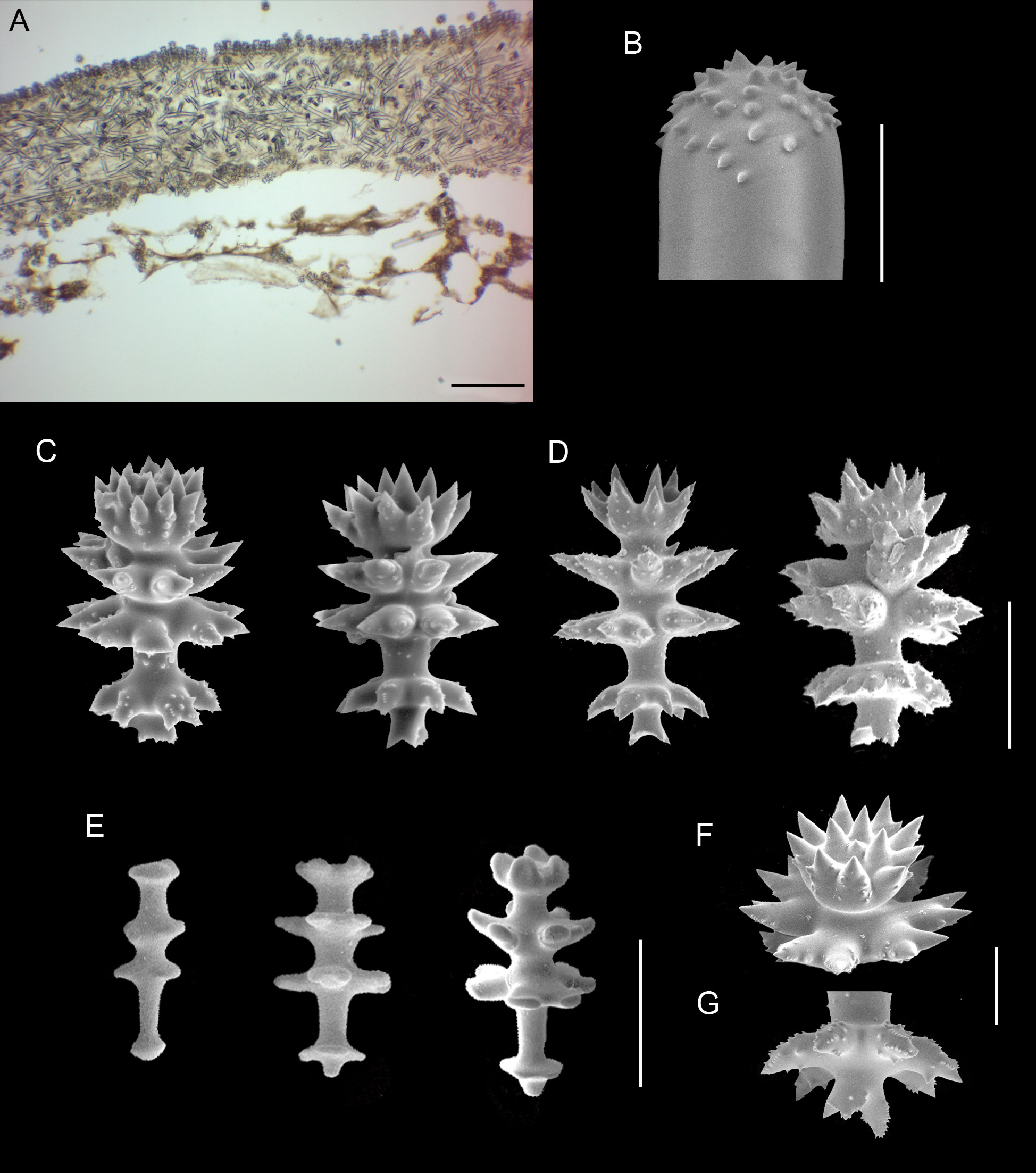