Description. The holotype is a thickly encrusting sponge ( Fig. 14View FIGURE 14 A –B, D) with compressed tapering aquiferous turrets on the surface, some terminating in oscules, some blunt with microscopic pores. The preserved holotype was originally attached to a Terebratulina  brachiopod shell, now composed of six fragments in two lots, probably originally about 48 mm long and wide, about 5–7 mm thick, aquiferous turrets about 2–4 mm long. Location of the areolate pore fields, if present, cannot be determined because of condition of specimens. Texture in life soft, compressible. Colour of preserved holotype golden brown.

Microscleres ( Fig. 14View FIGURE 14 F, H –L), anisodiscorhabds with four distinct whorls, the first is the basal whorl (manubrium indistinguishable or absent), above which is the median, subsidiary and apical whorls, apex absent. Occasionally subsidiary and apical whorls form a barely differentiated tuft of spines, those at the apex are often elongated and irregular, 48 (45–53) × 32 (28–35) µm.

Remarks. In searching for the holotype of Latrunculia tricincta  at the Museum für Naturkunde Berlin, Dr Carsten Lüter also found the holotype of Latrunculia triloba ( Schmidt, 1875)  , from Bukenfjord on the southwest coast of Norway. The holotype of L. triloba  is a wet specimen divided into two lots (preserved in two glass jars carrying the same number); Lot 1 contains 5 pieces, one of which is attached to a Terebratulina  brachiopod shell, and Lot 2 contains a single specimen. Unfortunately, the microscope slide mentioned in Hentschel (1929: 870) could not be located. As the gross morphology was not shown in the original description, the illustrations of the microscleres are stylised, and the spicules were not measured, we have taken the opportunity to re-describe the species here, provide new observations ( Fig. 14View FIGURE 14, Table 9) and to assign the species to one of the Latrunculia  subgenera.

Schmidt (1875) stated that the anisostyles are thickest centrally and that the anisodiscorhabds showed greatest kinship with Sceptrella regalis Schmidt, 1870  of Florida, with four whorls of projections that, in end-on profile, form three palmate, indented whorls. Examination of the microscleres of L. triloba  ( Fig. 14View FIGURE 14 H –L) reveals that the normal anisodiscorhabds are not as regular as those of Sceptrella regalis  (see Fig. 1View FIGURE 1 F, left) and the second category of microsclere, the ‘amphityles’ or isoconicorhabds, are absent.

The microscleres are in fact, typical of Latrunculia  ( Biannulata  ) species; the anisodiscorhabds have median, subsidiary and apical whorls, an apex, and an undifferentiated basal whorl and manubrium. We transfer the species to subgenus Biannulata  ( Table 9); this represents the first record of the subgenus outside the Pacific Ocean and further north than South Africa in the Atlantic Ocean. 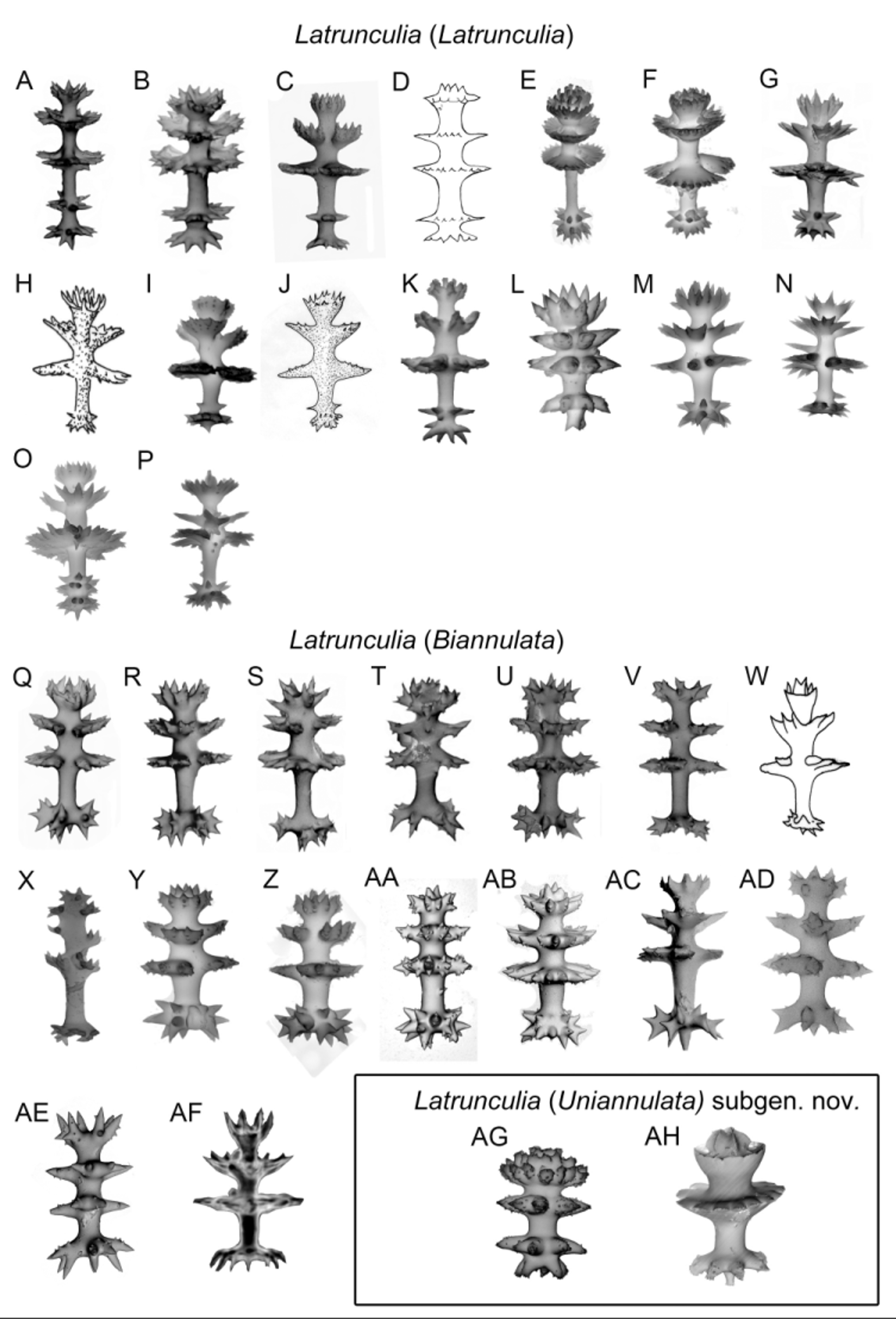