The southern green stink bug is a cosmopolitan pentatomid, highly polyphagous, feeding on both cultivatedand uncultivated plants. Becauseof this, and because it is a pest of many economic plants worldwide, it is probably the most studied pentatomid.

Among the species observed on privet, N. viridula   was, by far, the most abundant ( fig. 1 View Figs ). Nymphs and adults were present during most of the year, particularly from earlyautumn to early-winter (March-June). Apparently this occurred due to dispersion of the bugs from rural areas, where they colonize soybean, Glycine max (L.) Merrill   , which is harvested late February-early March, to the urban areas, where privet trees are present at full fruiting stages at this time. Nymphs and adults were not recovered during January- February, when they were possibly concentrated on soybean, and July-September, when fruiting structures are less abundant, and the bugs look for alternate hosts or are present in low numbers.

which isthe reason why privetfruits are being used tomass rear this bug in the laboratory. This is reinforced by the fact that far more nymphs were captured than adults, because of the high rate of egg production by females. 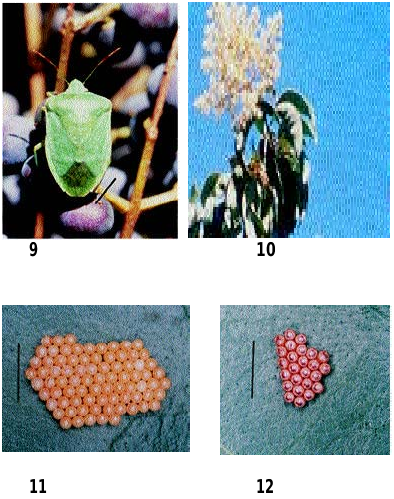