Chris J. Hodgson & Douglas J. Williams, 2016, (Hemiptera: Sternorrhyncha, Coccomorpha) with particular reference to species from the Afrotropical, western Palaearctic and western Oriental Regions, with the revival of Antecerococcus Green and description of a new genus and fifteen new species, and with ten new synonomies, Zootaxa 4091 (1), pp. 1-175: 145-147

Dorsum. Eight-shaped pores of about 4 sizes: (i) larger pores, each 13.0– 13.5 x 8 µm, present in a ring of 20– 25 around apex of each stigmatic pore band; (ii) a slightly smaller pore, each 11.0– 12.5 x 8 µm, each sunk in a deep indentation, in groups of 45–52 in centre of apex of each stigmatic pore band; also in a further ring just outside ring of largest pores; these becoming smaller (size (iii)) further from apical group, down to about 9 x 6 µm; and (iv) small pores, each 5 x 3 µm, forming a lattice-like pattern, with seven radial bands on each side, a submedial circle of pores, divided medially by 4 transverse bands and 2 longitudinal bands (see figure); very slightly smaller pores, each 4.5 x 2.5 µm, present sparsely in areas between lattice lines. Simple pores very sparse throughout, each 1.5 – 2.0 µm wide. Cribriform plates small, each 8–10 µm wide, in a single median group of 9, each with median-sized micropores and a fairly broad margin. Dorsal setae extremely few, each setose, and mainly 5 µm long, but also with a single fleshy seta within apex of each stigmatic pore band. Tubular ducts short, each about 16 µm long with many spines within cup-shaped invagination of outer ductule; of three widths: (i) a broad duct, each 4.0– 4.5 µm wide, present in lines parallel to small 8 -shaped pores bands, forming a reticulate pattern, and also in a group medially on posterior abdominal segments; (ii) ducts of intermediate width, each about 3.5 µm wide, present between larger ducts and narrower ducts; and (iii) narrow ducts, each 2.5 –3.0 µm wide, present throughout. Anal lobes membranous with a well-developed area of sclerotization on inner margin, each with diagonal ridges, each lobe 100 µm long; each lobe with a large apical seta, both broken; each inner margin with 3 strongly setose setae towards base, each 20–23 µm long, and 2 fleshy setae on dorsum nearer apex, more anterior seta 12–13 µm long, more posterior 8–9 µm long; ventral surface without a seta near apex but with 2 short setose setae (probably medio- and anteroventral setae) more anteriorly, each 7–8 µm long; apparently without an outer margin seta; each lobe with longitudinal lines of about 5 small 8 -shaped pores dorsally and 6 ventrally. Median anal plate not visible. Anal ring with 4 pairs of setae, each about 110 µm long, each narrowing gradually towards apex.

Venter. Eight-shaped pores of 2 sizes: (i) intermediate-sized pores, similar to those on dorsum, sparse near each antenna, and (ii) small pores, similar to those on dorsum, in radial lines meeting those from dorsum, and also in a more or less semi-circular band submedially; with a few in transverse bands on abdominal segments and on anal lobes. Simple pores, similar to those on dorsum, very sparse. Small bilocular pores, each 3.5 –4.0 x 2.5 µm, frequent medially on head and thorax. Spiracular disc-pores small, each 3–4 µm wide, those near spiracle usually with 5 loculi but otherwise with mainly 7 or 8 loculi; posterior band not bifurcated; with very few pores (10–15) in each stigmatic band between spiracle and apex, but then forming an almost round apical group on dorsum; numbers in each apex uncertain but probably more than 100; each apical group distinctive as described above under dorsum. Also with 17–19 pores, mainly 5 -locular, laterad to each antenna. Multilocular disc-pores, each about 6 µm wide with mainly 10 loculi, arrangement uncertain but in broad bands on segments V –VII and apparently just submarginally on segments IV –II and metathorax; perhaps as follows: VIII none; VII with a total about 75, but marginally band appears to turn anteriorly towards segment VI; also with a small group of 4 medially between VI and VII; VI band broken but perhaps with a total of about 115 disc-pores, plus a submarginal line of 5 between segments VI and V; V with a total of perhaps 80 (only visible on one side) and then in submarginal groups, IV with 5–10, III & II 2 on each side, and metathorax with 2 on each side. Tubular ducts similar to narrow type on dorsum, or even slightly narrower; present throughout. Ventral setae slightly more abundant than on dorsum on posterior abdominal segments but all setose and short; preanal setae each 40 µm long; companion setae short. Leg stubs absent. Antennae unsegmented, very short, each about 25 µm long and 25 µm wide, with about 4 fleshy setae and 2 setose setae; without either an apical cone or a distinct setal cavity. Clypeolabral shield 145 µm long. Spiracular peritreme each 33–35 µm wide. 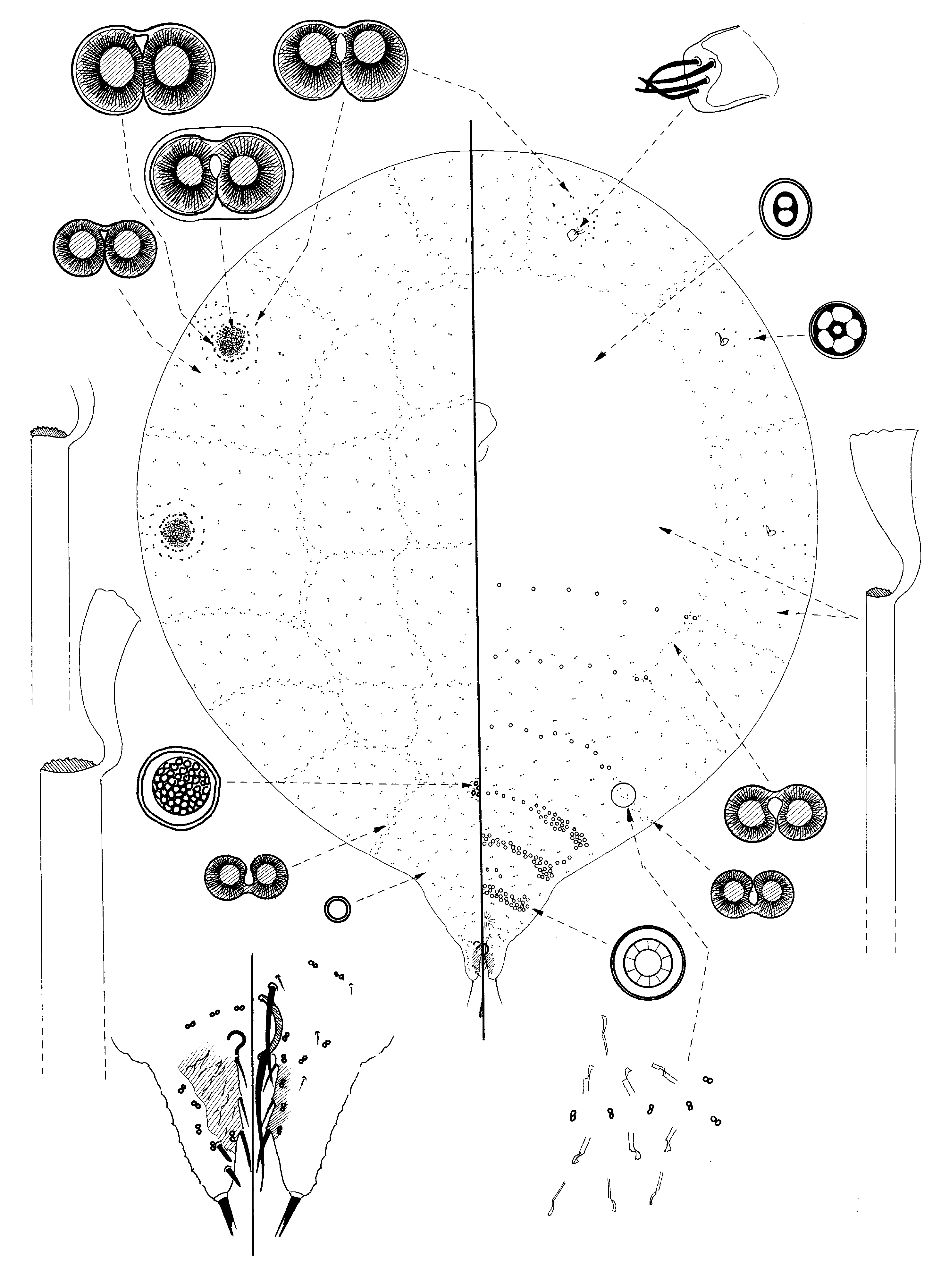