Chris J. Hodgson & Douglas J. Williams, 2016, (Hemiptera: Sternorrhyncha, Coccomorpha) with particular reference to species from the Afrotropical, western Palaearctic and western Oriental Regions, with the revival of Antecerococcus Green and description of a new genus and fifteen new species, and with ten new synonomies, Zootaxa 4091 (1), pp. 1-175: 69-71

Note: description taken from all specimens.

Venter. Eight-shaped pores similar to intermediate-sized pores on dorsum but slightly larger, each 8.5 x 5.5 µm, in a fairly wide submarginal band and sparsely across abdominal segments in bands 1 pore wide; also with a few along lateral margins of posterior abdominal segments. Simple pores similar to those on dorsum but very sparse; those on posterior abdominal segments slightly larger. Bilocular pores small, each about 5 µm widest, frequent medially on head and thorax. Spiracular disc-pores small, each 5–6 µm wide, mainly with 5 loculi (but a few with more loculi near apex of some bands), in bands mainly 2–4 pores wide but widening near apex, each band with 70–100 pores; posterior band bifurcate; each band also with 4–6 intermediate-sized 8 -shaped pores close to each pore band; a small group of 6–8 5 -locular pores also present near each antenna. Small convex closed pores absent. Multilocular disc-pores, each 8–13 µm wide and mainly with 10–13 loculi, distributed on abdomen as follows: VIII with a line of 8 or 9 on each side: VII with a line of 14–25 on each side of vulva; VI 3–5 submarginally + 28–35 medially, V 3 or 4 submarginally + 30 medially, IV 6 or 7 submarginally + 33 medially; III 6–8 submarginally + 30–32 medially; II 2–6 submarginally + about 30 medially, and metathorax with 6–11 laterad + 0–2 mesad to each hind leg; none present associated with spiracles. Tubular ducts narrower than those on dorsum, each 2.0 µm wide and 33–35 µm long. Ventral setae showing nothing distinctive but all setose and short; preanal setae each 65 µm long; companion setae short. Leg stubs small. Antennae probably unsegmented, each 40– 50 µm long, with about 7 or 8 setose and fleshy setae, mainly in a distinct setal cavity, and with a rounded cone-like apex. Clypeolabral shield 160–170 µm long. Spiracular peritremes each 28–30 µm wide.

Comment. Antecerococcus kakamegae   sp. nov. is very similar to A. royenae Brain   from South Africa. It differs mostly in having two clearly different sizes of 8 -shaped pores on the dorsum, the larger pores in groups around the submargin— A. royenae   arguably has two sizes of dorsal 8 -shaped pores, although the two sizes are very similar and variable, the larger restricted to near the stigmatic pore bands. Other differences are (character-states for A. royenae   in brackets) (i) presence of two pairs of cribriform plates (only one pair, although Lambdin & Kosztarab (1977) mention occasionally two pairs); (ii) absence of slender setae on inner margins of anal lobes (three pairs shown as present in Lambdin & Kosztarab’s figure but these probably refer to the medioventral setae, which are absent on A. kakamegae   ; see present description of A. royenae   ); (iii) anteroventral and medioventral setae considered absent (present and unusually long); (iv) more quinquelocular disc-pores in each stigmatic pore band— 70–100 in A. kakamegae   (fewer than 40 in A. royenae   ), and (v) absence of a band of simple pores on dorsum associated with cribriform plates (a distinct band of simple pores present laterad and between cribriform plates). It is just possible that this is an extreme form of A. royenae   but, based on the above differances, it is here considered that they represent separate species.

The adult female of A. kakamegae   falls within Group B in the key to species of Antecerococcus   , and keys out closest to A. royenae   and A. steppicus   .

Name derivation: kakamegae   —named after the small town in the Rift Valley, Kakamega, near which this species was collected, and is in the Latin genitive, meaning of or from. 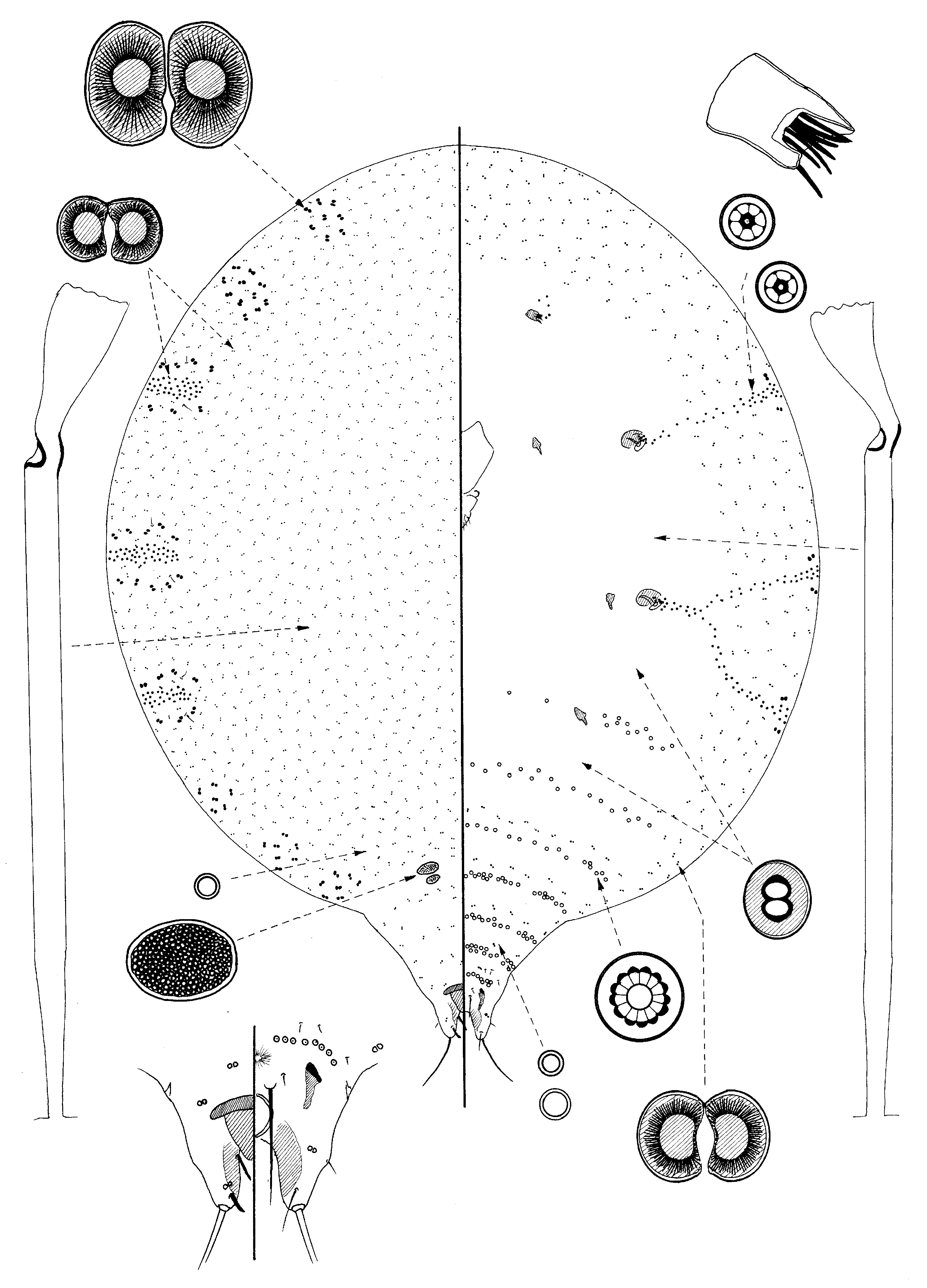