Chris J. Hodgson & Douglas J. Williams, 2016, (Hemiptera: Sternorrhyncha, Coccomorpha) with particular reference to species from the Afrotropical, western Palaearctic and western Oriental Regions, with the revival of Antecerococcus Green and description of a new genus and fifteen new species, and with ten new synonomies, Zootaxa 4091 (1), pp. 1-175: 97-100

Venter. Medium-sized pores, similar to type (ii) on dorsum, each 10–12 x 5.5 –7.0 µm, forming a fairly broad band on head and thorax and broad transverse bands across more posterior abdominal segments. Simple pores as on dorsum, very sparse, perhaps present throughout. Small bilocular pores oval, each 6–7 µm widest, present medially throughout head and thorax. Spiracular disc-pores small, each 5.0 µm wide with 5 or 6 loculi, in a small dense group of 7–10 disc-pores just anterior to each spiracle and with a larger group just laterad to each peritreme, becoming less frequent in a narrow band 2–3 pores wide near margin; each band barely broadening on dorsum; posterior band bifurcated; each anterior band with 70–90 pores and each posterior band with 40–60 pores; each apical group with 0–4 minute 8 -shaped pores and often with 1 or 2 setae; also with 3–5 quinquelocular disc-pores near each antenna. Small convex closed pores absent. Multilocular disc-pores, each 6–7 µm wide with mostly 10 loculi, distributed on abdomen as follows: IX + VIII 0–3 laterally; VII 4 or 10 submarginally + 0–10 submedially; and then across more anterior segments in bands mainly 2–4 wide: VI 3–11 submarginally + 28–59 medially; V 6– 17 submarginally + 51–85 medially; IV 6–22 submarginally + 44–87 medially; III 5–11 submarginally + 29–58 medially; II 8–14 submarginally + 15–25 medially; and metathorax with 7–9 marginally + 0–10 medially; none present near each spiracle. Tubular ducts similar in length to those on dorsum but slightly narrower; present throughout. Ventral setae slightly more abundant than on dorsum but all setose and short; preanal setae each 90 µm long, companion setae short, about 10 µm long. Leg stubs absent (minute, on both sides of prothorax on type specimen of C. polyporus   but other legs absent). Antennae unsegmented, each about 40 µm long, with 6 + fleshy setae, without either a setal cavity or an apical cone. Clypeolabral shield 150–175 µm long. Spiracular peritremes each 38–45 µm wide.

Comment. It is clear from a comparison of the present figure, made from a type specimen of C. polyporus   , with the drawings of Matesova (1975, p. 785) of this species and those of Borchsenius (1960, p. 106) of C. perowskiae   (made from the type series (Gavrilov, pers. com.)) that these are all the same species. The name C. polyporus   is therefore a junior synonym of C. perowskiae   . The figure in the paper by Matesova (1974, here redrawn as Fig 2 View FIGURE 2 ) shows the degree of variation in the 8 -shaped pore distribution on the dorsum, which are about twice as frequent on one specimen as on the other. The description by Lambdin & Kosztarab (1977), based on the topotypic material listed above, has even fewer 8 -shaped pores according to their figure. However, this latter material was studied as part of this revision and, whilst there are fewer large 8 -shaped pores on the dorsum than on the St. Petersburg and other material studied here, they are much more frequent than illustrated by Lambdin and Kosztarab (1977). The above description also differs from that of Lambdin and Kosztarab as follows (Lambdin and Kosztarab’s data in brackets): (i) at least 3, sometimes 4, sizes of dorsal 8 -shaped pores (2); (ii) 4–8 cribriform plates in each submedial group, often fused in pairs (3 or 4 plates), and (iii) eight transverse bands of multilocular disc-pores, most anterior band on metathorax (only 7 bands).

Although Matesova (1975) considered that C. polyporus   was close to C. cistarum   , they are not considered to be very close in this study. Antecerococcus perowskiae   differs from A. cistarum   (data for A. cistarum   in brackets) as follows: (i) generally far more 8 -shaped pores of at least three sizes on dorsum, in a series of swirled patterns (much less frequent, not apparently swirled and of two sizes); (ii) presence of a band of large 8 -shaped pores along the margins of the posterior abdominal segments (absent); (iii) in the structure of the cribriform plates, which are fused and with several lying within a single cavity (not fused and in separate cavities), and (iv) multilocular discpores on abdomen abundant, each band 2–4 pores wide (much less frequent and two pores wide at most).

Antecerococcus perowskiae   can be characterised by the following combination of character-states: (i) dorsum with three or four sizes of 8 -shaped pore; (ii) largest 8 -shaped pores present throughout much of dorsum of head, thorax and anterior abdominal segments, often in swirls; (iii) largest pores also in a line of 7–10 on each side of posterior abdominal segments; (iv) intermediate-sized pores present throughout; (v) apex of each stigmatic band with 0–4 small 8 -shaped pores; (vi) cribriform plates in submedial groups of 4–8, often fused on each side of segment IV; (vii) leg stubs absent; (viii) posterior stigmatic pore bands bifurcated; (ix) multilocular disc-pores abundant in bands across metathorax and all abdominal segments; and (x) antennae without either a conical apex or a setal cavity.

The adult female of A. perowskiae   falls within Group D in the key to species of Antecerococcus   and keys out close to A. delottoi   , A. intermedius   and A. longipilosus   . 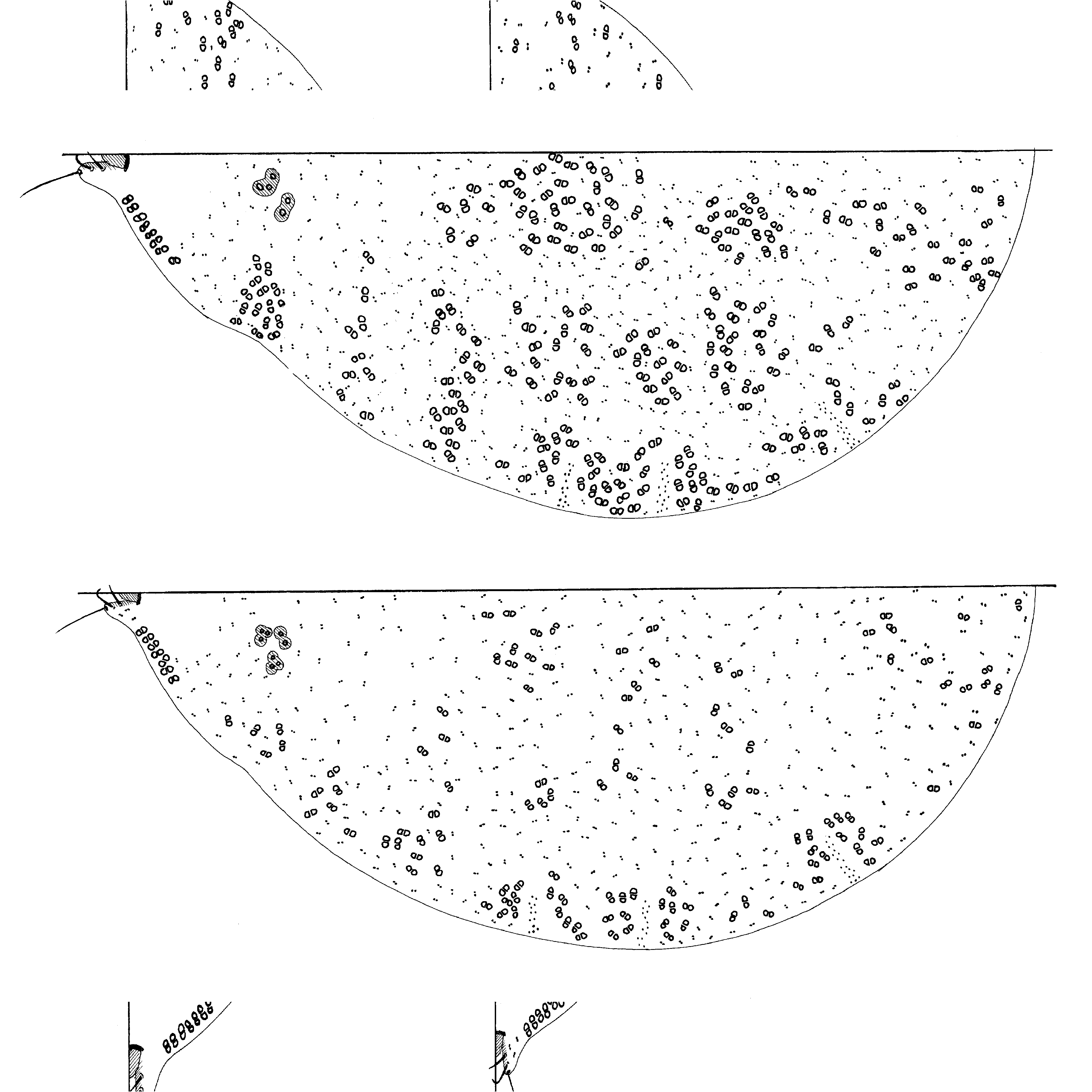 FIGURE 2. Dorsal view of adult females of Antecerococcus perowskiae (Archangelskaya) showing difference in abundance of large 8 - shaped pores on dorsum. Redrawn after Matesova (1975, figs 1 & 2) (as Cerococcus polyporus Matesova). Compare with Fig. 36 (of A. perowskiae) in which the transverse bands and medial swirls are distinct. Similarly compare Figs 40 and 41, where the larger 8 - shaped pores appear rather randomly distributed in Fig. 40, but in more distinct swirls in Fig. 41.

FIGURE 2. Dorsal view of adult females of Antecerococcus perowskiae (Archangelskaya) showing difference in abundance of large 8 - shaped pores on dorsum. Redrawn after Matesova (1975, figs 1 & 2) (as Cerococcus polyporus Matesova). Compare with Fig. 36 (of A. perowskiae) in which the transverse bands and medial swirls are distinct. Similarly compare Figs 40 and 41, where the larger 8 - shaped pores appear rather randomly distributed in Fig. 40, but in more distinct swirls in Fig. 41. 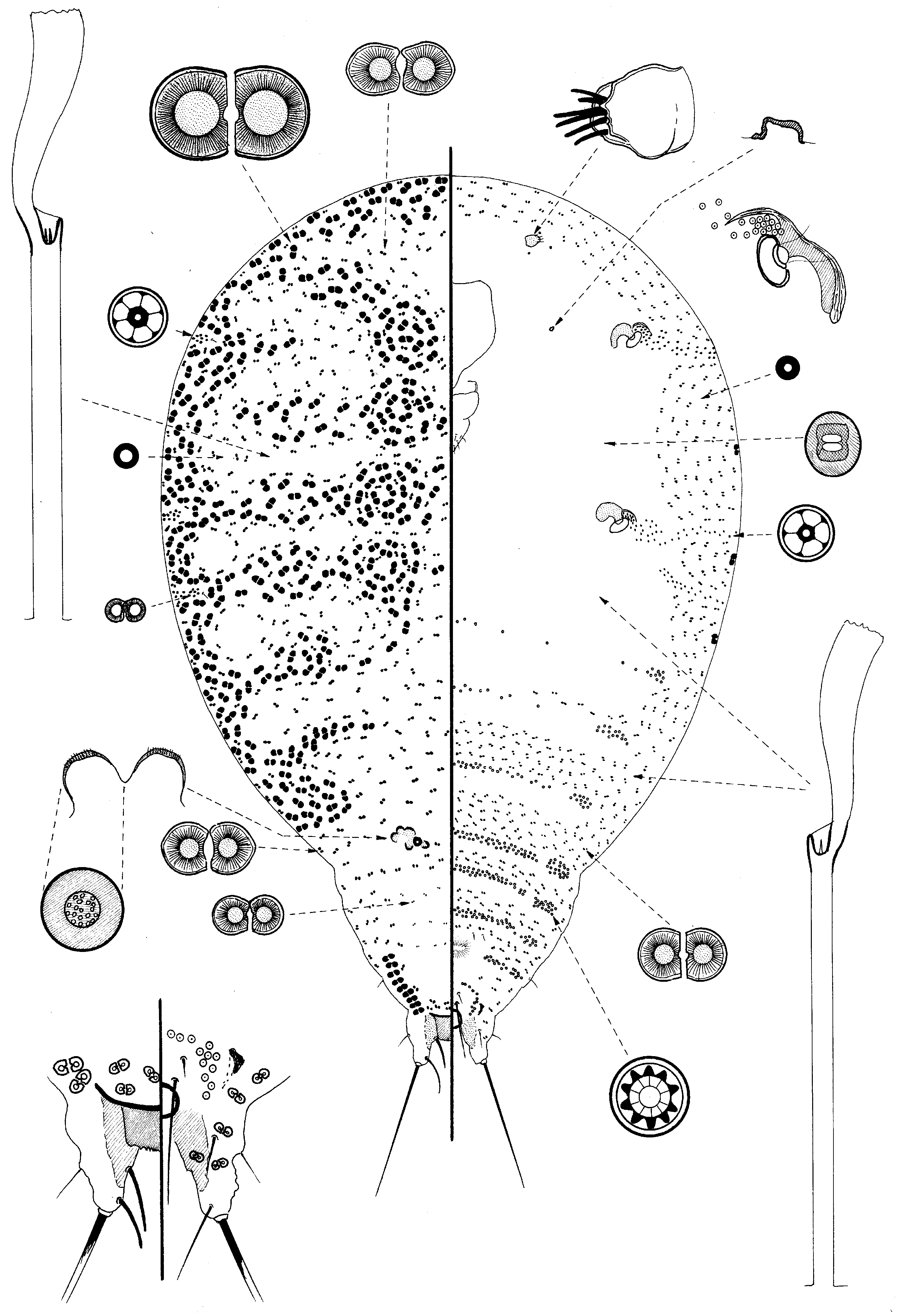