Chris J. Hodgson & Douglas J. Williams, 2016, (Hemiptera: Sternorrhyncha, Coccomorpha) with particular reference to species from the Afrotropical, western Palaearctic and western Oriental Regions, with the revival of Antecerococcus Green and description of a new genus and fifteen new species, and with ten new synonomies, Zootaxa 4091 (1), pp. 1-175: 62-64

Venter. Eight-shaped pores of 2 shapes, as on dorsum, with a similar elongate pore (type i) in a broad submarginal band on head and thorax; and more rounded pore (type ii) in a narrow band mesad to elongate pore band and also in transverse bands across each abdominal segment; more posterior pores slightly smaller, each 6.5 – 7.0 x 4.0– 4.5 µm. Simple pores sparse. Small bilocular pores, each about 5.0 µm widest, frequent medially on head and thorax. Spiracular disc-pores each 5–7 µm wide with mainly 5 loculi but number of loculi increasing (up to about 10) towards apex; posterior band bifurcated; each band with a group of pores near each peritreme and then pores sparse initially, increasing to a broad apex; each band with 50–70 pores; each band without minute 8 -shaped pores towards apex; also with a small group of about 4 or 5 loculate pores just mesad to each antenna, sometimes almost meeting between antennae; some with only 4 loculi. Small convex closed pores absent. Multilocular discpores, each 7–8 µm wide, mainly with 10 loculi, distributed as follows: abdominal segment VIII –IV 0; III with 0 or 1 on each side submarginally; II with 2–5 on each side submarginally (rarely with 1 medially); plus a group of 5–8 just laterad to each hind-leg stub. Tubular ducts very slightly narrower than those on dorsum; present throughout. Ventral setae: preanal setae each 105–115 µm long; companion seta unusually long, each 45–50 µm long. Leg proportionately quite large sclerotized stubs, pointed. Antennae unsegmented, each 25–35 µm long and 25–35 µm wide, with 6–8 fleshy setae; apex drawn out into a large triangular cone-shaped point but without a setal cavity. Clypeolabral shield 150–165 µm long. Spiracular peritreme each 28–30 µm wide.

Comment. At a quick glance, the adult female of A. insleyae   looks very similar to that of A. asparagi   , both having two types of dorsal 8 -shaped pores, 1 elongate and present almost throughout, and the other rounded and restricted to near each stigmatic pore band. However, closer study shows that they are otherwise very different. In addition to the above, A. insleyae   has the following combination of character-states: (i) dorsal 8 -shaped pores sparse and not in obvious whorls, (ii) large 8 -shaped pores absent; (iii) two cribriform plates present on each side of abdominal segment IV; (iv) leg stubs present; (v) each stigmatic pore band with fewer than 100 pores, each band lacking minute 8 -shaped pores; (vi) posterior stigmatic bands bifurcated; (vii) multilocular disc-pores extremely few, restricted to submarginally on metathorax and abdominal segments II and III; (viii) all setae on anal lobes much longer than usual, and with both antero- and medioventral setae present on ventral surface of each lobe, and (ix) each antenna with a strong conical point on apex but no setal cavity.

The adult female of A. insleyae   falls within Group B in the key to species of Antecerococcus   , and keys out close to A. asparagi   and A. muntingi   , with all three having elongate 8 -shaped pores and from South Africa.

Name derivation. A. insleyae   is named after the collector, Patricia (Pat) Insley, who was an avid collector of South African scale insects, which she gathered to rear out parasitoids for the late Prof. Dave Annecke. 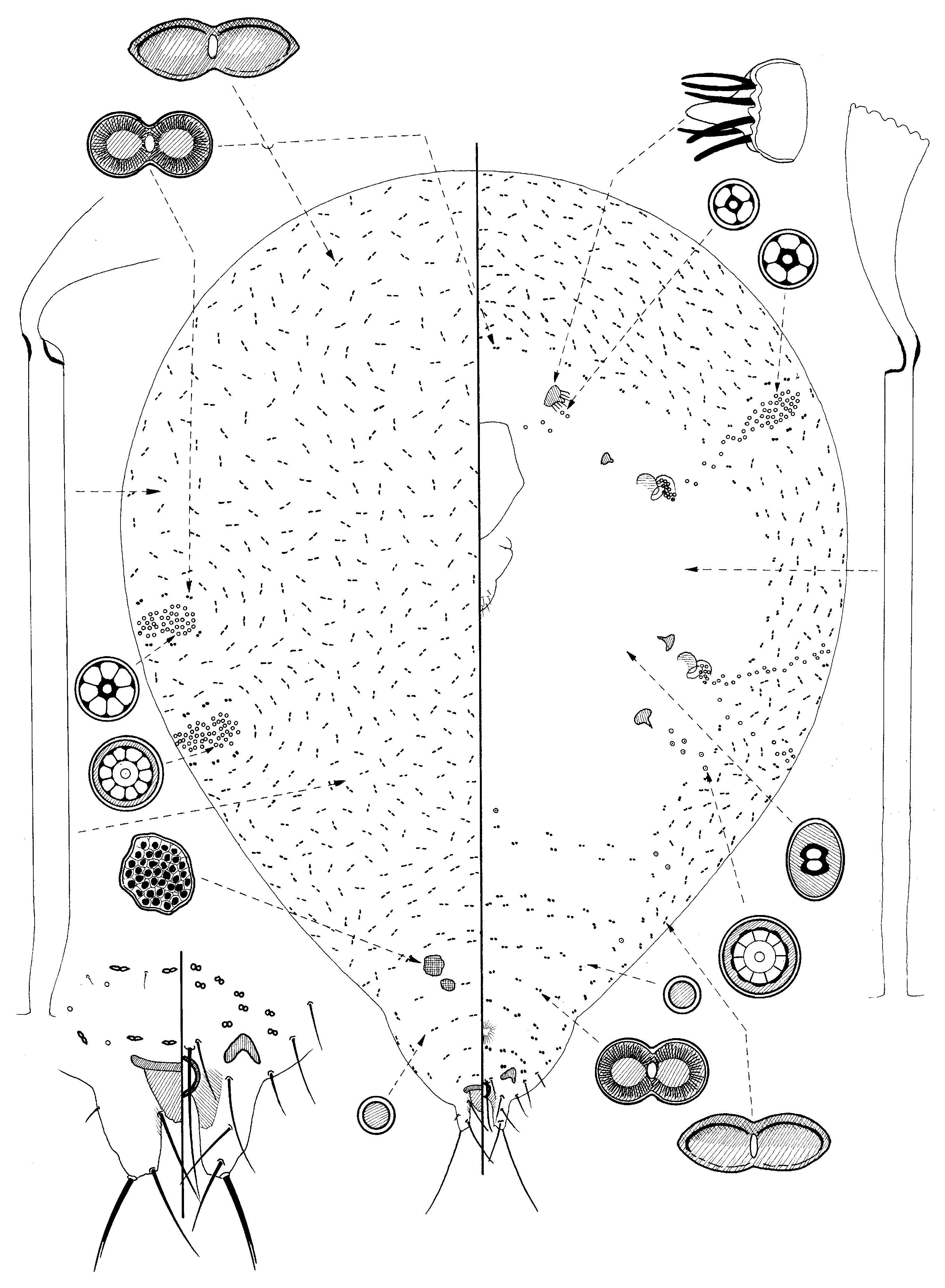