, found worldwide, is represented by 838 extant species, and four fossil species (AntWeb 2016); 25% of the species occur in the Neotropics ( Lattke and Aguirre 2015). Most species of this genus occur in tropical rainforest, some in grassland and scrub, usually nesting in soil and rotting wood, though a few species live in arboreal cavities in tropical rain forest ( Brown and Wilson 1959; Bolton 2000). Besides the most common form of reproductive females (gyne) some species of Strumigenys   have the ergatoid forms ( Silva and Brandão 2014). Species of the genus are predators of Collembola, mites, insect larvae, and other small arthropods ( Wilson 1953; Hölldobler and Wilson 1990; Bolton 1999; Kaufmann et al. 2003), although, some few species occasionally feed on sugary substances ( Brown and Wilson 1959). To capture their prey, some species use a kinetic mode of attack ( Gronenberg 1996; Bolton 1999).

Despite being a relatively speciose genus and commonly sampled in biodiversity surveys ( Morini et al. 2007; Silva et al. 2007; Suguituru et al. 2013; Ulysséa and Brandão 2013; Camacho and Vasconcelos 2015; Souza et al. 2015) most species records are based upon a few specimens ( Bolton 2000), as is the case with S. fairchildi Brown, 1961   . Strumigenys fairchildi   belongs to the tococae -group (comprised by S. anthocera Lattke & Goitía, S. extirpa Bolton, S. fairchildi Brown, S. tococae   Wheeler & Bequaert, and S. usbensis Lattke & Goitía) and was originally described based on one worker collected in Panama ( Brown 1961). Since then, the species has been recorded in Costa Rica ( Bolton 2000) and most recently in Ecuador ( Salázar et al. 2015). In the present paper we report the first record of S. fairchildi   in Brazil, considerably extending the distribution limits for the species.

One S. fairchildi   worker ( Figure 1 View Figure1 ) was collected in November2013,during the beginning of the rainy season in a protected area for biodiversity conservation of the Parque Estadual do Cristalino ( Figure 2 ), a continuous pristine forest in the Novo Mundo municipality , of Mato Grosso state (09°28 ' S, 055°50 ' W) GoogleMaps   . In this region, known as the Arc of Deforestation ( Michalski et al. 2008), the ant fauna is still not very well known with just a few studies contributing to expand our knowledge of the distribution of some rarely collected species ( Vicente et al. 2011, 2012, 2015). According to the Köppen classification, the climate in this region is characterized as tropical humid (Am) with a mean annual temperature of 25°C and an annual precipitation ranging from 2,800 mm to 3,100 mm ( Alvares et al. 2013). There are two well-defined seasons, a rainy season between November and April and a dry season between May and October ( Vicente et al. 2014). The local altitude ranges from 100 to 400 m above sea level and the vegetation is classified as Open Ombrophilous Forest and ecological tension zones between the Ombrophilous Forest and Savanna (Cerrado), Savanna and Seasonal Forest, Seasonal Forest and Ombrophilous Forest (Instituto Brasileiro de Geografia e Estatística 2004).The specimen was collected in understory vegetation (plants 1–3 m high) using a beating tray in one trail of the Research Program in Biodiversity (Programa de Pesquisas em Biodiversidade, PPBio grid 09°28 ' 29.2 ʺ S, 055°50 ' 0 0.2 ʺ W, altitude 304 m as estimated in Google Earth™).

The specimen is deposited in the ant collection of the Laboratório de Sistemática, Evolução e Biologia de Hymenoptera   of the Museu de Zoologia da Universidade de São Paulo (MZSP), SP, Brazil (the ant collection of the MZSP does not have numerical identifiers, therefore, the author’s number is REV_Strumi001). It was photographed with a Leica Application Suite V3 system at the MZSP and edited in Adobe Photoshop© version 7.0. The distribution map was generated using the Quantum GIS 2.6.0 software, with shapes available at Natural Earth, the coordinates were imported from Google Earth™ after consulting the records for S. fairchildi   in the literature ( Bolton 2000; Salazar et al. 2015).

To identify Strumigenys   ant species we used the taxonomic key provided by Bolton (2000). According to Bolton (2000), S. fairchildi   ( Figure 1 View Figure1 ) is morphologically characterized by the combination of (1) first gastral tergite finely and very densely longitudinally costulatestriolate; (2) surface of this sclerite with minute inconspicuous appressed pubescence only, without spatulate hairs such as are present on the cephalic dorsum but with a few scattered flagellate hairs that are extremely fine, easily broken or lost; (3) apicoscrobal hair absent; (4) maximum diameter of eye ca 0.14; (5) propodeum in profile with a pair of long spines at top of declivity; (6) base of declivity with a pair of much shorter acute teeth that are narrowly triangular; (7) ventral surface of petiole with a narrow continuous strip of spongiform tissue.

and spatulate hairs in S. usbensis).

Furthermore, four ant collections (Museu de Zoologia da Universidade de São Paulo [MZSP], Instituto Nacional de Pesquisas da Amazônia [INPA], Laboratório de Ecologia de Comunidades da Universidade Federal do Mato Grosso [LEC/UFMT] and Collection Padre Jesus Santiago Moure of the Universidade Federal do Paraná [DZUP]) that house a large number of specimens of both the Amazon and Brazilian ant fauna were consulted and no other specimen of S. fairchildi   was found. Thus, the new record reported here suggests that more sampling efforts applying different techniques of sampling should be used to reveal the distribution of this species and contribute to increase the knowledge of the Brazilian ant fauna that remains underestimated, especially for species that inhabit vegetation strata. As seen in the present paper, the use of beating trays is a viable technique for sampling ants that live and forage in shrubby environments. Available information on niche preference is still scarce for most groups of this family of insects, hampering advances on studies such as behavioral ecology. Applying beating trays as a standardized technique in sampling inventories of ants, in this particular arboreal stratum, will certainly provide useful information to boost studies in disciplines in which knowledge regarding habitat preference is needed, especially in those genera believed to be exclusively epigaeic, such as Strumigenys   . 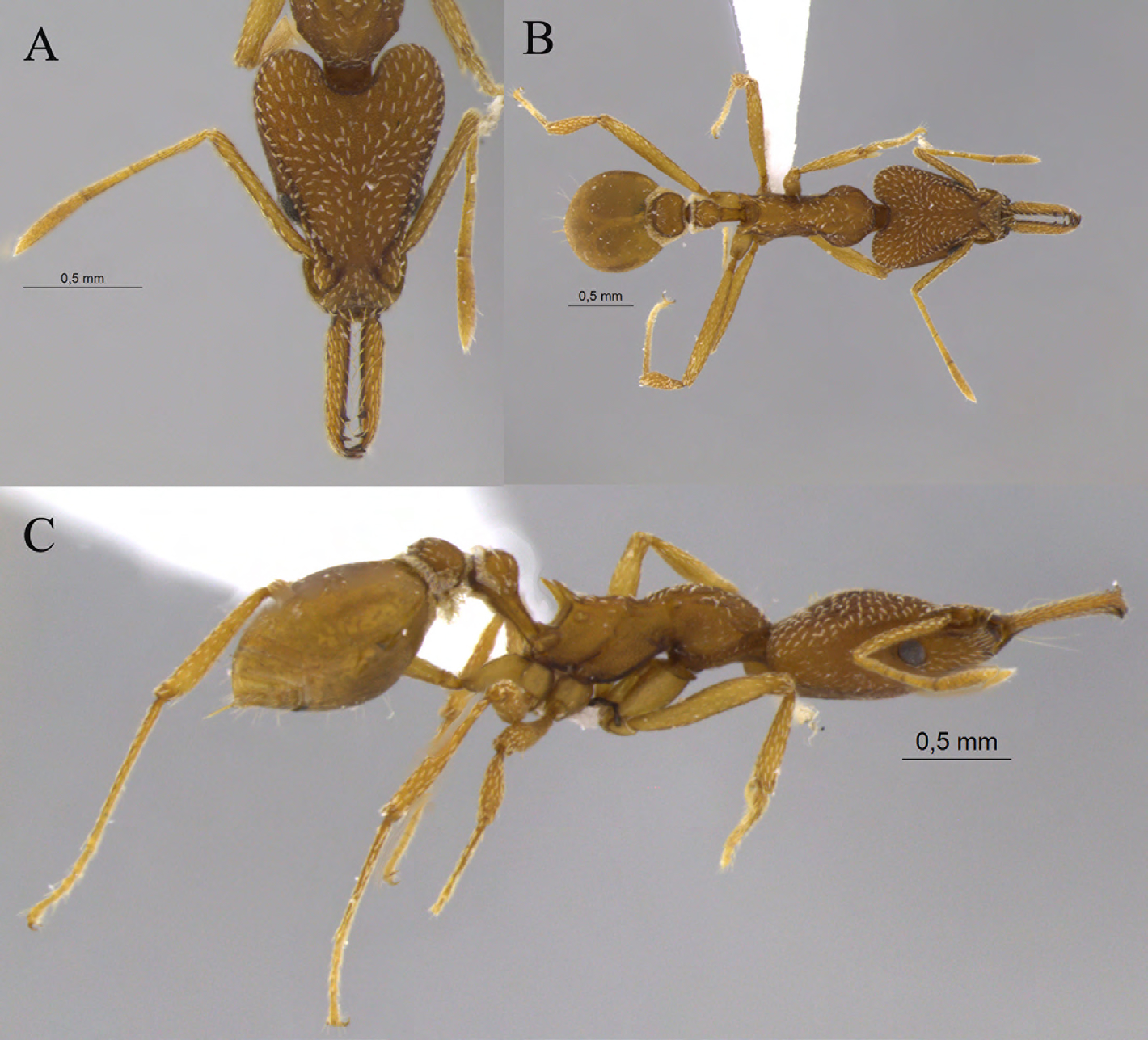 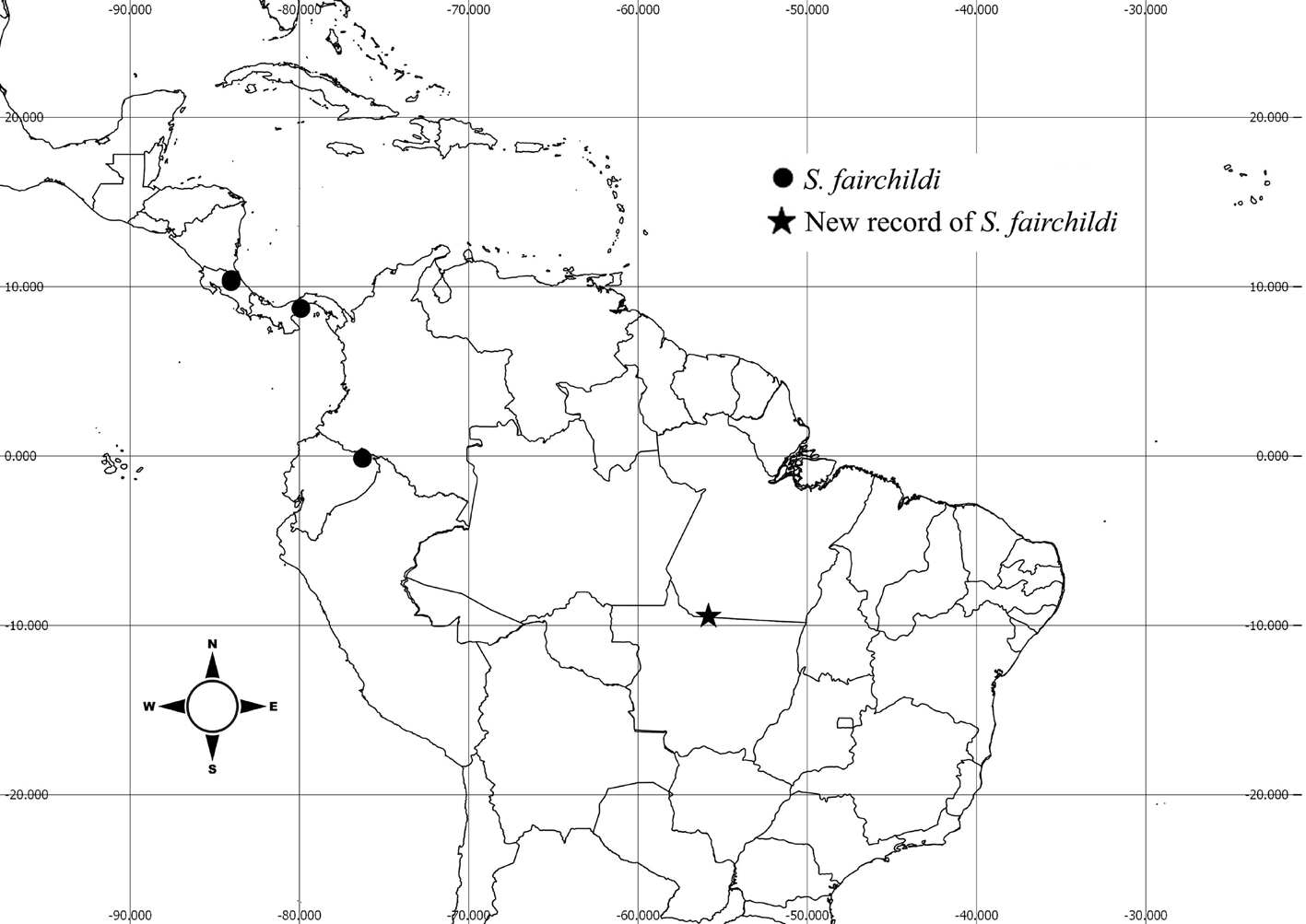