Etymology. The genus name is composed by the Latin word venator, which means “hunter”, and the suffix ellus, which is a diminutive. Therefore, Venatorellus   means “little hunter”.

Diagnosis. This new genus differs from the remaining Listroscelidini   in the following combination of features: face smooth or barely wrinkled, the wrinkles being linear and transversal; fastigium frontis and verticis narrow and rounded; mandibles symmetric; the basal portion of the tegmina is dark, devoid of a bright yellowish spot. Venatorellus   gen. nov. differs from Listroscelis Serville   in the coloration of the tegmina, which have the basal portion with a bright yellowish spot, ventral sclerite (VS) of the titillator shorter than the total width of the dorsal lobe, the two projected and free sclerites TS are closer at the base and shorter. In Cerberodon Perty   the face is strongly wrinkled, brain-like. In Monocerophora Walker   the fastigium frontis is acute and projected upwards with dorsal area black, pronotum with a transverse mark on the dorsum, and tegmina are devoid of a membranous and translucent mirror.

Description. Head. Eyes globose, located laterally, inserted at the level of the ventral margin of antennal sockets. Apex of antennal sockets in dorsal view shorter than half the length of eyes. Face very slender in frontal and lateral view. Vertex barely visible in frontal view; width six-tenths the length of the head. Frons subtriangular or oval, with a rounded projection at middle, where the defined ocellus is located. Face with surface smooth or slightly wrinkled. Mandibles with apex elongate and curved inwards, symmetric ( Figs. 1 View FIGURE 1 C and 1F). Thorax. Pronotum with anterior and posterior margins straight or slightly concave ( Figs. 1 View FIGURE 1 A and 2B). Prozona with a transverse furrow extending to the lateral lobes, not reaching the lower margin. Mesozona with a transverse furrow, extending to the lateral lobes reaching the lower margin. Metazona with a straight transverse furrow extending laterally to the lateral lobes, reaching the posterior margin. Lateral lobes with lower margin almost straight; posterior margin slightly oblique, with rounded corners and without sinus humeralis. Each sternite with two spines with rounded tips; prosternal spines comparatively slender; metasternal spines flattened or slender. Wings. Wings in both sexes fully developed. Tegmina without a bright yellowish spot at the base. Tegmina coriaceous, hind wings hyalines ( Figs. 2 View FIGURE 2 A and 2B). Legs. Hind coxae with ventral margin usually bearing one basal and one distal spine, the tip of the spines can be acute or rounded. Legs slender. Hind femora with variable length. Fore- and mid femora with a wide longitudinal furrow along the ventral surface. All femora armed with long stout spines. Fore tibiae with surface close to spines similar to the remaining surface, and a small rounded pit dorsally, below and close to each tympanal opening. Mid tibiae with six ventral spines. Hind tibiae with several spines on the dorsal and ventral margins. Genicular lobes of all legs ending in an acute tip. Tympanal openings located at the dorsal surface of the tibiae, the width of each opening about one-sixth the length; ear region conspicuously inflated.

Distribution. This genus was collected only in the Brazilian Rainforest, in Manaus, Amazonas. 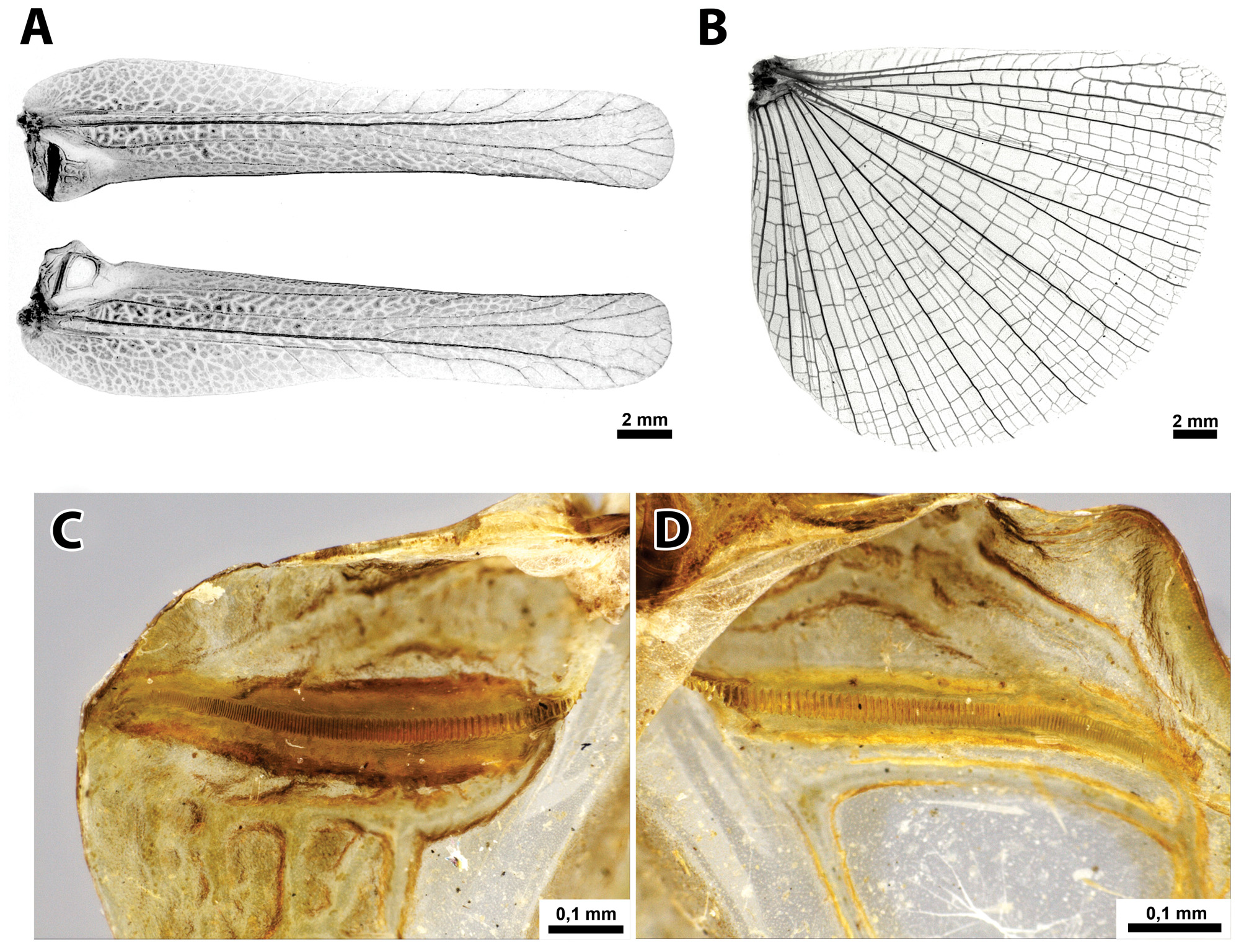 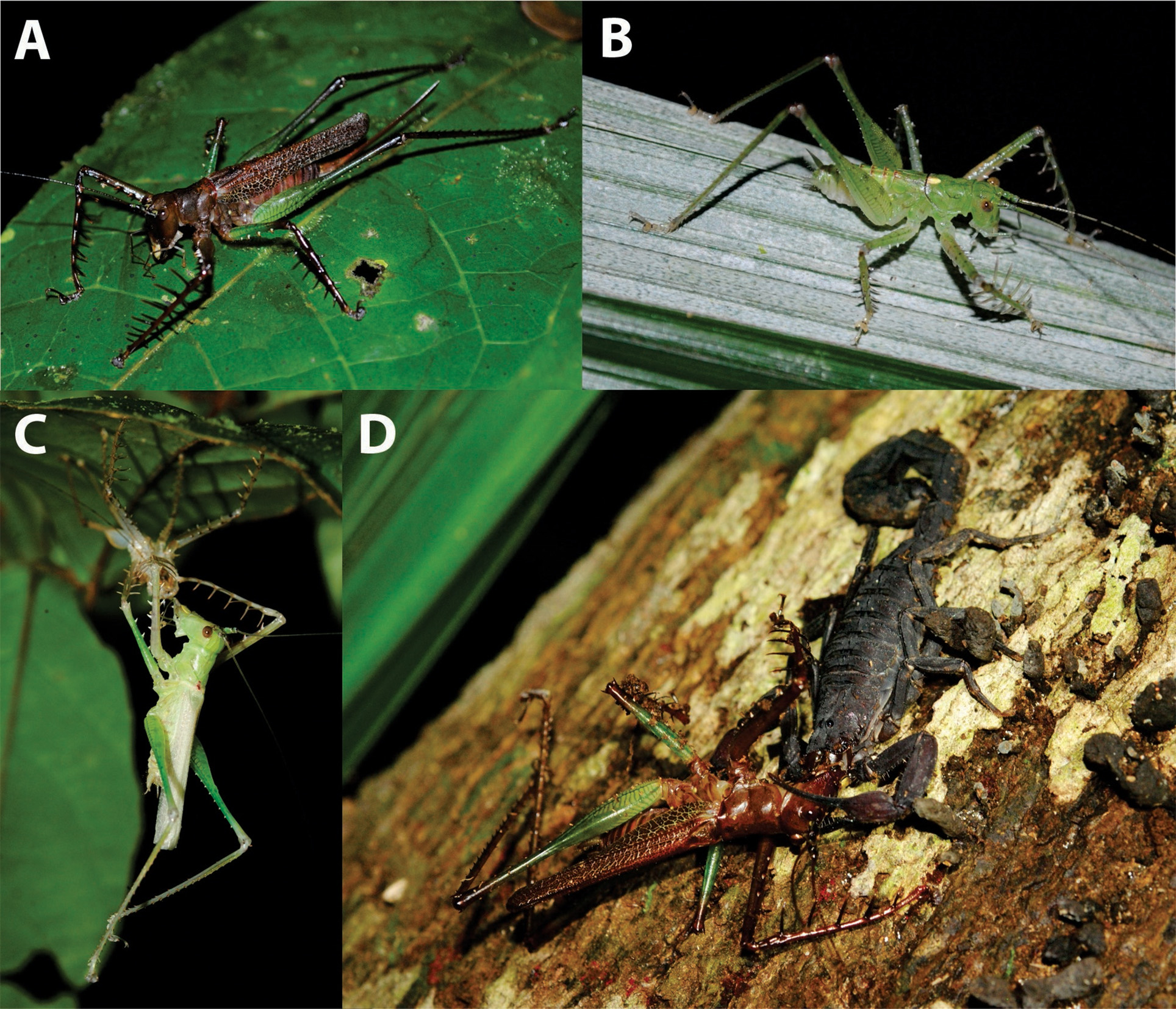