Distribution. Found in Chile from southern Araucanía Province to northern Los Lagos Province and in Argentina in southwestern Neuquén Province near the Chilean border from November to January at 100–800m ( Fig. 27View FIGURE 27).

Diagnosis. Most similar to N. pusilla  , but slightly larger, darker, with the ocellus or ocelli on the ventral side of the forewing much reduced, and without a distinct red patch over the discal cell. Postmedian band on the ventral side of the hindwing without a distinct border and maize yellow to lavender. Dark coffee striations superimposed over the entire hindwing in a ripple pattern. A distinct round yellow ocellus appears in each cell between Rs and CuA 2. Aedeagus hourglass-shaped at the distal half, the more proximal part edged in dentate projections. Proximal half of the aedeagus wide and truncate.

Redescription. Head: Antennae 7–8mm, covered in cream scales and a longitudinal stripe of chocolate to dark chocolate scales that cover half of a spatulate club. Eyes round and naked, length approximately 1.1 times width. Palps dark chocolate brown with sparse cream scales on the ventral side. Terminal palp segment oval and a little less than one-third the length of the second segment.

Thorax nearly black with iridescent black scales and covered in coffee piliform scales. Foreleg tarsi club-like and unsegmented in the males (females were unavailable for study). Midlegs and hindlegs with four rows of amber spines on the tibia and tarsus.

Forewing ( Fig. 8View FIGURE 8 E): Wingspan 26–32mm. Termen nearly straight to slightly convex and the distal end of the discal cell a shallow S-curve. Males with no visible androconial patch. Dorsal side dark chocolate brown with fringe scales in the same color. According to the original species description, females may either be plain as in the males or have indistinct red patches along the postmedian band and an ocellus that mirrors that which is found on the ventral side, presumably the M 1 -M 2 ocellus. Ventral side dark chocolate brown, M 1 -M 2 ocellus may appear as a small black dot, but may also bear a single ocellus or be ringed in rust red. Another ocellus sometimes appears between M 2 -M 3 and may be fused with the M 1 -M 2 ocellus. Apex may bear a lavender patch with dark coffee striations in a ripple pattern.

Hindwing ( Fig. 8View FIGURE 8 E): Wing trapezoidal, termen slightly convex and entire. Dorsal side and fringe scales similar in color to the forewing. Long piliform scales appear at the base and over the discal cell, extending to the median and toward the inner margin. Ventral side chocolate to dark chocolate brown with dark chocolate to dark coffee striations in a ripple pattern. Postmedian band maize yellow to lavender superimposed with dark coffee striations, without distinct borders and extending to the termen. A single small, round, maize yellow ocellus present in each cell from Rs to CuA 2.

Male Genitalia ( Fig. 17View FIGURE 17 J –L): Uncus slightly narrower at the base than at the median and narrowing to a blunt finger-like terminus. Uncus approximately 1.3 X the length of the tegumen. Gnathos acute and approximately fourtenths the length of the uncus. Pedunculus short and blunt. Saccus truncate and approximately two-thirds the length of the gnathos. Valvae widely trapezoidal at the proximal end, narrowing abruptly to one-third the width of the widest part of the valva with the distal two-thirds even in width and ending in an acute triangular terminus. Aedeagus truncate at the proximal end and wide, narrowing at the median to a little less than half the width, the distal half approximately hourglass-shaped, the more proximal part slightly wider and flanked with acute dentate projections along each lateral edge.

Etymology. Hayward named this species after Sergio Schajovskoi  , who collected the holotype and paratypes in 1952. 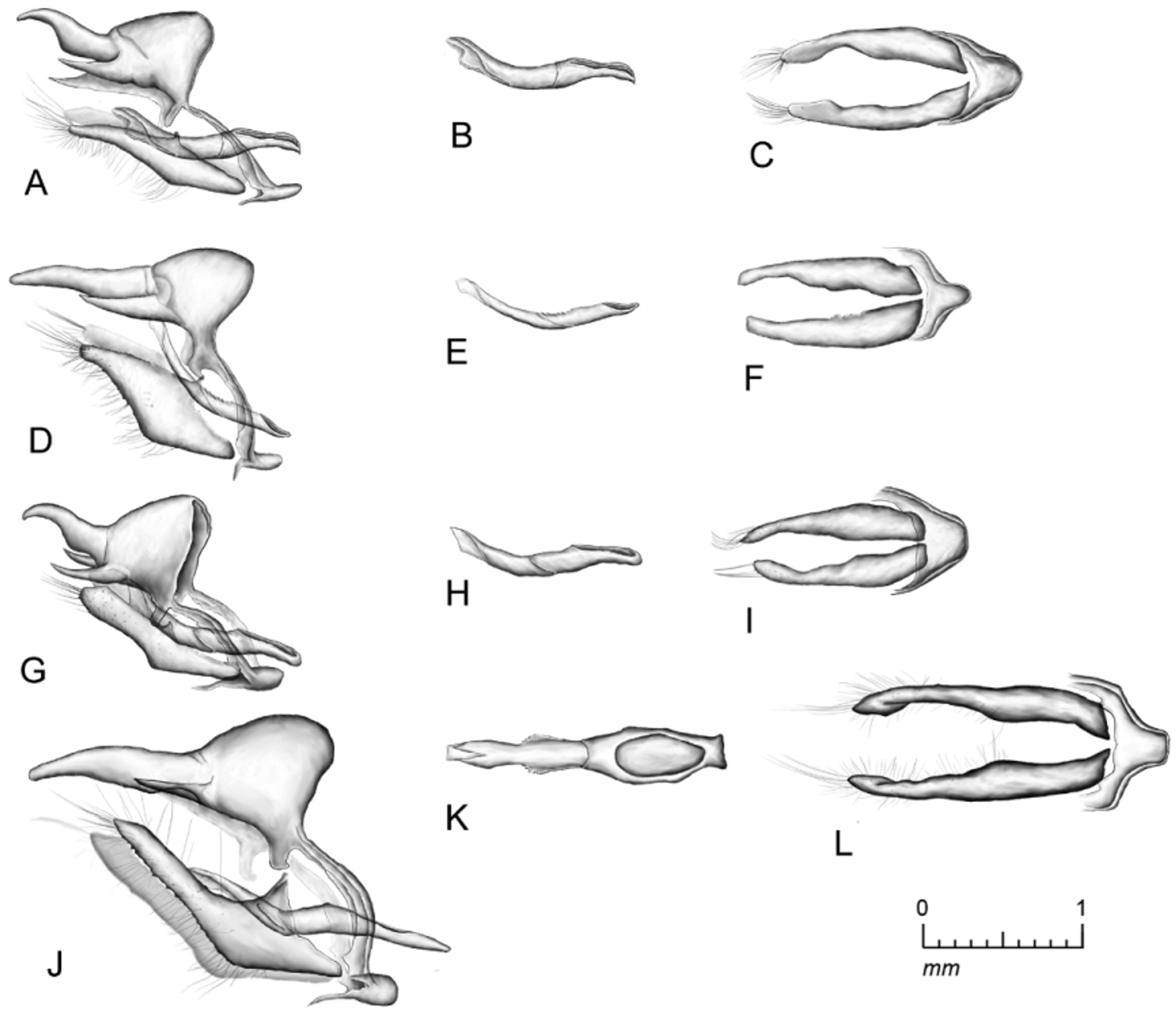