Diagnosis. Ancistrus verecundus is easily distinguished from all congeners, except A. jataiensis , A. parecis , A. reisi , and A. tombador by the absence of an adipose fin which is replaced by a series of 3 to 5 median, unpaired platelets forming a low postdorsal ridge. Ancistrus verecundus differs from all congeners lacking an adipose fin, except for A. tombador , by the naked margin of snout broad and the reduced development of snout tentacles in both sexes (usually absent), and by the presence of two or more plates of the dorsal plate series between the end of the postdorsal ridge and the origin of the first dorsal procurrent caudal-fin spine ( Fig. 4a View Fig ) (vs. one or none). Ancistrus verecundus is distinguished from A. tombador by the head depth at supraoccipital (17.9-19.3 vs. 15.6-16.9% SL), cleithral width (31.4-33.1 vs. 27.5-31.2% SL), interorbital width (15.9-16.8 vs. 12.7-15.1% SL), and by the base of the first anal-fin pterygiophore covered by skin (vs. exposed).

Supraoccipital with margins between surrounding bones and plates usually not clearly visible. Nuchal plate small and curved. Five series of lateral plates; mid-dorsal, and mid-ventral series ending at level of end of series of platelets replacing adipose fin. Last plate in median series rarely smaller than penultimate plate. Odontodes present on body plates except along dorsal-fin base, and on widely extended area below anal fin; odontodes generally short, only very slightly longer on ventral margin of opercle and on pectoral-fin spine of males. Abdomen entirely devoid of plates. Base of first anal-fin pterygiophore covered by skin (without preanal platelet-like element).

Distribution. Ancistrus verecundus was collected in a small river of the upper rio Madeira basin, in the state of Rondônia, Brazil ( Fig. 1 View Fig ).

Etymology. From Latin, verecundus , meaning bashful, modest, in allusion to the absence or reduced development of tentacles on the snout. 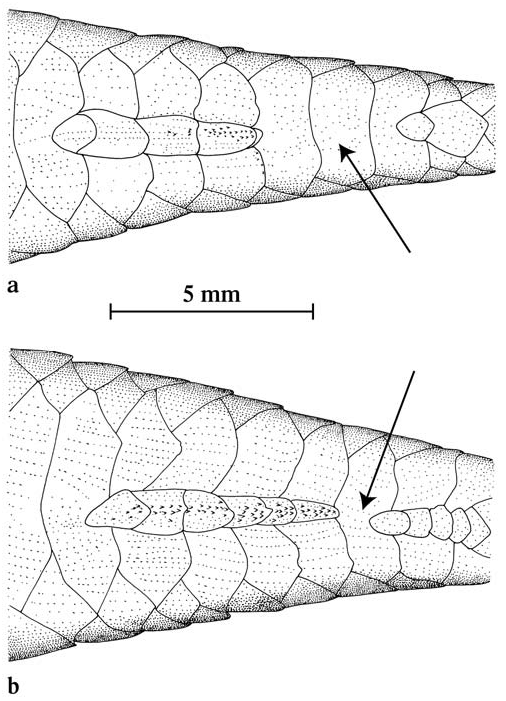 Fig. 4. Dorsal view of caudal peduncle in (a) Ancistrus verecundus, MCP 35573, paratype, 54.6 mm SL and (b) Ancistrus parecis, MCP 35570, holotype, 59.5 mm SL.Arrows indicate dermal plates of dorsal series of plates between the end of postdorsal ridge and the origin of the first plate-like procurrent caudal-fin ray.