Diagnosis. This species can be distinguished from all other Acrotaphus by the combination of the following characters: 1) margin of gena behind eyes convex in dorsal view; 2) margin of gena 0.6–0.7× length of eye in dorsal view; 3) posterior ocelli separated from eyes by 0.6–0.8× its diameter in dorsal view; 4) metasoma orange with posterolateral margin of tergites II–V slightly black and tergites VI+ black; 5) hind leg orange, with apex of coxa, femur, tibia and tarsus black; 6) ovipositor 1.0–1.4× as long as hind tibia.

Description. Female. Body [9.8] 7.0–10.0 mm. Head. Lower face [0.6] 0.6–0.8× as broad as high (from supraclypeal suture to base of antenna), flat, with scattered punctures which bear long conspicuous bristles; head, in dorsal view, with margin of the gena convex behind the eyes; margin of gena [0.7] 0.6–0.7× length of eye in dorsal view; posterior ocelli separated from eyes by [0.7] 0.6–0.7× its diameter in dorsal view. Mesosoma. Pronotum moderately long, smooth and polished, with distance from tegula to head greater than [0.6] 0.4–0.6× distance from tegula to hind margin of propodeum; mesoscutum smooth and polished, with notaulus weakly marked; scutellum in dorsal view, triangular; mesopleuron polished, with fine bristles anteriorly and ventrally; epicnemial carina present ventrally, extending until reaching the level of the lower corner of the pronotum laterally; metapleuron polished, with sparse, fine bristles evenly spaced and with a strongly longitudinal groove in lower part below spiracle; propodeum smooth dorsally, laterally with scattered fine bristles. Fore wing [8.0] 6.5–8.0 mm; cu-a opposite to the base of Rs&M; 2 rs-m [0.6] 0.4–0.6× as long as abscissa of M between 2 rs-m and 2 m-cu; hind wing with abscissa of Cu 1 between M and cu-a [1.1] 0.8–1.1× length of cu-a. Tarsal claw with basal lobe quadrangular, with claw apex slightly overtaking the posterior margin of lobe. Metasoma. Tergite I [1.4] 1.3–1.4× as long as posteriorly broad; tergite II [1.1] 1.0–1.2× as long as posteriorly broad; tergite III [1.15] 0.9–1.15× as long as posteriorly broad; tergites IV–V [1.0] 0.9–1.1× as long as posteriorly broad; ovipositor robust, [1.4] 1.0–1.4× as long as hind tibia; lower valve with slightly swelling in the base and mid region.

Male. ( Figs 31–32 View FIGURES 28–37 ). Similar to female in structure and coloration, except body 7.0–9.0 mm; lower face 1.0–1.1× as broad as high (from supraclypeal suture to base of antenna); head in dorsal view with margin of gena convex behind eyes; margin of gena 0.6× length of eye in dorsal view; posterior ocelli separated from eyes by 0.5–0.6× its diameter in dorsal view; fore wing 5.5–7.0 mm; tergite I 1.4–1.75× as long as posteriorly broad; tergite II 1.2–1.3× as long as posteriorly broad; tergite III 1.2–1.3× as long as posteriorly broad; sternite IX ( Fig 34 View FIGURES 28–37 ) longer than high, with lateral and anterior margins strongly sclerotised, lateral margin flat and posterior margin concave centrally, with a few bristles widely spaced posteriorly. Genital capsule ( Figs 35–36 View FIGURES 28–37 ): Paramere truncated apically, slightly narrower than the parameral lamina, with bristles except in posterior margin; volsellar lamina with spaced bristles laterally and apically, except in the median and posterior regions and inner margin and posterior part and with a set of about four bristles in anterolateral region, just below the base of the digitus; cuspis robust with about five to six teeth aligned in the mid part until apex and with some small bristles in basal region and spaced laterally in apical regions; digitus with teeth on apex, rounded distally and angular ventrally, with the margins of the apical region narrower than base; aedeagus with small teeth on apex and its apex slightly curved downward in lateral view.

Variation. Some specimens have the clypeus entirely black, and hind coxa entirely orange and hind femur black, except base orange. Note: We are not entirely sure of the association of males with females, so we are not treating them as paratypes. 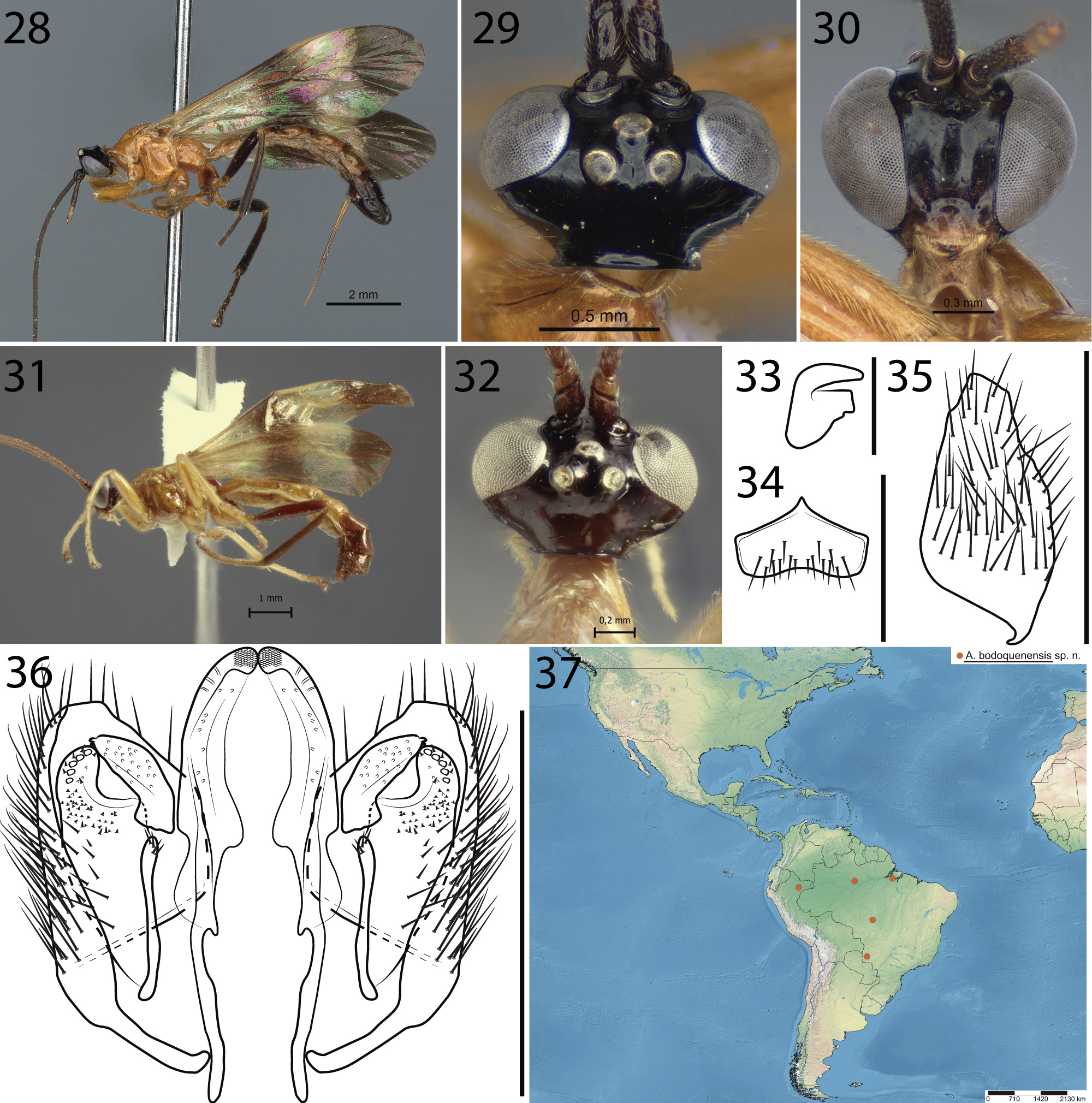