Diagnostic characters:— Oxalis carolina   is morphologically most similar to O. tomentosa   from the SW Cape. In addition to a clear geographic gap between the distributional ranges of these two species, O. carolina   is a more robust plant, with longer petioles and fewer, but larger leaflets (mostly 9–11 compared to 10–20 in O. tomentosa   ). Another distinct feature of O. carolina   is the presence of recurved sepal tips ( Table 1, Fig. 1 View FIGURE 1 ). In addition, O. tomentosa   has a pubescent corolla tube, while the corolla tube of O. carolina   is glabrous. Despite morphological similarities, O. carolina   can hardly be regarded as a recent autopolyploid derivative of the diploid O. tomentosa   , because their monoploid genome sizes differ by ca. 10% (1Cx-values for O. carolina   and O. tomentosa   are 0.29 pg and 0.32 pg, respectively). Nonetheless, detailed molecular work is required to accurately identify progenitors of the new species. Oxalis palmifrons T.M. Salter (1936: 161)   and O. saltusbelli   are two other multifoliolate species found in the Northern Cape Province. The former is easily recognized by very numerous leaves with more than 20 leaflets and markedly compressed petioles. The recently described O. saltusbelli   from the Nieuwoudtville area has uniquely grooved petioles, its mature leaflets are narrower and indumentum is sparser and softer than that of O. carolina   ( Table 1). Other potentially sympatric multifoliolate species (e.g., O. zeyheri Sonder   in Harvey & Sonder (1860: 347)) are prominently caulescent and thus easy to distinguish from O. carolina   .

Distribution and ecology: — Oxalis carolina   grows on southwest-facing slopes above the road R357 north of Nieuwoudtville, in open Hantam Karoo vegetation ( Fig. 2 View FIGURE 2 ). Other Oxalis species   recorded at this locality include O. callosa R. Knuth (1927: 15)   , O. flava   , O. obtusa   and O. suteroides T.M. Salter (1935: 116)   . The slope is very stony and the long rhizome of O. carolina   appears to be an adaptation to these conditions. Bulbs are deeply-seated in loamy soil and were often found below boulders or in crevices between stones. A regular sympatric occurrence of mosses indicates enough moisture during the growth season. Oxalis carolina   generally favours shaded microsites, sheltered either by boulders or by surrounding shrubby vegetation, and the species is exposed to direct sunlight only occasionally and for short periods. The size of the population was estimated at a few hundred individuals. Plants often grow aggregated into clumps. Only a small proportion of individuals were flowering (and flowers were seldom fully open), while most plants produced only leaves. The palmately compound leaves superficially resemble some multifoliolate Lupinus   ( Fabaceae   ) species. Vegetative reproduction via bulbils seems to be the prevailing mode of propagation; bulbils are especially common along the rhizome in autumn. Although it is possible that other populations of O. carolina   occur in the area, our repeated searches during 2011–2012 in localities with similar ecological conditions were not successful.

Phenology: —The species flowers from mid-May to late June.

Genome size: —The mean 2C-value was estimated to be 1.16 pg, showing the new species to be tetraploid. The amount of nuclear DNA is very different from the closest relatives of O. carolina   (i.e., O. oligophylla T.M. Salter (1938: 114)   , O. palmifrons   , O. saltusbelli   and O. tomentosa   ), all of which are uniformly diploid according to flow cytometric analysis ( Fig. 5B View FIGURE 5 ); another related species, O. hygrophila Dreyer (2004: 262)   , seems to be hexaploid on the basis of genome size data.

Conservation status: —The species is known from only one very localized population consisting of a few hundred individuals. Because the population occurs close to the road verge, it may be threatened by possible future road construction. This species would qualify as Vulnerable under South African Red List Criteria ( Raimondo et al. 2009), due to a geographic range of less than 20 km 2 and only one known population (Criterion D).

Etymology: —The specific epithet honours the Charles University in Prague (Universitas Carolina Pragensis), which is the oldest university in Central Europe and Alma Mater   of the first three authors. 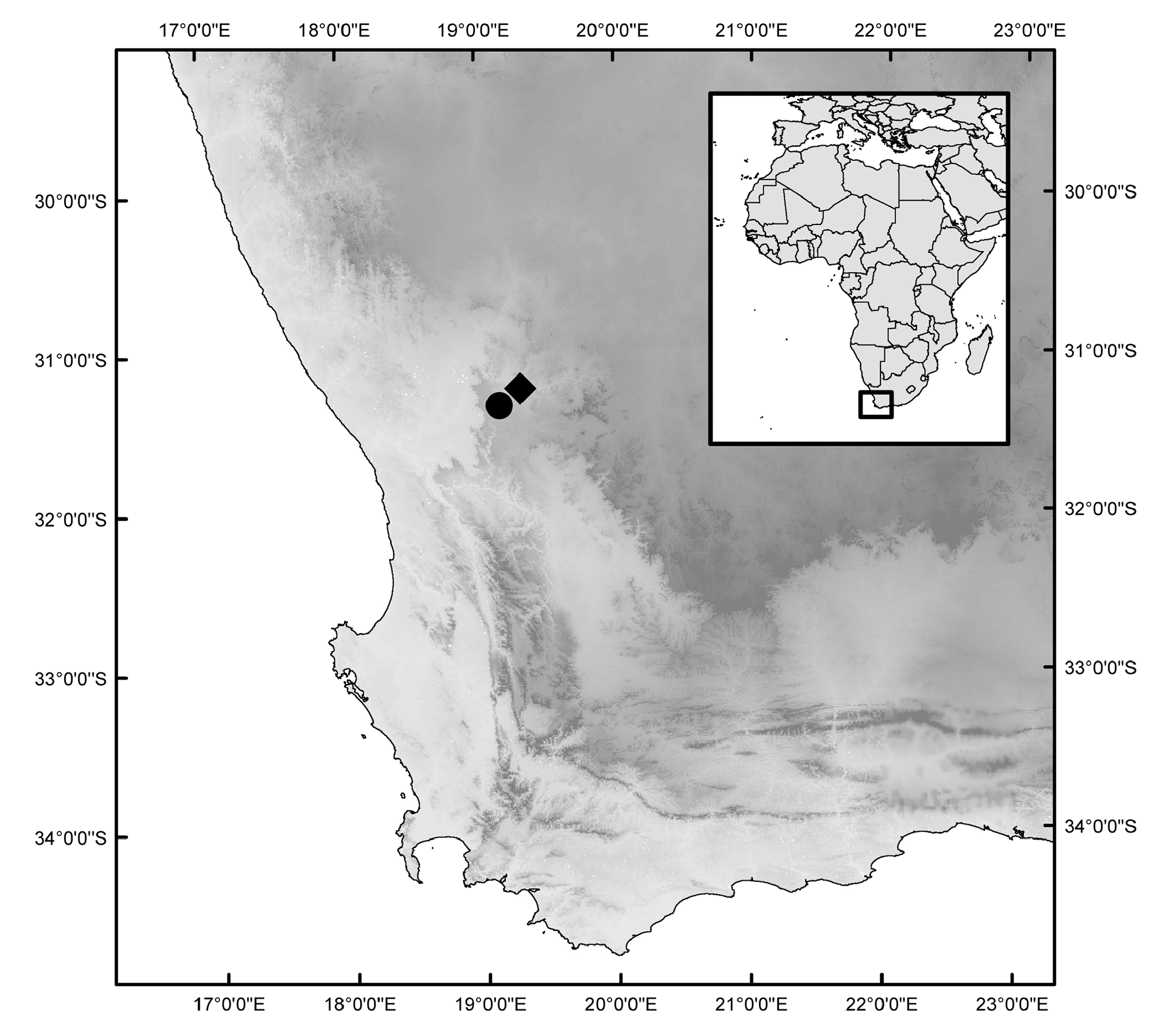 FIGURE 3. Phylogenetic placement of a) Oxalis carolina based on ITS and trnL-trnL-trnF sequence data; and b) O. filifoliolata based on ITS sequence data. All trees presented are Bayesian 50% majority-rule consensus trees. Numbers below the branches indicate Bayesian Posterior Probability values, numbers above the branches refer to Parsimony Bootstrap values. The new taxa are highlighted in larger, bold font. The shading in a) indicates the O. tomentosa alliance. 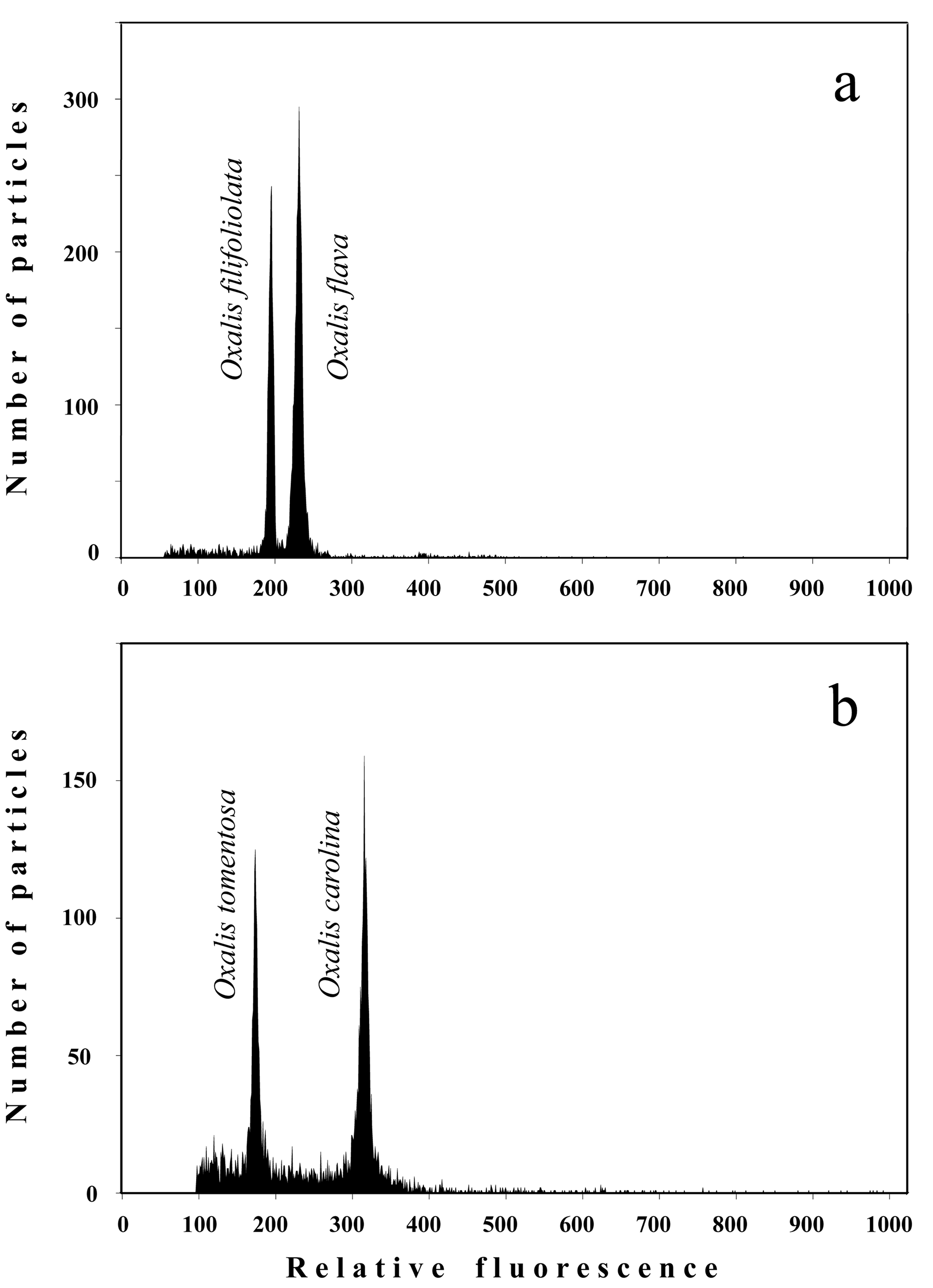