Description. Irregularly massive growth form, somewhat rounded. Observed specimens about 30 to 45 mm in diameter by a thickness of about 15 mm. Color alive ( Fig. 8 View FIGURE 8 A) bright yellow, in ethanol brown. Sponge firm, only slightly compressible. Ectosome soft to the touch, not separable from the choanosome. Surface dense, folded into several amorphous conules, these about 1 mm in height. Sponge has overgrown several bryozoans, these present in abundance throughout the whole sponge. Also, stones and other foreign material incorporated into sponge tissue.

Skeleton: Because of the sponges’ texture and the arrangement of spicules, it is very difficult to make good skeletal preparations. Thus, information on skeletal features of observed sponges is scarce, despite a good number of preparations. Spicular arrangement irregular, basis showing tracts of smooth styles, running generally towards the apical sponge surface. These tracts either thick and dense, or very disorganized ( Fig. 8 View FIGURE 8 B). Additionally, a large amount of free spicules, styles as well as acanthostyles, present within the tissue. Tracts accompanied by acanthostyles, often arranged in very characteristic star-like patterns. Ectosomal skeleton made up of a dense arrangement of tornotes parallel to the outer surface, these arranged as thick tracts or even crusts ( Fig. 8 View FIGURE 8 C).

Remarks. The genus Myxodoryx has a remarkable distribution. The type species M. hanitschi is so far endemic for the Antarctic (Campos et al. 2007 b), but a second species has been described from Japanese waters, including Sagami Bay. This is Myxodoryx jogashimensis Tanita and Hoshino, 1989 . These two species are the only ones so far assigned to Myxodoryx . Thus, the occurrence of the genus in these two areas which are significantly separated from each other, points towards a historic connection between the sponge faunas of the Antarctic, namely the Weddell Sea, and the Pacific Japanese waters. Such a connection between these two distant faunas has already been indicated in an earlier study on the hexactinellid sponges from SYSTCO I (Göcke & Janussen, 2011), where the occurrence of the rare genus Lonchiphora Ijima, 1927 , family Farreidae , in both the Sagami bay and the Weddell Sea was shown. The phylogenetic position of the Antarctic Lonchiphora species was furthermore confirmed by molecular results (Dohrmann et al. 2011). Like Myxodoryx , Lonchiphora is represented in the two areas by different species, which are the only ones belonging to that genus. A possible explanation of this faunal relation between the two separate regions on the basis of historical changes in sea currents due to continental drift is given by Göcke and Janussen (2011). It has to be pointed out though, that there are some strong differences between the two Myxodoryx -species, as M. jogashimensis shows a branching growth and has no smooth styles (Tanita & Hoshino 1989), which form the basal skeleton in M. hanitschi . Thus the assignment of these two species to the same genus has to be considered as doubtful, until distinct molecular analysis has proved or disproved the relationship between them. 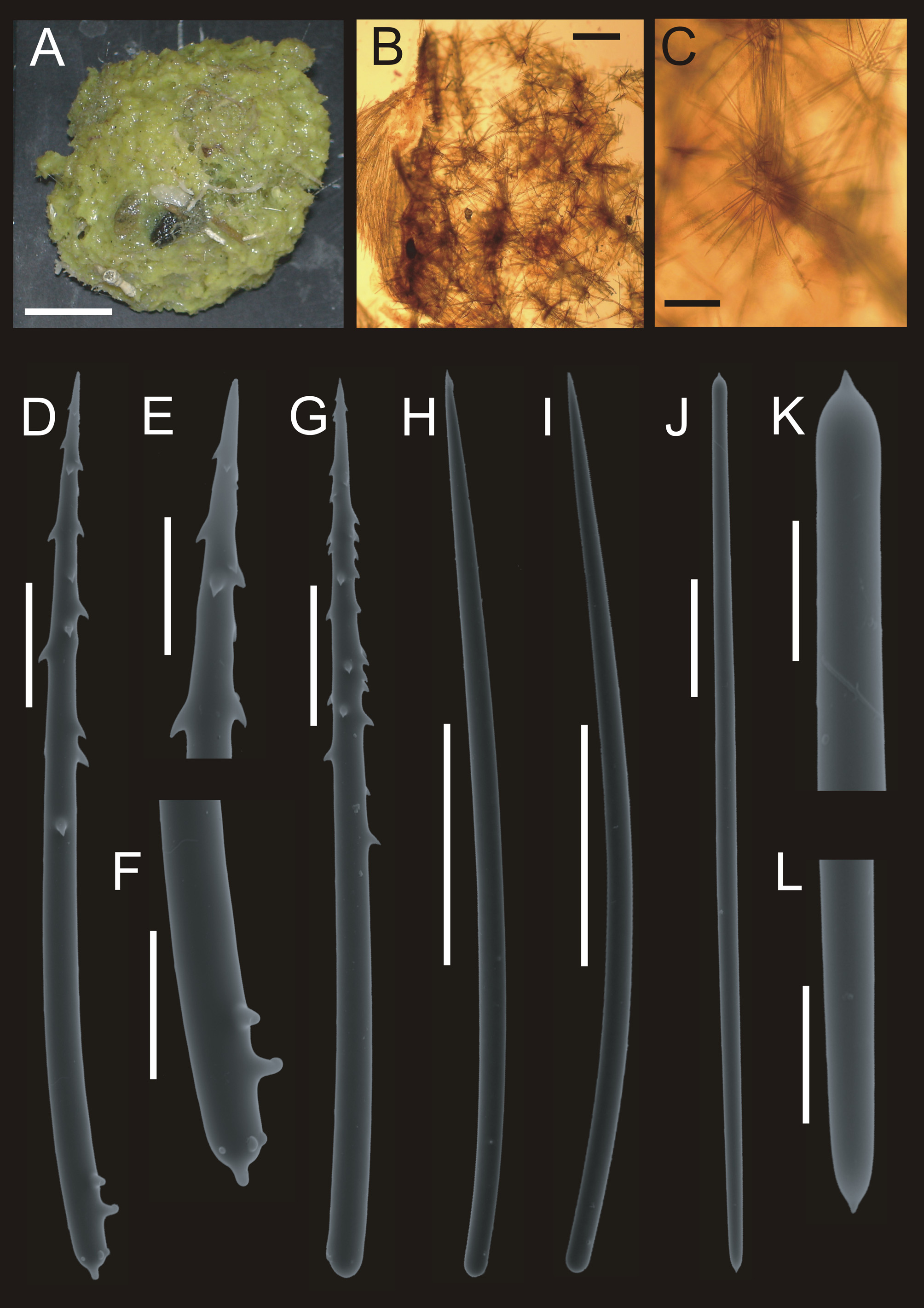