Description. Sponge rounded, brownish with a porous surface. Skeleton consisting of an anisotropic reticulum of styles, with main fibres oriented towards the surface. Ectosomal skeleton a tangential crust of tornotes. In parts tornotes seem to be arranged in bouquets, echinating the dermis (but this might be due to bad preservation or the process of preparation). Microscleres free within the choanosome. Soft tissue well organized with distinct rounded pores and aquiferous canals throughout the body. Main spicules simple styles 570–615 x 20 µm, ectosomal megascleres tornotes with distinct tips at each end, 310–325 x 10 µm. Microscleres numerous sigmas, 80–110 µm, and relatively rare arcuate isochelae, about 35 µm long.

Remarks. There are several similarities of our specimen with the species L. (L.) styloderma   , as was described by Hentschel (1914), but there are also several dissimilarities. First of all, he reports no sigmas, but these are very numerous in our specimen. As sigmas occur very widely and often in strongly variable quantities, this point might be neglected, although it should not be forgotten completely. Another point is concerning the styles: in Hentschel's (1914) specimen these bear small spines at the rounded end, which are absent in our specimen. Also this character might be of a minor significance. Hentschel (1914) called the ectosomal spicules in L. (L.) styloderma   “slender styles”, Koltun (1964) furthermore stated, that the species is distinguished from all other species of the genus by its dermal monactines. Still, when looking at Hentschel's (1914) figures, one sees a megasclere with two pointed ends, the one end being a bit thickened just before its tip. Thus, the sclere figured by Hentschel (1914), which can hardly be called a regular style, very much resembles the dermal spicules present in our sponge which we call tornotes (above). Koltun (1964) unfortunately gave no figures of the spicules he observed. Thus, the difference in this point seems questionable, furthermore a re-examination of the type seems necessary, in order to arrive at a valid description and diagnosis of the species. Apart from the spicules, the growth form of the sponges also shows differences between our specimen and the type: while our sponge is massive (though fragmentary), specimens of Hentschel (1914) and Koltun (1964) were small and distinctly tube-shaped. Summarizing, our sponge shows distinct similarities to Hentschel's (1914) L. (L.) styloderma   , but the dissimilarities present are so strong that we cannot assign it to this species without doubt. The similarities, however, are too significant to try another allocation or even describe it as a new species. 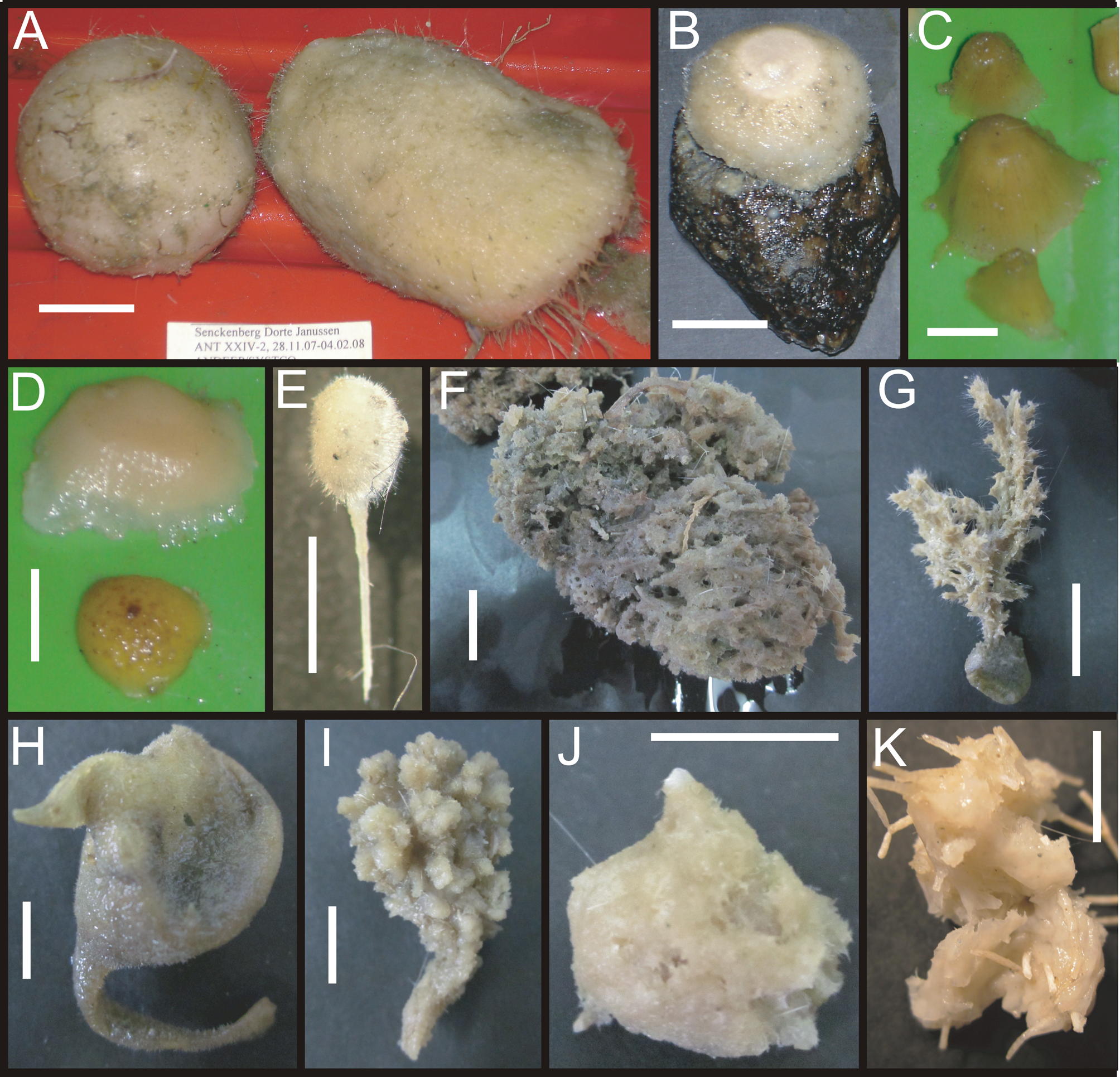