Recognised in the genus Maesa   by the combination of the following characters: scrambling habit, entire leaf margins and most parts conspicuously pubescent with striking, ginger-brown hairs together with scales, leaves drying dark sage-green adaxially and reddish brown abaxially, and cladodromous–eucamptodromus venation.

Distribution and ecology:— This species is currently known only from the type collection from Milne Bay Province, Papua New Guinea. The plant was found in rainforest at c. 700 m (fide Brass 1956: 133).

Etymology:— The epithet honours Leonard John Brass (1900–1971), an Australian-American botanist who collected the type specimen of this new species. He participated in several important expeditions to New Guinea, especially as the plant collector for the Archbold Expeditions, and collected many thousand specimens valuable for the study of New Guinea flora (c. 35,000 numbers – see Perry 1971).

Notes:— Maesa brassii   is distinguished by its scrambling habit, being conspicuously hairy throughout with striking, ginger-brown hairs, entire leaf margins, and leaves drying dark sage-green adaxially and reddish brown abaxially. The indumentum of this species comprises both hairs of varying lengths and scales; the shortest hirsutellous hairs are found on the margins of the calyx lobes, while the longer hairs, giving a pilose appearance, cover almost all parts of the plant. The venation is quite distinct – the secondary veins branch quite early, usually just after halfway between the midrib and margin, and then diminish without clearly looping and joining and forming prominent marginal loops, somewhere between the cladodromus and eucamptodromus states of Hickey (1979).

From the key to the species provided by Sleumer (1987), M. brassii   would key out to M. rufovillosa   based on the combination of pentamerous flowers, pubescent leaves and the racemose, many-flowered inflorescences and, indeed, this collection was included within cited specimens of M. rufovillosa   in Sleumer’s revision. Utteridge (2013: 684) discussed how Sleumer’s concept of M. rufovillosa   was rather muddled and included a mixture of scrambling (‘climbing’) and shrubby/tree species, as well as species from primary or secondary habitats. With the description of M. brassii   here, and the resurrection of M. ruficaulis   from M. rufovillosa   in Utteridge (2013), the limits of latter species are now more clearly defined: the sub-coriaceous leaves, drying dark sage-green adaxially and reddish brown abaxially, and the entire leaf margins make M. brassii   very distinctive and easily separated from M. rufovillosa   , which has chartaceous leaves with serrate margins, usually drying dark brown above and pale sandy-brown below and hispid hairs. Both species are found in rainforest, but M. rufovillosa   seems to be scattered in lowland localities mostly near the coast. Unfortunately, there is currently only one collection of M. brassii   making it difficult to determine the distribution and ecology of this species. Whilst there is no detailed label information, Brass (1956: 133) states his collections on this date were made from a camp at 700 m in a mixture of primary and secondary habitats at the junction between lowland rain forest and oak montane forests. More collecting is needed in the Owen Stanley Range in Papua New Guinea to better understand the ecology of M. brassii   . 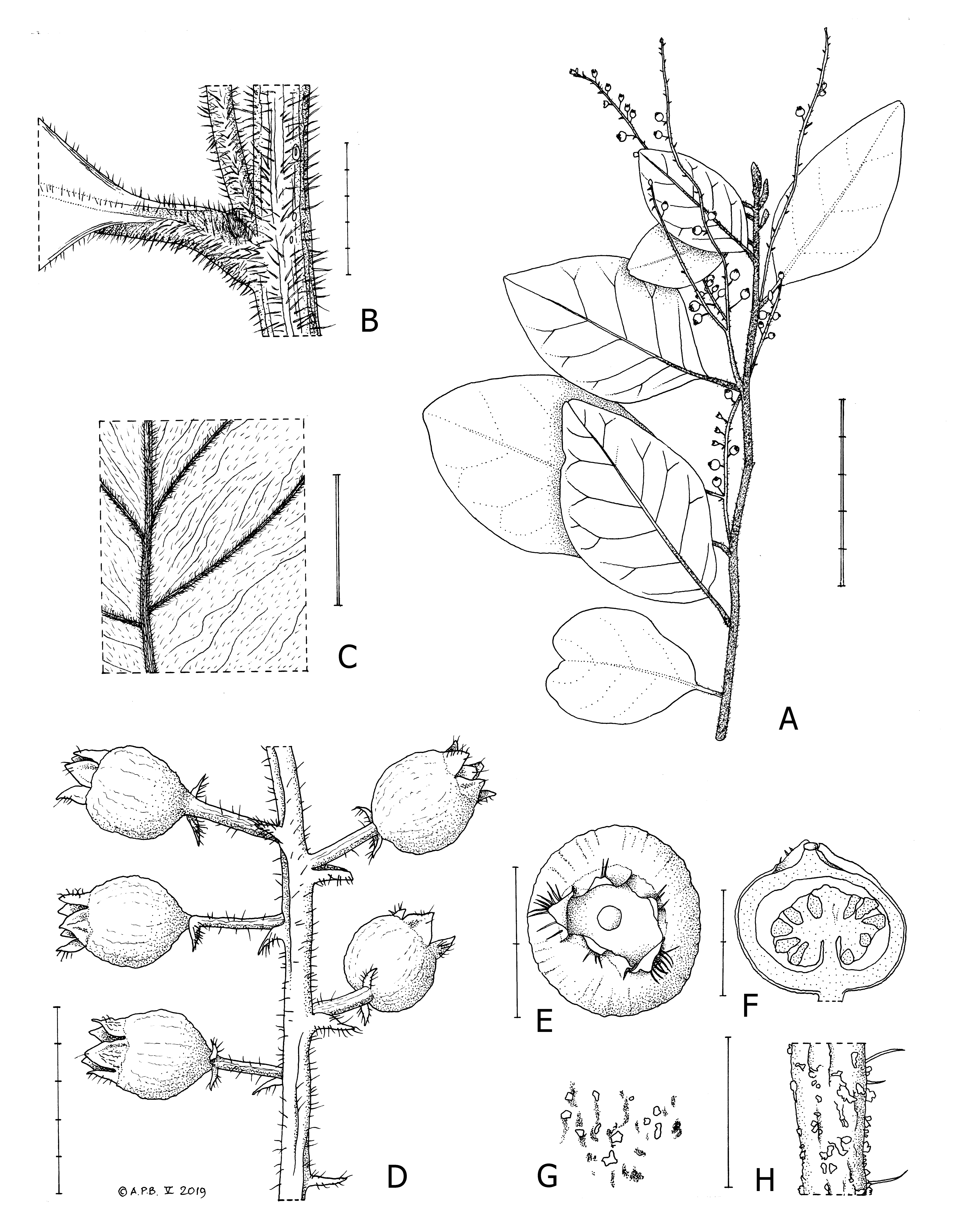