Sculpture: Head anterior to dorsal impression with deep punctures separated by a distance about 1 ½ equal to their own diameters, and a few sparse, minute punctures; interspaces smooth and shiny, densely and very coarsely punctuate and microreticulate along hind edge and along hind edge on a strip along the large eyes, and in two shallow depressions medially from indistinct swellings above the antennae.

Elytron with dual irregular punctation similar to that of pronotum but more dense, surface somewhat uneven especially near middle where punctures are larger, near tip they are fine. Smaller punctures at apical third of elytra very sparsely and hardly visible. Epipleura simple, distally narrowed, disappears in distal fourth with dense, more or less contiguous punctures.

Ventral surface with punctures similar in than those of dorsal surface, denser and more irregular with surfaces of sclerites irregularly rugose; punctures of metacoxal plate and sterna 1 and 2 not evidently larger than those elsewhere on ventral surface; metasternum medially and metacoxa between metacoxal lines coarsely and sparsely punctate. Legs with femora, tibiae, and dorsal surface of metatarsomeres 1–3 strongly punctate.

Elytra together elongate-oval with point of maximum width in apical third, sides converging basally; disc of each elytron with a medial and a sublateral, broad, longitudinal groove each bearing a row of serial punctures, and a less evidently defined lateral groove adjacent to lateral margin; medial and sublateral groove beginning approximately opposite basolateral impression of pronotum, sharply defined on basal three-fourths, becoming shallower apically.

Etymology: The species is dedicated to Dr Inna Borodavko, the mother in law of the senior author.

Habitat: A rheophilic species collected from rivers and creeks with riffle habitats, and with both cobble and boulder substratum and fringed by forest. According to an unpublished report from 1976, deposited in the Victorian Museum in Melbourne, the Wentworth River bed at this site…“is approximately 10–15 m wide. Dry sclerophyll forest predominates on steep surrounding slopes, whilst the land adjacent to the river suggests that after clearing, uncontrolled regrowth was permitted. Soil erosion and fire damage are evident. Along the river banks tussock vegetation is interspersed with thickets of burgan ( Leptospermum phylicoides   ), tall grass and blackberry. Substratum is largely loose and made up of pebbles and cobbles on gravel. Current varies from slow to fast, and depth from 10 to 30 cm in autumn, to 40 to 60 cm in spring. Flow comparatively laminar”. An intensive survey by the senior author at the second locality at junction of the Thomson and Abberfeldy Rivers ( Figs 34, 35 View FIGURES 30–35 ) in November 2006 revealed no further specimens. 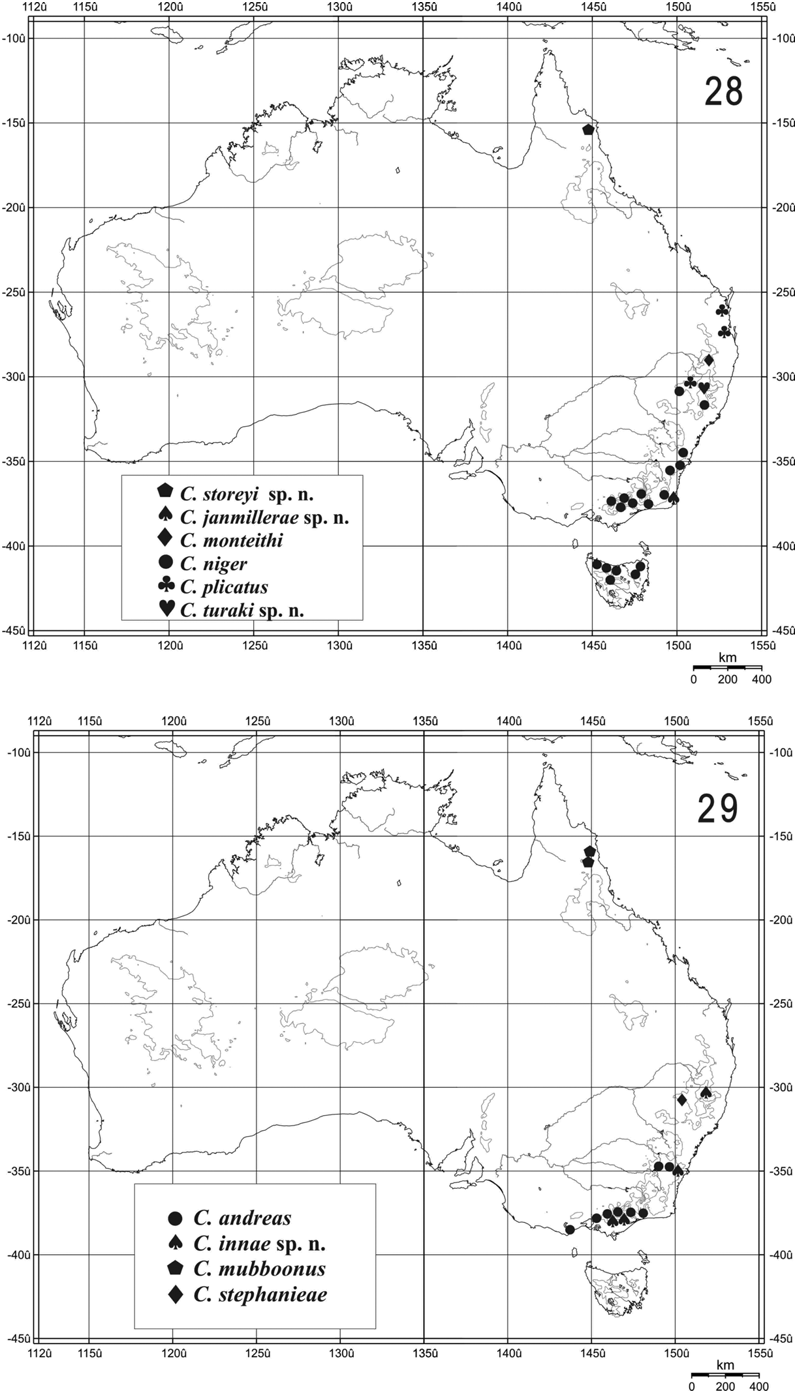 FIGURES 28–29. Distribution of the genus Carabhydrus in Australia.