Etymology: From the Greek, lophia , for crest or ridge, referring to the longitudinal carina along the ventrolateral side of the second segment of the antennal peduncle. The name may be considered as a noun in apposition.

Description: Carapace as long as broad, excluding rostrum. Dorsal surface covered with minute spinules, with some scattered small spines and short uniramous setae. Gastric region distinctly separate from hepatic area, metagastric region well-defined; two small epigastric spines behind supraocular spines, and a median row of three well-developed spines, with the first thicker than the others. Cervical groove distinct. Cardiac region circumscribed, feebly convex, with a median row of three well-developed spines, and with the first thicker than the others. Anterior branchial region slightly separated from posterior branchial region. Frontal margin concave behind eye. Lateral margins convex, with some spines and iridescent setae on anterior half. Anterolateral spine short, reaching sinus between the rostral and the supraocular spines ( Fig. 6A View Figure 6 ). Rostral spine spiniform, with thin, dorsal longitudinal carinae; supraocular spines well-developed and half as long as, and more slender than, rostrum ( Fig. 6B View Figure 6 ). Lateral margins with some uniramous iridescent setae and some plumose non-iridescent setae.

Eye large: maximum corneal diameter about 0.3 times the distance between the bases of the external orbital spines.

With Mxp 3 ischium about 1.5 times the length of the merus, measured along the dorsal margin, and bearing a spine distoventrally; merus with median, well-developed spine on flexor margin; extensor margin unarmed ( Fig. 6E View Figure 6 ).

With P1 long and slender, between four and five times the carapace length, squamate, with some uniramous iridescent setae and some plumose noniridescent setae, more dense along mesial margins. Mesial margins of merus, carpus, and palm with some small spines and acute scales. Carpus more than five times longer than high. Palm as long as the carpus, and 1.4–1.5 times the length of the fingers ( Fig. 6F View Figure 6 ).

Remarks: The new species is close to Paramunida salai sp. nov. from the Solomon Islands (see below), and to Paramunida belone Macpherson, 1993 from New Caledonia, Futuna, Fiji, Tonga, and the Bali Sea ( Macpherson, 1993, 2004; Baba, 2005). The three species are characterized by having a rostral spine that is larger than the supraocular spines, the thoracic sternites with a few arcuate striae, and the distomesial spine on the second antennal segment mucronated and reaching, or overreaching, the end of the fourth article.

The differences among the three species are provided in the Remarks section of P. salai sp. nov. (see below).

Distribution: Solomon Islands, at a depth of between 135 and 325 m. 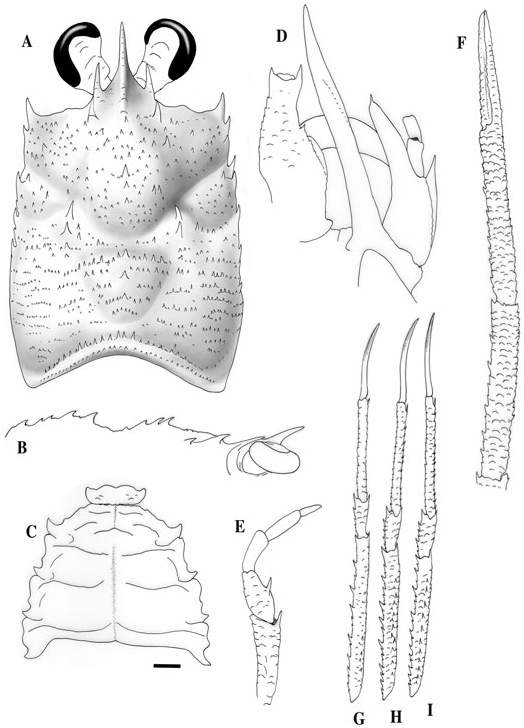