Distribution and host removed. Records of T. margarita   from El Rosario, west coast of Baja California in Crassadoma giganteus (Gray, 1825)   and the San Felipe area, northern Gulf of California, in Limaria pacifica (d'Orbigny, 1846)   and Barbatia reeveana (d'Orbigny, 1846)   by Campos (1989b) are confirmed misidentifications. Their taxonomic status is to be discussed in a forthcoming publication.

Remarks. The American genus Tumidotheres   consist of three species: the Atlantic T. maculatus (Say)   and the Pacific T. margarita   and T. orcutti (Rathbun, 1918)   . All these species share a swollen carapace covered with short, dense, and deciduous tomentum, a third maxilliped with a narrowly spatulate dactylus, inserted in angular notch in middle of ventral margin of propodus; the dactyl of the last ambulatory leg being much longer than that of the other ambulatory legs in adult females, and the abdomen with six somites and a freely articulating telson. Tumidotheres margarita   , which seems to prefer scallops (family Pectinidae   ), can be separated from its only known Pacific Ocean congener, T. orcutti   (host unknown), by the unique dentition of the cutting edge of the cheliped pollex, which is armed with small teeth, all similar in size ( Fig. 5 View FIGURE 5. A – B C –D). In contrast, the pollex of T. orcutti   has a blunt proximal lobe and a row of small teeth, the two distal teeth being conspicuously the largest ( Fig. 5 A –B View FIGURE 5. A – B ).

Some aspects of the life history of T. margarita   were revised by Campos (1989b), who pointed out this species develops into a hard stage crab (Christensen & McDermott 1958) after several molts of the infestive and prehard stages. Presumably, hard stage males and females leave their host to form a copulatory swarming in open sea, reinfesting their host after mating. Data from Felix-Pico (1992) suggest that T. margarita   , found in A. circularis   , start copulation during late winter and spring. After copulatory swarming, females re-infest their host, reaching the ovigerous stage during late spring and summer, and disappearing during autumn-winter. The discovery of males of T. margarita   , in prehard and hard stage, and females in posthard stages (Felix-Pico 1992) suggest this crab completes its postplanktonic life history in a single host species, which is re-infested after copulation in open water. Similarly T. maculatus   re-infests to Mytilus edulis   after copulation in open water (Pearce 1969). The absence of females in prehard and hard stage of T. margarita   is remarkable, which may suggest that these female stages may live in a different host that was overlooked or that the males in prehard and hard stage recorded by Felix-Pico (1992) included undetected females. Males and females in pre-hard and hard stages are identical and have a narrow abdomen, which results in them frequently being identified as males. The sexes in Pinnotheridae   at prehard and hard stage can be only recognized by locating the gonopods in males (see Campos 1989b, 2013) and pleopods in females along with the presence of female gonopores on the sixth thoracic sternite and male gonopods on the eighth thoracic sternite. 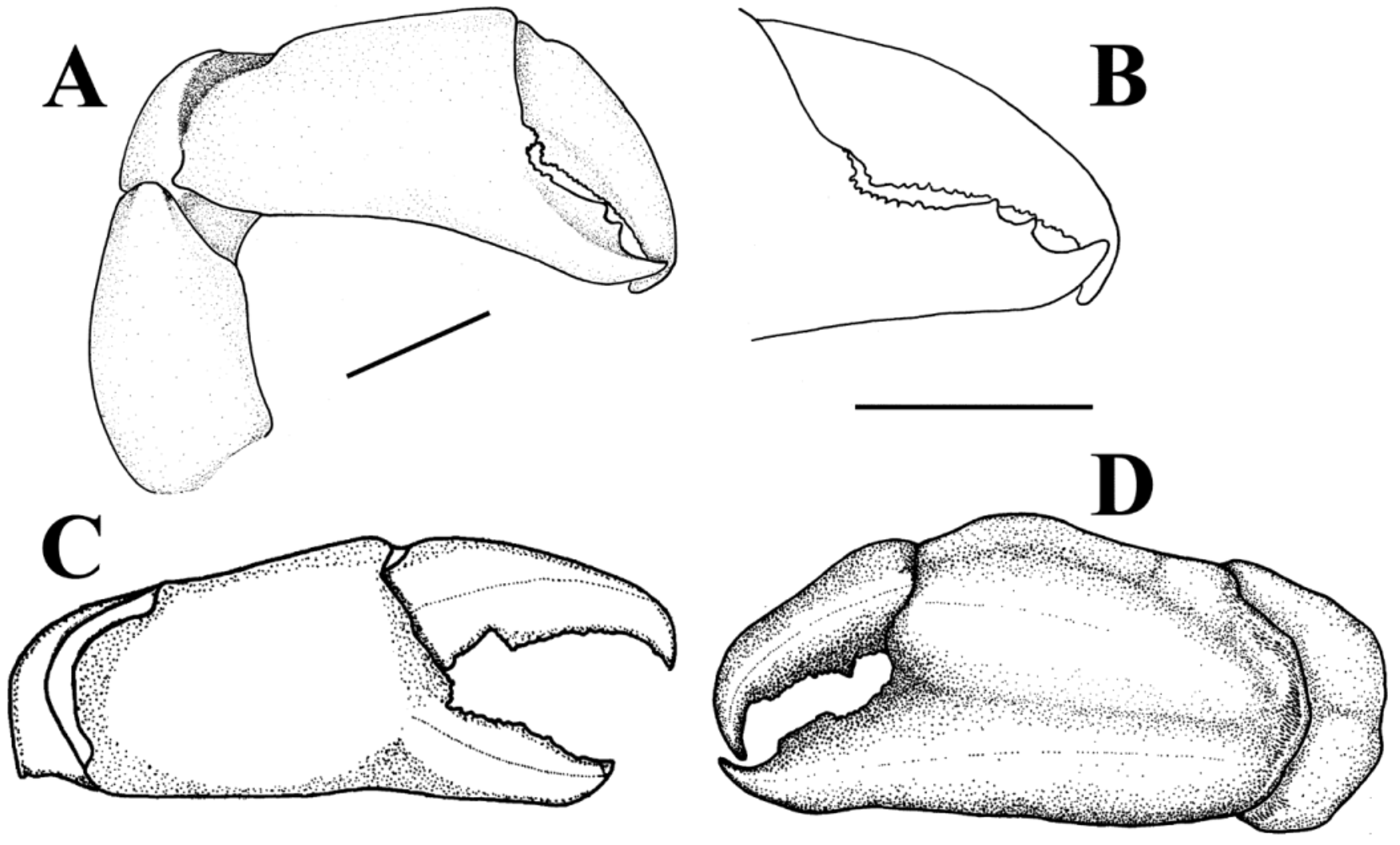