Remarks: The species is delimited here differently as compared to the latest revision of Solem (1984). Originally, amongst a single set of mostly eroded shells from the same locality, Iredale (1939: 69) recognized two Exiligada species   based on shell morphology and coloration: E. negriensis   , which he designated as the type species of the genus Exiligada   , and E. qualis   . The type locality as originally cited by Iredale (1939) (‘Negri Outstation’) could not be specified subsequently ( Solem, 1984). However, based on the information provided by Iredale [25 miles (= 40 km) north of Ord River Station, near Negri River], the type locality is herein restricted to an area close to the Negri River between the point where the Negri River flows into the Ord River in WA (17°04 ′ 11 ′′ S, and E. brabyi   both having shells with continuous spiral bands.

Exiligada negriensis   differs from Exiligada pallida   in absence of micropustulations on the shell. Its shell colour pattern is similar to that of four other Exiligada species   , which are distinguished by a lower number of spiral bands ( E. longicauda   ), by bands being more regularly interrupted ( E. nodulicauda   ), by lighter background ( E. pallida   ), and presence of maculations ( E. punctata   ). Its penis length relative to width (pl/pw) is smaller than average, almost as large as in E. pallida   ; epiphallus length relative to penis (el/pl) is average, as large as in E. pallida   . Inner penial wall sculpture is very similar to E. pallida   and E. punctata   , differing by wider posterior pad and shorter longitudinal pilasters of the penial wall never extending to posterior part of wall. Vagina length relative to penis and free oviduct (vl/pl, vl/ol) is the smallest amongst congeners.

128°53 ′ 10 ′′ E) and the Duncan Highway bridge over the Negri River near the WA / NT border (17°04 ′ 32 ′′ S, 129°00 ′ 10 ′′ E). Solem (1984: 672–673) considered the differences between the type series of E. negriensis   and E. qualis   as not significant and synonymized the two species names. Based on comparative study of additional material, we found that the area including the type locality is inhabited by three Exiligada species.   Differences between two of these species as delimited herein are consistent with the original delimitation of E. negriensis   and E. qualis   by Iredale (1939), refuting Solem’s (1984) proposal that both were identical (see also below under E. qualis   ). To complicate matters even further, Solem (1984: 676) used specimens from ‘Duncan Hwy, 37.2 km N of Nicholson River’ (about 60–70 km south of the type locality) to describe the genital anatomy of what he considered to be E. negriensis   . We studied material from sites much closer to the type locality and found that E. negriensis   differs from Solem’s (1984: 676, fig. 175) anatomical description. Based on shell colour patterns, we found that he used specimens from a different species, named herein Exiligada brabyi   further below, to illustrate the genital anatomy of E. negriensis   . Hence, Solem’s (1984) description of ‘ E. negriensis   ’ is based on mixed material from three species ( E. negriensis   , E. qualis   , E. brabyi   ). His description and figure of genital features is here attributed to E. brabyi   (see below). Exiligada negriensis   as restricted here is defined by the presence of dashed spiral bands on shells as opposed to E. qualis 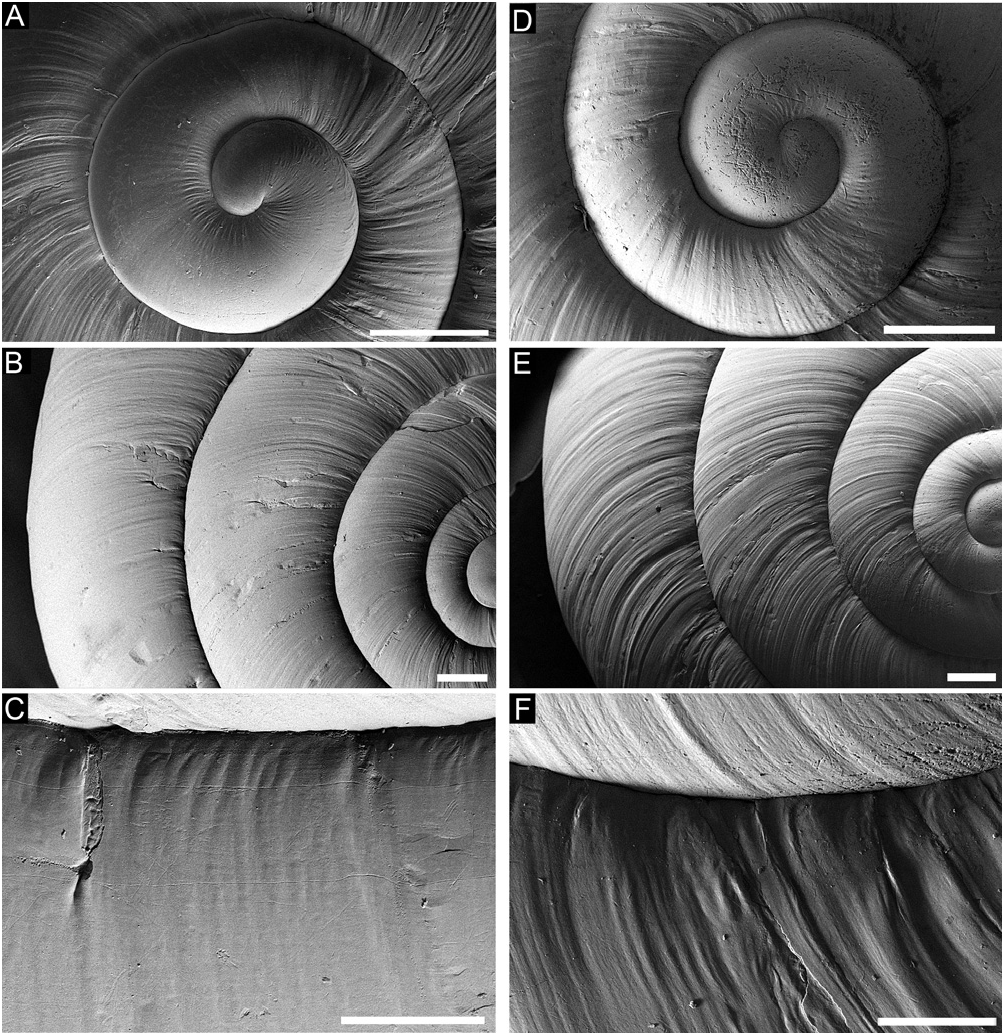