The Venezuelan specimens listed below are assigned to Metagonia beni   with some hesitation. The types of this species are from Bolivia, Beni, approximately 2500 km from the two Venezuelan localities. Previous records further include Peru, Brazil, and Argentina ( Huber 2000, 2014; Carvalho et al. 2010; Huber & Rheims 2011) but in some cases the assignment was explicitly tentative (e.g., Huber & Rheims 2011).

In the context of the present paper, paratypes of M. beni   and of the very similar M. uvita Huber, 1997   (from Costa Rica) were reexamined, together with a large number of specimens of ‘ Metagonia cf. beni   ’ from numerous localities (mostly Brazil; in ZFMK). The conclusion is that several undescribed species seem to exist in this group, but species limits are far from obvious.

The Venezuelan specimens listed below are almost identical to Amazonian specimens originating from the Brazilian states of Acre, Amazonas, Rondônia, and Pará. Males appear largely identical, with a procursus as shown in Figs 622–624 View Figs 622–624 . Cleared female genitalia of two specimens from each country revealed some slight differences: in females from Venezuela   , the posterior border of the epigynum was evenly curved ( Figs 627–628 View Figs 625–632 ), while in females from Brazil it had a low median protrusion (arrows in Figs 631, 632 View Figs 625–632 ); in addition, the internal genitalia were relatively longer in Brazilian specimens (width/ length ~1.1–1.2, versus 1.4–1.5 in two females from Venezuela   ). The interpretation of these differences is not  obvious since there is also variation among specimens from the same locality, for example in the shape and distance of the pore plates in Figs 627–628 and 631–632 View Figs 625–632 .

Both the Venezuelan and the Brazilian Amazonian specimens differ from ‘true’ Bolivian M. beni   (paratypes) by slightly smaller male palps and by slightly more angular procursus in dorsal view (arrow in Fig. 623 View Figs 622–624 ; compare with Huber 2000: fig. 252). Females of M. beni   from Bolivia resemble those

from Brazil more than those from Venezuela   (posterior border of epigynum not  evenly curved; internal genitalia width/length ~1.1; see Huber 2000: fig. 255).

Specimens of M. uvita Huber, 1997   and specimens from the Brazilian Atlantic Forest (and NE Argentina) differ more clearly from ‘true’ Bolivian M. beni   specimens in the shape of the procursus and are both

The conclusion here is that the ‘ Metagonia beni   complex’ needs considerably more study and the problem clearly goes beyond the scope of the present paper. We chose a conservative approach in assigning the Venezuelan specimens to M. beni   but the morphological differences suggest that this needs to be reevaluated in a more focused study.

Possibly widely distributed in northern South America (see Notes above); in Venezuela   known from only two localities in the state Bolívar (Fig. 1051).

At both Venezuelan localities, specimens were collected from the undersides of leaves in humid forests. The webs were closely attached to the leaf surface and barely visible, apparently identical to those described in some detail for M. uvita Huber, 1997   (Huber & Sch̹tte 2009). 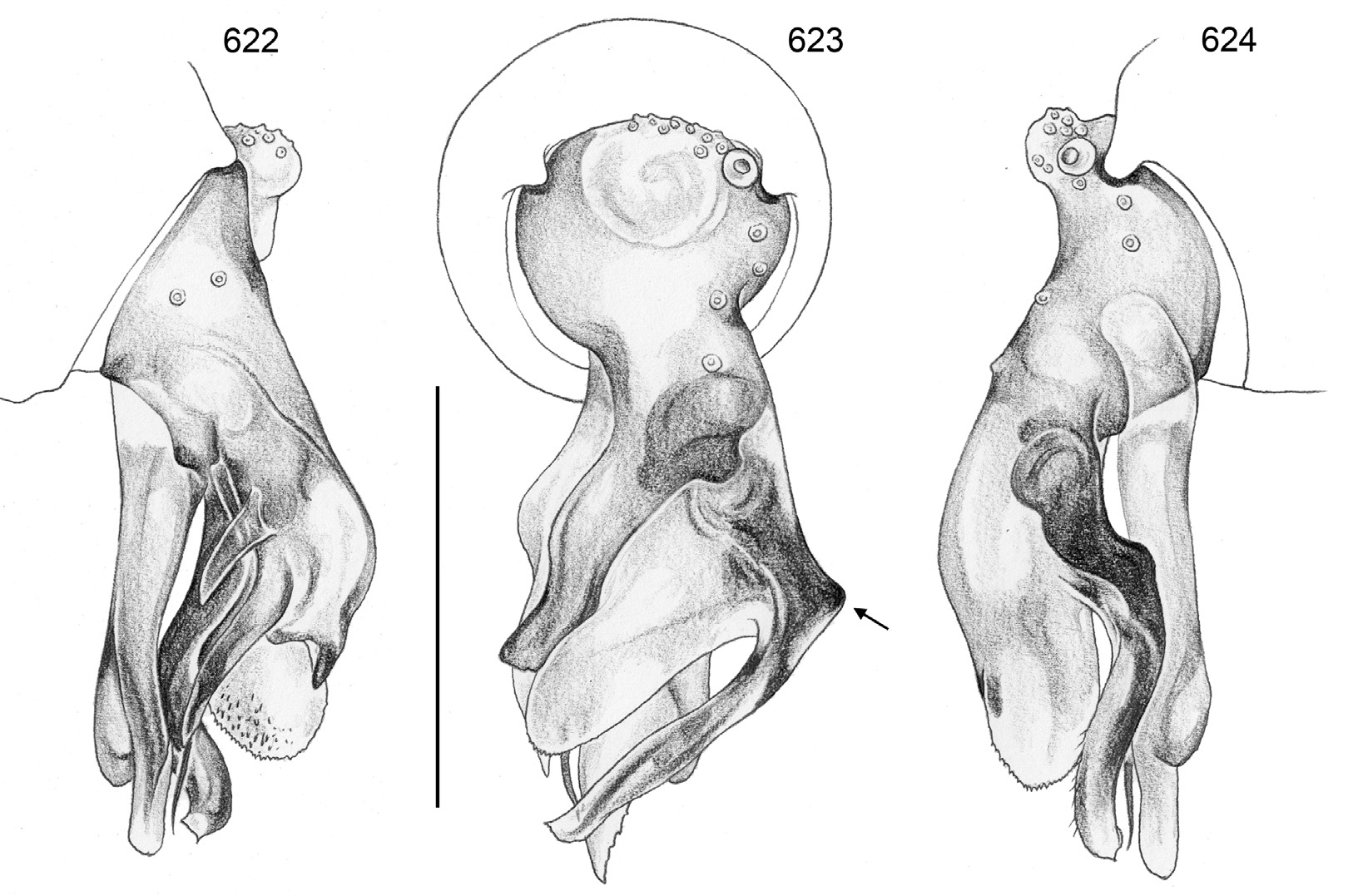