Diagnosis. Metatrachelas differs from T. minor , the type species of Trachelas , by the presence of a chilum, a smooth carapace with a broad cephalic part, the absence of an abdominal do scutum in males, a male palp without ve femoral groove or RPA and possessing a blunt RTA and an oval bulbus with a short apical embolus, an epigyne with a medially situated, wide epigynal hood as well as median COs connected to short and straight IDs, as opposed to the anterior COs and thin, coiled IDs connected to a longitudinally oriented median stretch ("median ducts of epigyne" of Kovblyuk & Nadolny (2009 )) in T. minor and related species, as well as large anterior oval to piriform ST 2, and dumbbell-shaped ST 1 of which the two globular lumina are interconnected by a thin, straight canal.

Metatrachelas differs from Paratrachelas by its smooth carapace and subrectangular PME, absence of an abdominal do scutum as well as absence of leg cusps in males, a male palp with an oval bulbus without conductor, an RTA which is short and blunt instead of long and pointed, a medially situated epigynal hood, dumbbell-shaped as opposed to sausage-shaped ST 1 with a straight internal duct and anteriorly situated ST 2 which are larger than ST 1.

Epigyne poorly sclerotized, with a central depression anteriorly bordered by a wide arc-shaped hood enclosing the COs. The large, anteriorly situated, oval to piriform ST 2 are clearly visible through the transparent cuticle (Bosselaers et al. 2009: figs. 25, 26, 32, 35, 36).

Vulva has two large oval to piriform ST 2 anterior to the arc-shaped epigynal hood ( Fig. 3 C View FIGURE 3 A – C ). Immediately posterior to the hood are the medially situated COs connected to a wide and short ID. ST 1 consists of two globular lumina interconnected by a thin straight canal. The smaller of both lumina is connected to the long, tapering FD, the larger one communicates with the ID.

Etymology. The genus name is derived from the Greek µετα, in between, in the middle, and the genus Trachelas , and refers to the position of the new genus on the preferred cladogram, in between T. minor and Paratrachelas . 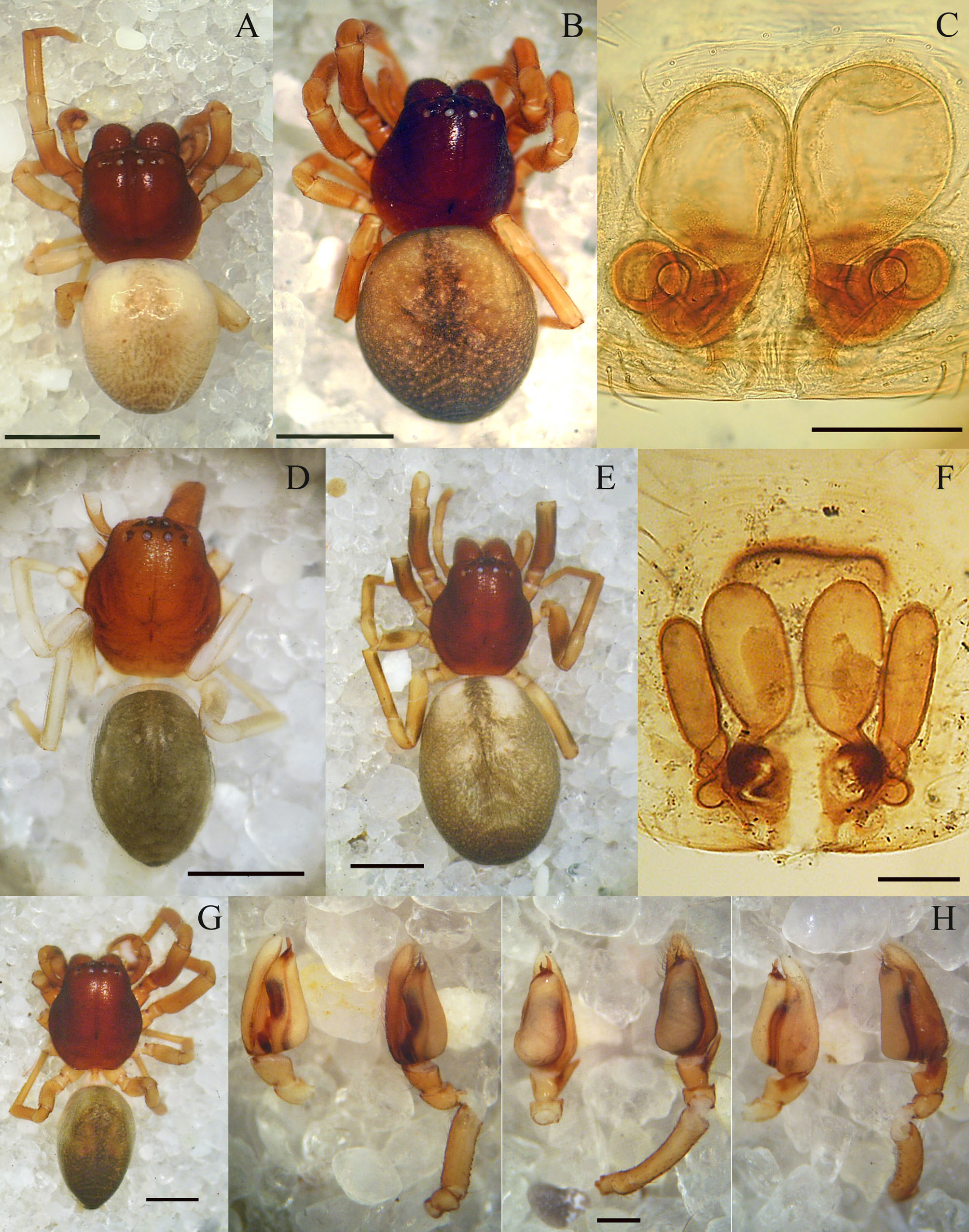