Distribution in the study area ( Fig. 2E View FIGURE 2 ):— Only found on Union island and the adjacent Frigate island, so expanding its distribution area, southwards by 135 km from Saint Lucia.

Discussion:— This disjunct population of Melocactus intortus   at Union and Frigate islands was quite unexpected and gave us the biggest surprise of the expedition. These plants, shows several differences with the similar M. broadwayi   . Firstly, the seedling plants are more robust and deeper brown spination ( Fig. 20A View FIGURE 20 ) compared to those of M. broadwayi   which display shorter and lighter coloured spines ( Fig. 20B View FIGURE 20 ). The adult plants showed further differences such as larger stems, straight, more robust spination and with a cephalium that elongates with age ( Figs. 21–22 View FIGURE 21 View FIGURE 22 ). A final and most important difference was observed in the flowers ( Fig. 23 View FIGURE 23 ), which are much smaller than M. broadwayi   with shorter petals that only just emerge from the cephalium and have pink stigma-lobes (white in M. broadwayi   ).

A more detailed survey of Union Island is however required to clarify if Melocactus broadwayi   also occurs there. Note that plants of M. intortus   without both flowers and elongated cephalium can easily be confused with M. broadwayi   . M. intortus   usually has thicker and straighter spination, but differences are not always clear. Very careful examination of the plants is required and the most effective way to distinguish between the two species is to observe the flowers (see Table 5).

The genus Melocactus   is not currently known from Barbados, but Hughes (1750: 136 & 226) wrote two descriptions for a plant he called “The Turk’s Head”. This vernacular English name is still in use today to refer to Melocactus species.   The first entry is given the Latin name “ Melocactus Americanus   ” and the second “ Melocactus Americana   major”. The Latin name “ Melocactus americanus   ” at first sight appear to be a valid binomial, but is not because this work predates the start of botanical nomenclature (1 May 1753). Both descriptions are good and clearly apply to a Melocactus species.   It is not obvious why Hughes (l.c.) thought there were two distinct taxa but perhaps the “major” word simply refers to larger plants. He fortunately provided some measurement for these plants, which he states are 1 foot (= 30 cm) tall and 2 feet (= 60cm) in circumference (= 20 cm in diameter). He continues and says the spines are about 1 inch (= 2.5cm) long and the cephalium is 8 inches (= 20 cm) long, and 3 inches (= 7.6 cm) in diameter and of a snuff (dark yellowish-brown) colour. This description corresponds with M. intortus   , especially the elongated cephalium, which is a feature of this species. We believe that this is the most likely identity of these plants, but unfortunately, we will never know with certainty, as neither herbarium material nor contemporary observations exist. Maycock (1830: 201) lists this species as Melocactus communis   and we assume it was present at that time, but it is not included in Gooding et al. (1965). It is now assumed to be extinct on Barbados and probably has been for some time. 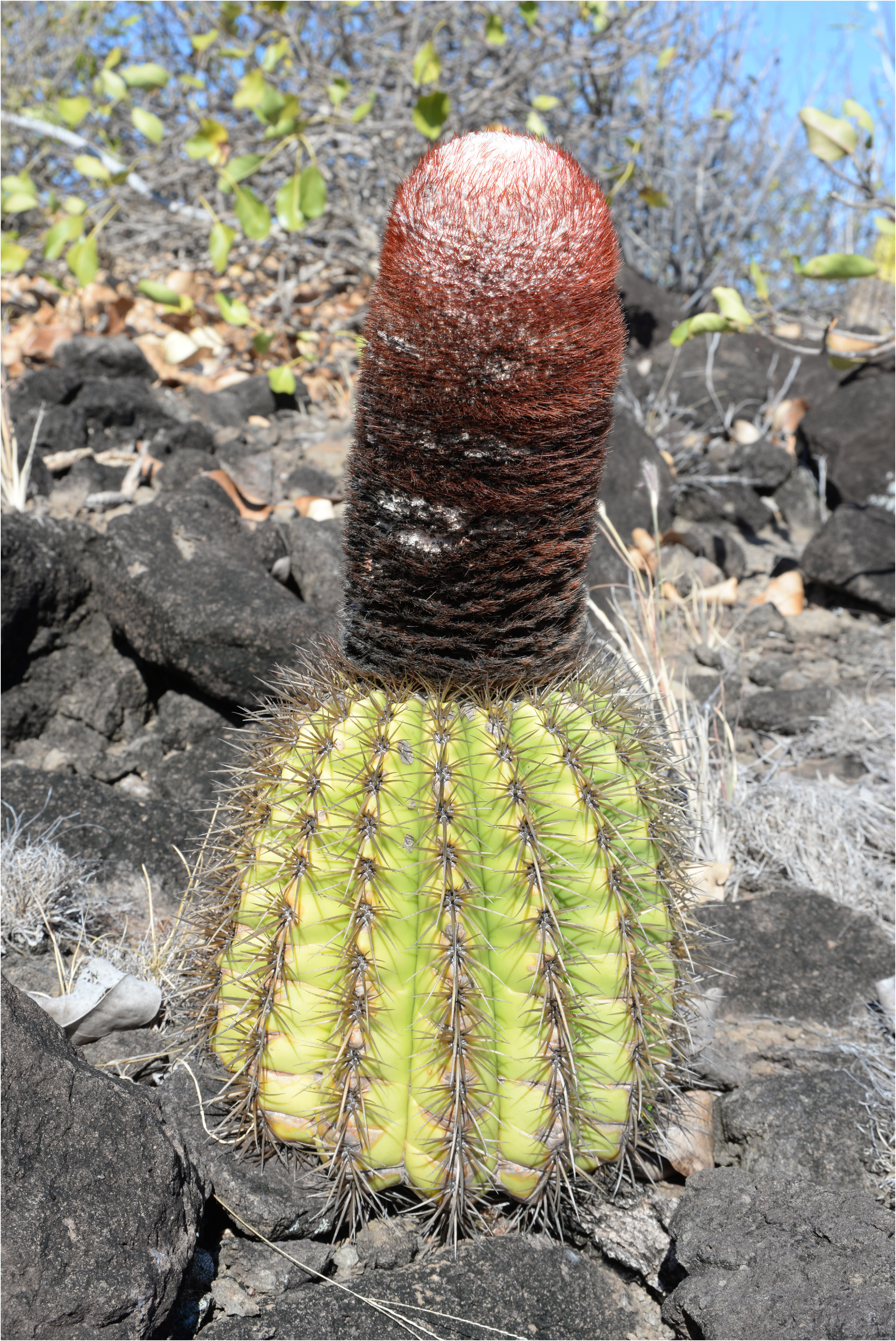 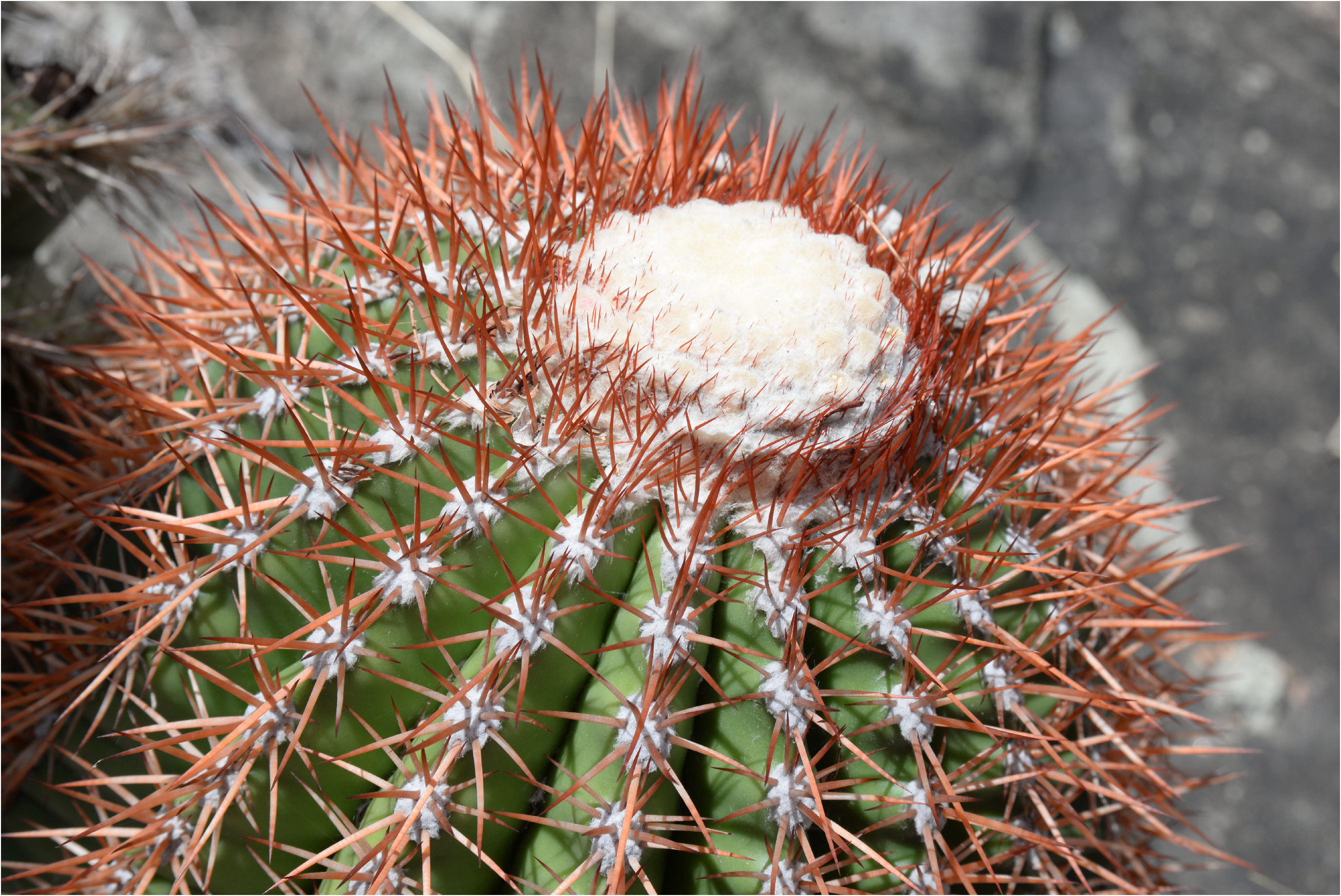