This species resembles Z. yusti Summers   in having dorsal shields smooth, two pairs of aggenital setae, tegument on venter and around dorsal shields slightly striated; prodorsal shield bearing 3 pairs of setae (vi, ve and sci), pairs c 2 and d 2 on small platelets, pairs h 1 and h 2 on the same terminal shield, tarsus IV with 7 setae. It differs from the latter in having the bases of pair c 1 completely fused with hysterosomal shield; the solenidion (15) on tarsus I is relatively shorter than in Z. yusti   (23); dorsal setae vi, ve, c 1, c 2, d 1, d 2, e 1 and e 2 also shorter; tarsus I with 13 setae (rather than 12).

Developmental changes [from protonymph]: addition of 2 setae on coxa IV, 1 seta on trochanters I, II and III, 1 seta on femora I and IV and on tarsus IV; addition of 1 pair of aggenital setae.

Remarks: This species inhabits mostly the base of rubber tree leaflets, in association with the mites Lorryia formosa Cooreman, 1958   ( Tydeidae   ), preying on their eggs and immatures, and with Tenuipalpus heveae Baker, 1945   ( Tenuipalpidae   ) (Hernandes & Feres, submitted). It was found associated with Z. agistzellia   sp. n.

Etymology: From Latin quasi, meaning almost, suchlike, and Latin mas, meaning male. The specific designation refers to the similarities of males of Agistemus   concerning some dorsal aspects: pair f 1 born on the main shield, and pair e 1 reduced; the pair d 2, however, is set on small platelets aside the main shield in males as much as in females.

Both species herein described appear to present some difficulties for their placement among stigmaeids. Females of Zetzellia agistzellia   sp. n, undoubtedly fit in Zetzellia   , whereas males clearly fit under Agistemus   . If only females or males had been found, they would certainly have been classified as Zetzellia   or Agistemus   , respectively. However, all stages were found together, and no females of Agistemus   nor any “traditional” males of Zetzellia   were found, and that fact allows us to conclude that they belong to the same species. Analysis of immature stages also adds more strength to this hypothesis, as we have found two kinds of deutonymphs: female, with dorsal arrangement of shields and genital setae as in the adult female (except seta g 1, present only in adult females), and male, with dorsal shields and genital setae as in the adult male. In Z. quasagistemas   sp. n, females expressly fit under this genus, whereas males have the setae f 1 unusually inserted on the main plate, resulting in an additional pair on this shield. This latter character is often found in males of Agistemus   . In this species, there are also two kinds of deutonymphs, which resemble females and males, respectively ( Figs. 41–43 View FIGURES 37 – 43 ).

This is not the first time these two genera have been the subject of discussion. Wood (1967) argued that the dorsal organization of platelets in Zetzellia   has four different patterns, which exhibit a gradual change from 3 pairs of small median plates to a large median plate (= the hysterosomal shield). In that context, the genus Agistemus   , which has a far more uniform arrangement, appears to represent a next step towards the integration of hysterosomal shield. Since both genera share many features and can only be distinguished by the location of seta d 2 ( Wood 1967), Wood considered that the distinction was not enough to support a new genus, Agistemus   . He solved this by suggesting the definition of Zetzellia   to be enlarged to include all species of Agistemus   . However, his suggestion was not accepted by most acarologists (e.g. Meyer 1969, Khanjani & Ueckermann 2002), who continued to use the previous definition of Summers (1960) and Gonzalez (1965).

Based on ontogenetic data, Gonzalez (1965) believed that Agistemus   evolved from the Z. maori   group of species. Meyer (1969), however, suggested ontogenetic data could merely support that “ Zetzellia   is ancestral to Agistemus   ” (p. 256). The present authors believe that Agistemus   probably originated from a Zetzellia   ­like ancestor, which evolved a large median shield comprising 5 pairs of setae, including d 2. Since Zetzellia   spp. present heterogenous arrangements of dorsal shields, and if Gonzalez (1965) is right, that genus might be paraphyletic, with a group of species giving birth to a new genus, Agistemus   .

The discovery of such species raises some problems concerning the genus concept among Stigmaeidae   . Since we found two species which have features of both Agistemus   and Zetzellia   present in different sexes, maybe those features do not reflect a real degree of difference enough to split two genera, and should be under review. Wood (1967) mentioned another two species of Zetzellia   , Z. maori Gonzalez (1965)   and Z. oudemansi Wood (1967)   , which have different organization of dorsal shields for females and males. Males of the two latter species resembles Z. australis   in the aspect of dorsal shields. Zetzellia malvinae Matioli, Ueckermann & Oliveira (2002)   and Z. graeciana ( Gonzalez 1965)   also have different dorsal organization for females and males.

It is an intriguing fact that, concerning two species that closely resemble Z. agistzellia   sp. n, namely Z. gonzalezi   and Z. silvicola   , only females were found, and it would be worthwhile to speculate on whether the males of those species also resemble the Agistemus   ­like males of Z. agistzellia   . Males of Zetzellia quasagistemas   sp. n, are unusual in having 5 pairs of setae on the hysterosomal shield. The presence of at most 4 pairs of setae was thought to be the rule in Zetzellia ( Summers 1966)   . A remarkable feature of males of Agistemus   is that the dorsal seta f 1 is borne on the hind margin of hysterosomal shield, and seta e 1 seems to be frequently reduced. Zetzellia quasagistemas   also has those features. Unusually, Agistemus tarsilobus Flechtmann (1995)   appears to have that setae f 1 directly inserted on the tegument.

It is an unfortunate fact that only a few descriptions of Zetzellia   spp. include details of males, e.g. Z. mali (Ewing, 1917)   , Z. graeciana   , Z. maori   , Z. oudemansi   and Z. malvinae   . Most species have been described based only on females, which is problematic given that a single species can show sex differences enough to possibly mislead taxonomists to erect new taxa. The discovery of more species with such sexually dimorphic features shall help to solve this puzzle, and a complete cladistic analysis of stigmaeid genera using molecular, morphological and ontogenetic characters should provide a clearer picture of the evolution of this family. Descriptions of immatures should also throw more light on this matter. 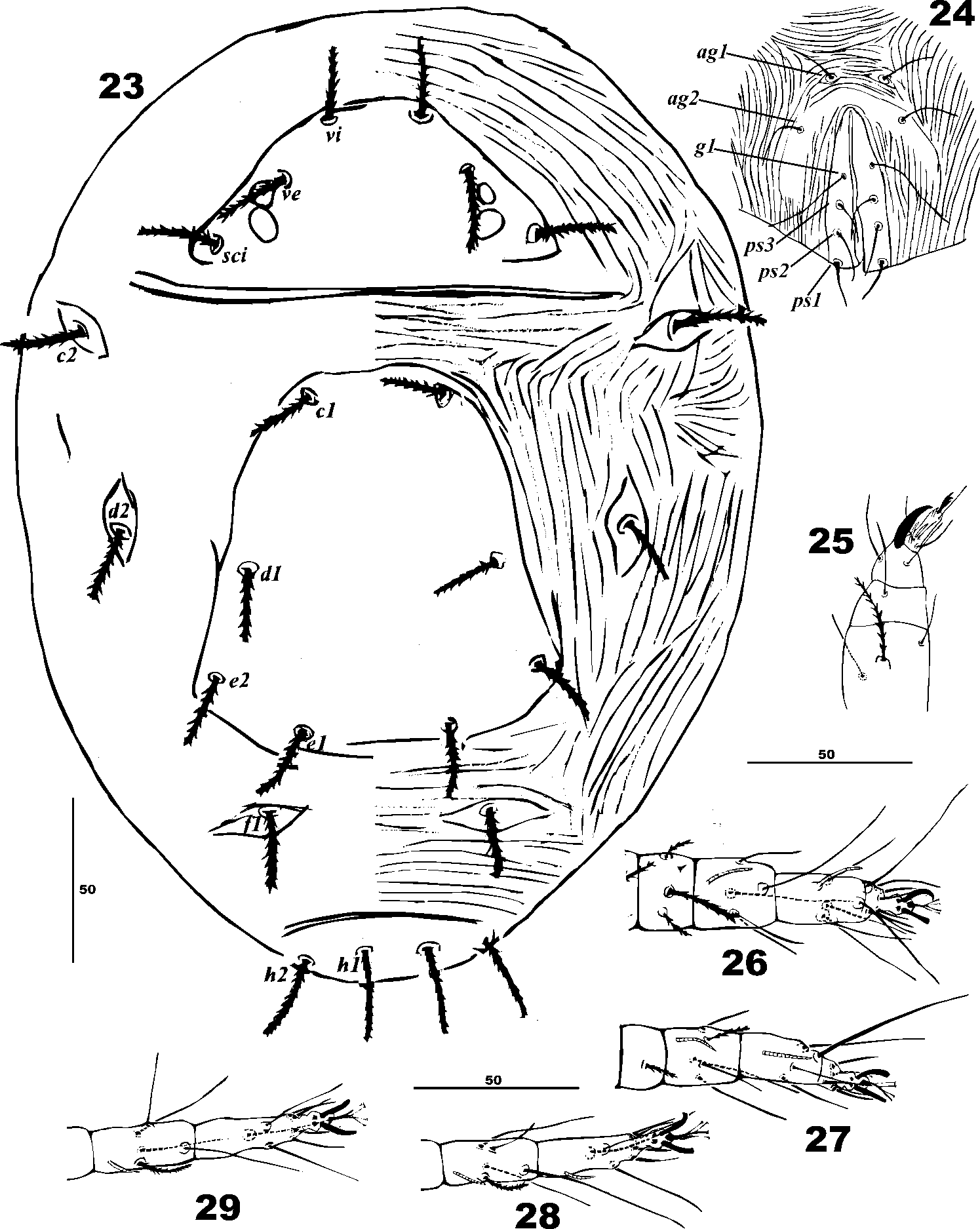 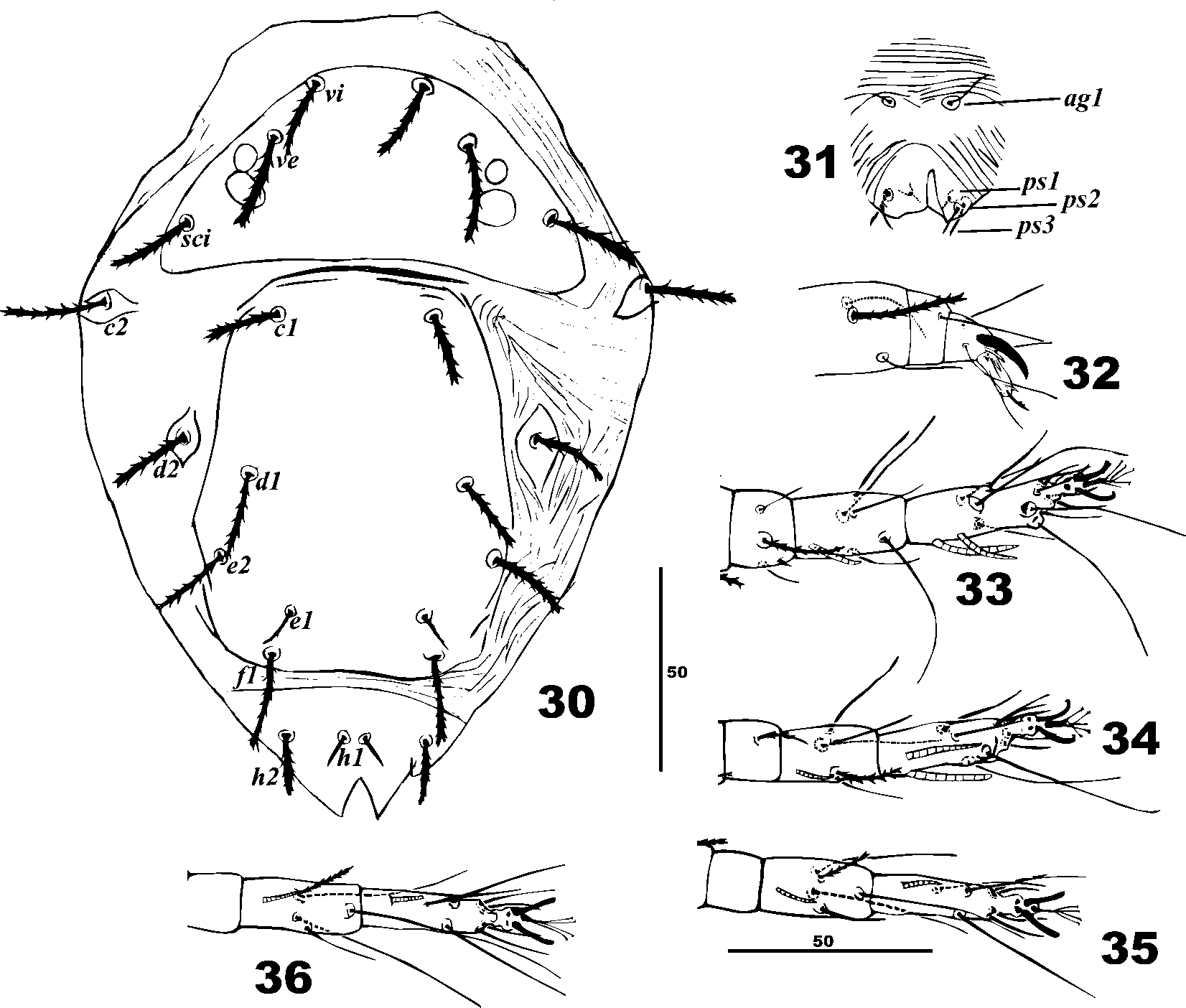 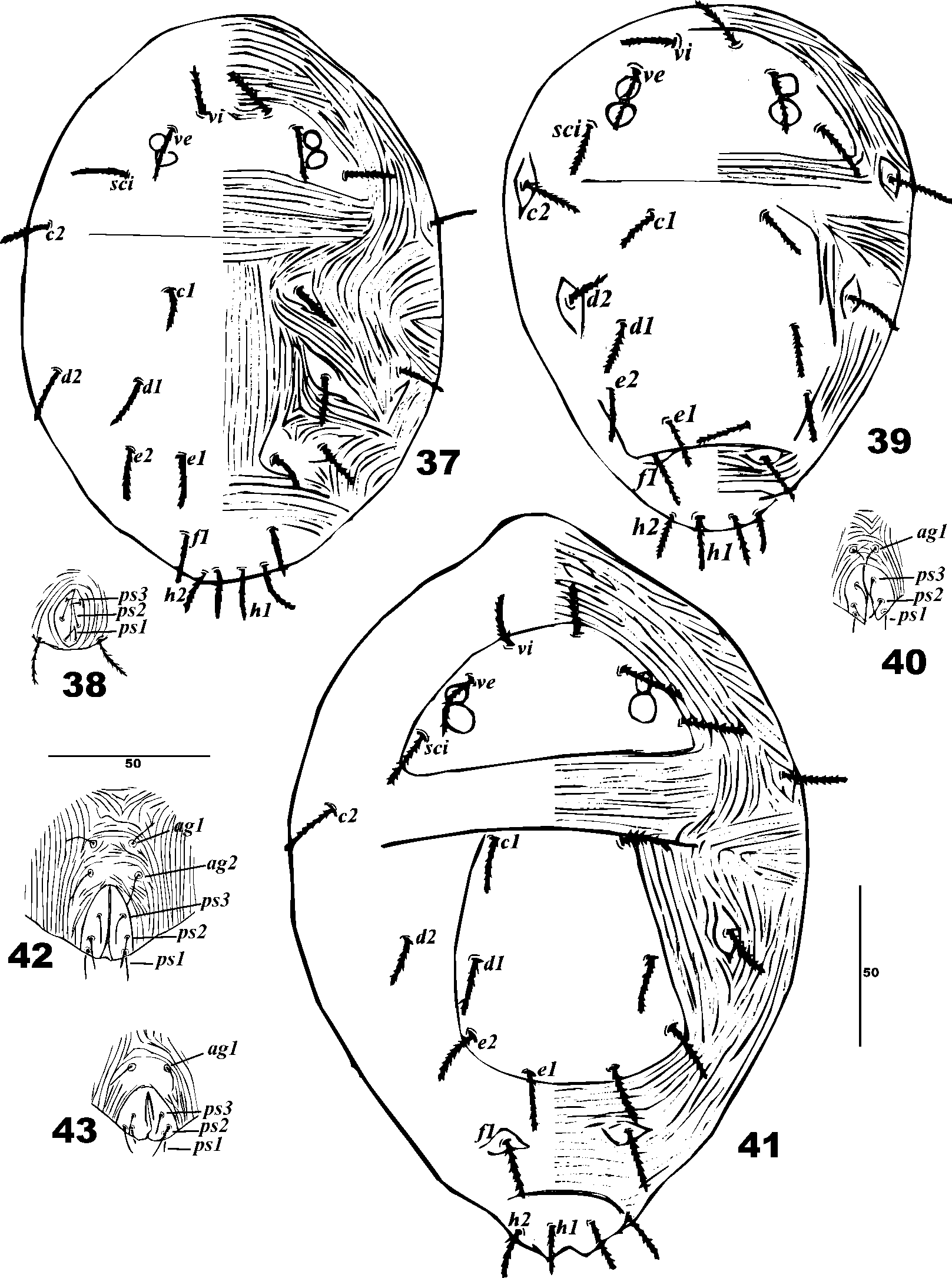