Diagnosis: Sternarchorhynchus jaimei   is distinguished from congeners by the following combination of characters: a short gape that terminates posteriorly at, or slightly short of, the vertical through the anterior nares, the absence of scales along the mid-dorsal region of the body as far posteriorly as the vertical through the posterior limit of the pectoral fin, the presence of a narrow, more lightly coloured band of mid-dorsal pigmentation on the head and mid-dorsal region of the body extending posteriorly to the origin of the electroreceptive filament and sometimes beyond that point, the lateral line that extends to the base of the caudal fin, the presence of four to seven premaxillary teeth, 23–26 anterior unbranched anal-fin rays, and 180– 195 total anal-fin rays, the distance from the anus to the anal-fin insertion (4.8–12.3% of HL), the distance from the posterior naris to the snout (8.1– 12.9% of HL), the head width (22.7–28.9% of HL), the head depth at the nape (41.8–43.2% of HL), the interocular distance (6.6–10.7% of HL), the postocular distance (41.5–49.1% of HL), the height of the branchial opening (11.4–17.9% of HL), the postocular distance (41.5–58.7% of HL), the pectoral-fin length (35.7–58.4% of HL), the caudal depth (10.1– 19.2% of caudal length), and the caudal-fin length (17.3–46.0% of caudal length).

Pectoral-fin rays ii + 11–14 [ii + 11] (N = 12). Analfin origin located anterior to opercle. Anterior unbranched anal-fin rays 23–36 [25] (N = 12). Total anal-fin rays 180–195 [184] (N = 7). Scales above lateral line at midbody nine to 12 [12] (N = 12). Scales along mid-dorsal midline of body absent or sparse to midlength of body in smaller specimens, and absent in larger specimen as far posteriorly as vertical through posterior limit of pectoral fin, then sparse to midlength of body and followed by regular series of scales as far posteriorly as origin of midsaggital electroreceptive filament. Origin of midsaggital electroreceptive filament located on posterior half of body, at point approximately 65% of TL. Filament extending posteriorly four to six scales anterior of vertical through posterior terminus of base of anal fin. Tail compressed and short, ending in small, somewhat rounded caudal fin in juveniles and in small, somewhat lanceolate fin in large individuals. Caudal-fin rays 11–18 [14] (N = 7).

Etymology: The species name, jaimei   , is in honour of Jaime Ribeiro Carvalho Júnior, of the Centro do Jovem Aquarista, in recognition of his invaluable assistance to the first author during the early phases of his studies of gymnotiforms.

Remarks: One of the examined specimens, a female of 115 mm TL, had clearly developing eggs and it seems likely that the species matures at relatively small body sizes. Sternarchorhynchus jaimei   was collected at the same type locality as S. higuchii   . The species differ in various details of pigmentation, meristics, and morphometrics detailed in Remarks under S. higuchii   . 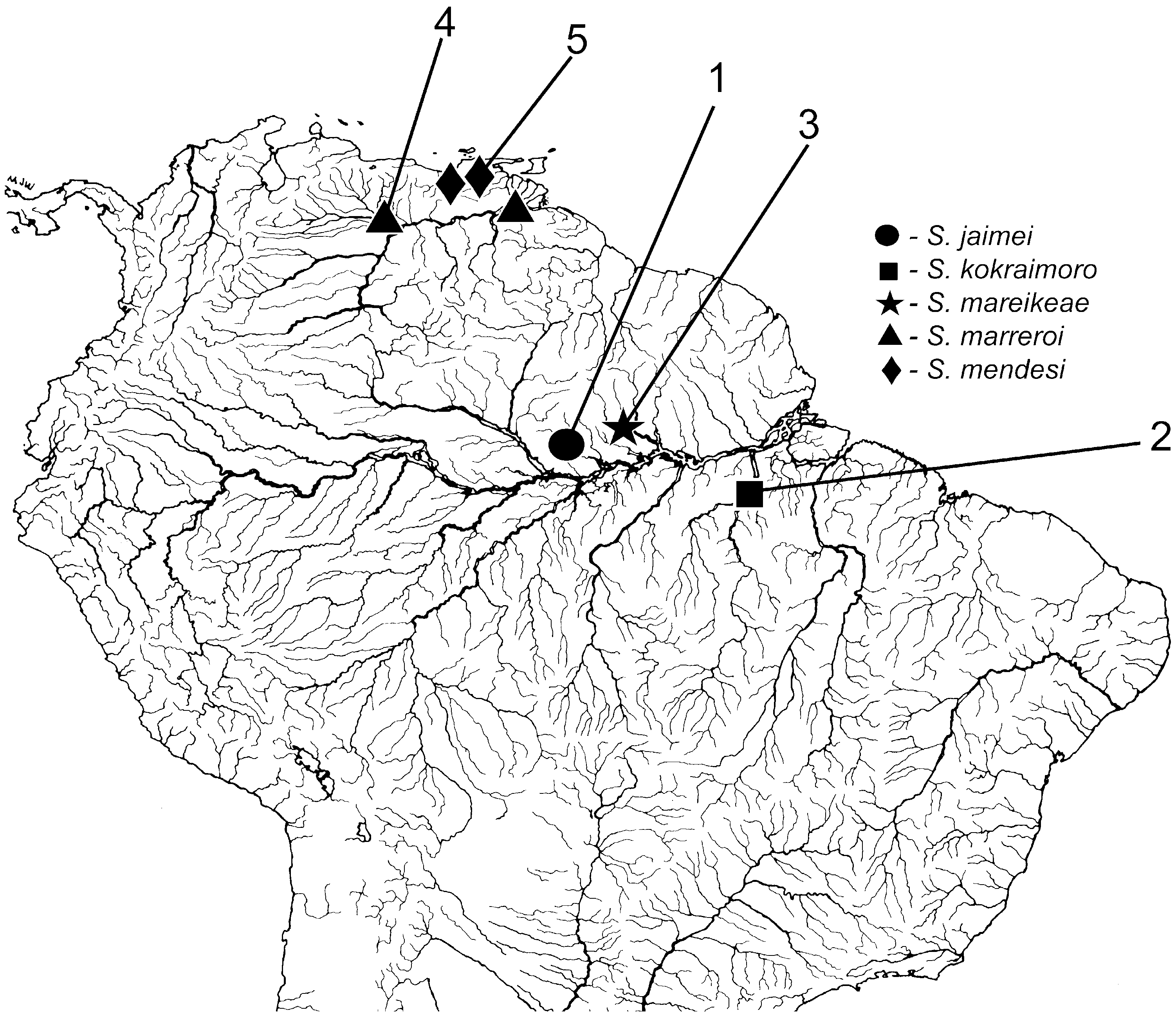