Diagnosis: Sternarchorhynchus schwassmanni is distinguished from congeners by the following combination of characters: a short gape that terminates posteriorly at, or slightly short of, the vertical through the anterior nares, in having the scales along the mid-dorsal portion of the body anterior to the origin of the electroreceptive filament sparse and covered by skin to varying degrees, the presence of a more lightly coloured, narrow band of mid-dorsal pigmentation on the head and mid-dorsal region of the body extending posteriorly to the origin of the electroreceptive filament and sometimes beyond that point, the extension of the dorsal filament to a point one or two scales posterior of the vertical through the posterior terminus of the base of the anal fin, the possession of ten teeth in the outer tooth row on the dentary, 15 precaudal vertebrae, 25–26 anterior unbranched anal-fin rays, nine to ten scales above the lateral line at the midbody, 164–166 total anal-fin rays, the greatest body depth (12.4–12.7% of LEA), the length of the base of the anal fin (80.2–83.9% of LEA), the prepectoral-fin distance (21.8–22.2% of LEA), the head depth at the nape (49.5–49.6% of HL), the snout length (56.8–57.3% of SL), the mouth length (5.7– 6.3% of HL), the interocular width (9.1–9.7% of HL), the eye diameter (5.3–6.4% of HL), the distance from the posterior naris to the eye (44.2–45.4% of HL), the postocular distance (42.4–43.3% of HL), the height of the branchial opening (14.8–15.2% of HL), and the pectoral-fin length (35.5–38.2% of HL).

Lateral line extending posteriorly to base of caudal fin, but absent on fin. Snout elongate, compressed and curved ventrally distally. Mouth terminal and relatively small, with rictus located slightly anterior to vertical through anterior naris. Anus and urogenital papilla located ventral to head. Those structures situated along, or slightly anterior of, vertical through eye. Combined opening for anus and urogenital papilla ovoid.

Distribution: Sternarchorhynchus schwassmanni is only known from the type locality in the Rio Araguaia of eastern Brazil ( Fig. 68 View Figure 68 ).

Etymology: The species name, schwassmanni , is in honour of Horst O. Schwassmann, University of Florida, for his contributions to the knowledge of Neotropical electric knifefishes. 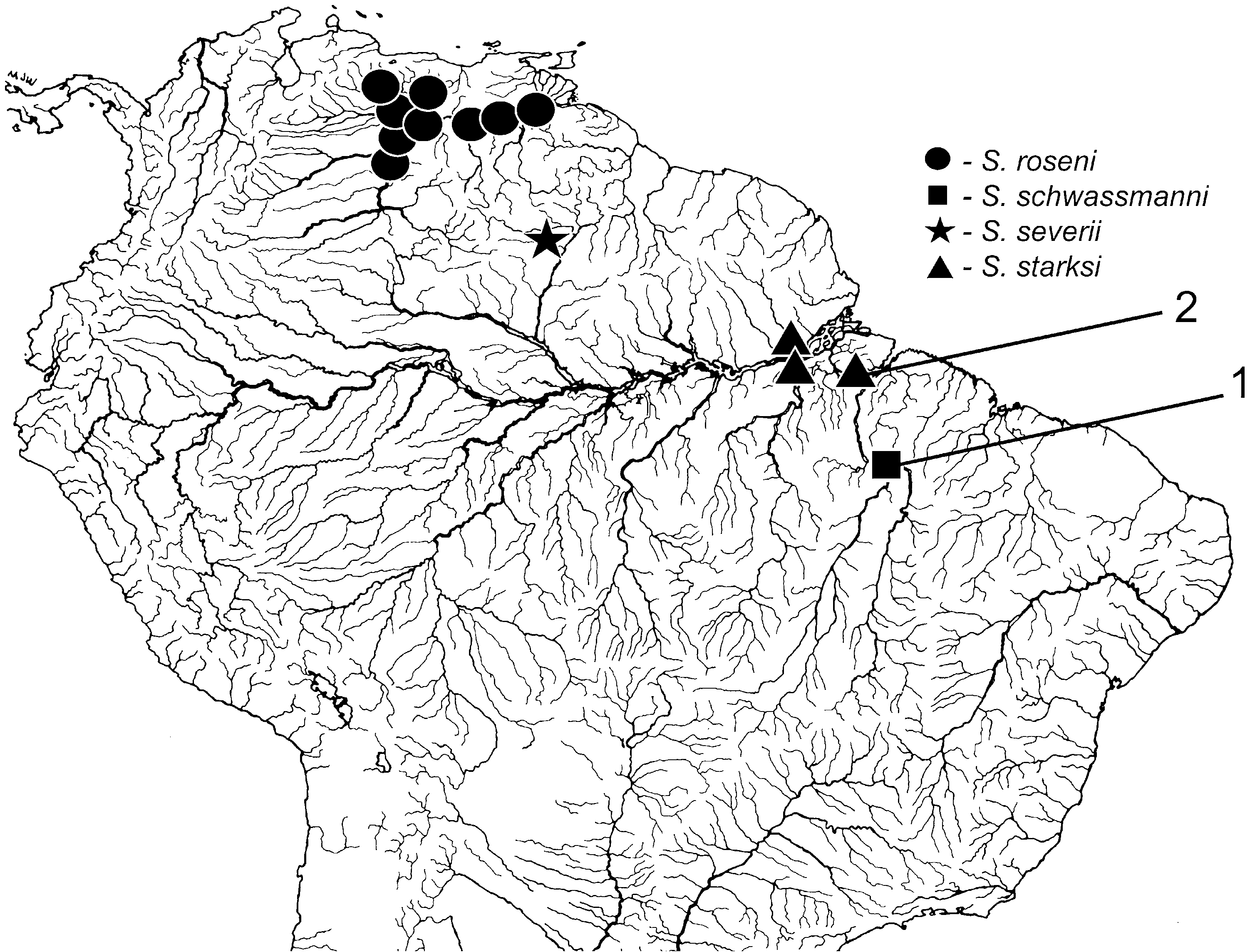