Remarks. The shell from USNM 126791 is selected as the lectotype ( Figure 3A View FIGURE 3 ) since it is the best preserved and the figured specimen by Dall (1889b). A redescription is provided here to be more specific about the features present in the lectotype and to add features not cited in the original description (i.e., protoconch, incremental scars, base, outer lip). Some shells of C. egregia (e.g., paralectotype USNM 126799 [ Figure 3B View FIGURE 3 ] and IBUFRJ 12360 [ Figure 4 View FIGURE 4 A–G]) are covered by a brownish layer of possible minerals, which can be related to the type of environment they inhabit in the deep sea.

Costaclis egregia was formerly introduced in Aclis but later transferred to Costaclis by Bartsch (1947). Bouchet & Warén (1986) did not comment about the status of this species in Costaclis , but their statement that “ … Costaclis was erected by Bartsch for a mixture of slender species with axial ribs, but only the type species can be kept in the genus”, indicates that they disregard this species as a member of Costaclis . However, the presence of numerous and well-developed axial ribs fits the concept of the genus established by Bartsch (1947).

Dall (1889b) described the species without an umbilicus, but an umbilical fissure is usually present in adult specimens ( Figure 3C View FIGURE 3 ). We can also add to the original description that the protoconch is subcylindrical.

Absal   GoogleMaps „o et al. (2003) were the first to record C. egregia in Brazil based on material from the continental slope off Northeast Brazil. These authors cited this species in a depth of 250 m, which would be the shallowest record of C. egregia . However, it is an incorrect indication of coordinate and depth. Actually, REVIZEE-Central V stn. 4f corresponds to the coordinate 14°48′50″S 38°43′58″W and depth of 1700 m ( Lavrado 2006), which becomes the deepest record of the species. We reassessed the record by Absal„o (2010: annotated list) and this represents the southernmost record of the species (~ 22°S).

Costaclis egregia can be distinguished from C. hyalina , a congener that also occurs in Brazil, by the teleoconch sculpture with more numerous and well-developed axial ribs, and by the more convex teleoconch whorls.

Costaclis egregia can also be distinguished from C. mizon by the less pronounced axial ribs, wider spire angle and by the greater length. One shell of C. egregia studied here ( Figure 3C View FIGURE 3 ) with 11 whorls reaches 19.8 mm long while the lectotype of C. mizon ( Figure 3E View FIGURE 3 ) has 15 whorls and is 15.4 mm long. 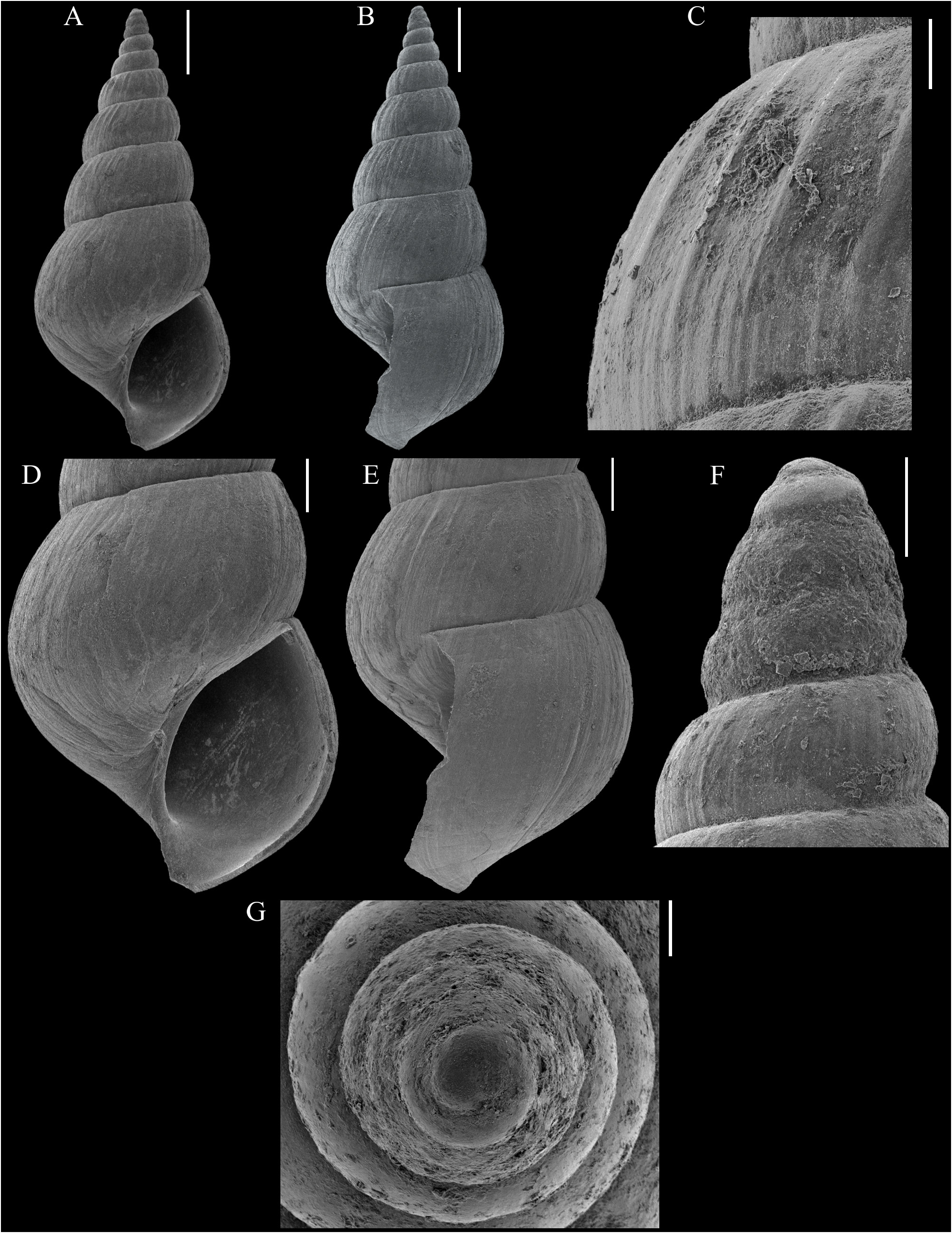