Diagnosis. The general body shape is rounded to oval, with well-developed meso- and metasternal carinae on the midline ( Figs. 2 View FIGURE 2 A–D). The anterior margin of the pronotum is almost straight between the eyes ( Fig. 3A View FIGURE 3 ). A male accessory genitalic process of tergum VI is usually present (but never as developed as in Ambrysus ) and the male medial lobes of tergum VIII (pseudoparameres) are small, narrow, and asymmetrical ( Fig. 6B View FIGURE 6 ).

Discussion. Limnocoris was established by Stål (1860) to include a single species collected at Rio de Janeiro, southeastern Brazil, named by him as L. insignis . Subsequently, Stål (1861) described the genus Borborocoris to accommodate a single species, B. pallescens Stål, 1861 , collected in Colombia. In his study of the Hemiptera from Mexico, Stål (1862) transferred Naucoris profunda Say, 1831 to Borborocoris , in addition to correcting its specific epithet. In the following decade, Stål (1876) proposed the division Limnocoraria to include those two genera described by him ( Limnocoris and Borborocoris ) and transferred B. profundus to Limnocoris . In the next year, Lethierry (1877) described Borborocoris volxemi (incorrectly named Borbocoris) based on material from Portugal. Given that the distribution of Limnocorinae is otherwise exclusively New World, doubts remained about the identity of the Portugal species. Kirkaldy & Torre-Bueno (1909: 184) had already mentioned that the record for Portugal is wrong and that this species is from South America. This was recently resolved when Nieser et al. (2013) found the type series and recognized that specimens collected in Brazil had become mixed with samples from Portugal.

Montandon (1897) elevated to subfamily status the division proposed by Stål (1876), naming it Limnocorinae . In that contribution, he presented the first revision of the genus, proposing Borborocoris as a junior synonym of Limnocoris , in addition to the descriptions of nine species. The following year, Montandon (1898) published another study describing six more species. With the exception of isolated species descriptions ( Champion 1901; Montandon 1900, 1910, 1911; Poisson 1954), the genus was studied systematically again 40 years later, beginning with the studies published by De Carlo (1941, 1951, 1966, 1967) and La Rivers (1950, 1957, 1962, 1970, 1971, 1973, 1974). These two researchers were the predominant specialists of the fauna of Naucoridae of the Americas in the period from 1941–1974. Specifically for Limnocorinae , they described 39 species (including those that are now considered junior synonyms). In these studies, two other monotypic genera were described within Limnocorinae , Usingerina La Rivers, 1950 and Sattleriella De Carlo, 1966 , from the the United States and southern Brazil, respectively. After this period, the primary studies were those of Roback & Nieser (1974), Nieser (1975), Nieser et al. (1993), and Manzano et al. (1995), in which eight more species were described.

Until the 1990s, most of the species descriptions of Limnocoris were published in isolated works, without standardization of terminology or characters used in the diagnosis, which generated difficulties in identifying the species. Sites & Willig (1994), in agreement with the arguments offered by De Carlo (1966), pointed out that Usingerina moapensis La Rivers was only a species of Limnocoris with specific modifications for existence in a thermally-influenced stream, and formalized the synonymy of Usingerina with Limnocoris .

At the beginning of the 21st century, Nieser & López-Ruf (2001) published a major reference on the study of Limnocoris , in which they reviewed 28 species occurring in southern South America east of the Andes, in addition to including a catalog of all species with institutional depositories for the primary types. In that study, they provided electron micrographs of the mesosternal carina of most of the studied species, solving some taxonomic questions generated by previous authors.Among the nomenclatural acts proposed in that study was the synonymy of the genus Sattleriella with Limnocoris ; the authors used the same argument by Sites & Willig (1994), claiming S. siolii was simply a species of Limnocoris with specific modifications.

Nieser & López-Ruf (2001) also proposed for the first time the division of the genus into two groups of species: insignis and maculiceps. This division was based on hemelytral shape: species of the insignis group exhibited the lateral margin of the wing posterior to the embolium strongly curved, exposing a wide part of the abdominal terga; whereas in the maculiceps group the species did not present the lateral margin strongly curved, leaving exposed only a narrow part of the abdominal terga. In those two species groups, the authors included the species occuring in southern South America east of the Andes, but did not specify to which group the other species of Limnocoris belonged. Because the divisions are based on only one character, which is variable in some species, we do not follow the division distinction in the present study.

Natural history. The naucorids, also known as saucer bugs or creeping water bugs, live in a variety of aquatic environments from standing waters, such as ponds and lakes, to torrential waters. Limnocoris usually occurs in shallow streams where the substrate is mainly composed of gravel and/or sand and specimens are frequently associated with leaf packs or roots of riparian vegetation. It is common to collect more than one species of the genus in the same locality; in these cases, it is easy to determine how the species partition the habitat after a modicum of sampling. They rarely fly and are not attracted to lights; thus, collection at a light trap or flight interception trap is ineffective for the collection of these insects. The most effective method to collect Limnocoris is actively searching using an aquatic insect net, or other insect net adapted for use in water.

Wing polymorphism. Pterypolymorphism is common in many families of Heteroptera, and in Naucoridae Limnocoris is no exception. The forewing usually does not differ in size; variation in this wing is associated with the presence or absence of the claval suture, the posterior suture of the embolium, and the reduction or non-reduction of the membrane. Two species occurring in southeastern Brazil, L. acutalis La Rivers, 1974 and L. siolii , have the forewing distinctly reduced in some specimens, leaving the posterior abdominal terga exposed. The hindwing usually has more variation of size and can be distinctly reduced, not exceeding abdominal tergum II, although the most common condition is that the wing does not exceed tergum IV. Although Schuh & Slater (1995) described five types of wing conditions in Nepomorpha, researchers of aquatic Heteroptera (e.g., Nieser & López-Ruf 2001) generally characterize specimens as brachypterous or macropterous based on the development of the hindwing. Brachypterous specimens have the hindwing reduced (with different degrees of reduction), whereas macropterous specimens have the hindwing fully developed. In brachypterous forms, the claval suture is absent or underdeveloped (e.g., Figs. 3A View FIGURE 3 , 17A View FIGURE 17 ), but in some specimens it may be evident (e.g., Fig. 9A View FIGURE 9 ). Thus, in some taxa, in order to know if the specimen is brachypterous or macropterous, it is necessary to raise the forewing to observe the size of the hindwing. In macropterous specimens, the claval suture is always well-developed. In some species, the forms of the posterolateral corner of the pronotum and the lateral margin of the embolium ( Figs. 3A, 3C View FIGURE 3 , 9A, 9C View FIGURE 9 , 17A, 17C View FIGURE 17 ), in addition to body size, are directly associated with the development of the hindwings. Some researchers have described conspecific brachypterous and macropterous specimens as distinct species. Therefore, documenting this variation is important to avoid misidentification.

Putative synapomorphies. After the study of all described species of Limnocoris , we were able to recognize characters that remain intraspecifically constant that were not mentioned in the literature by previous authors. Except for those of the 6th and 7th abdominal terga, and terminalia, all the characters have the same state in males and females. Usually, these characters also have the same state in morphologically similar species, which suggests they can be informative at a more comprehensive level (i.e., species groups or complexes). In the head, the anterior region of the maxillary plate can be tumescent or flat. In all species from North America, the maxillary plate is tumescent. A flat maxillary plate occurs in some species from the Brazilian Atlantic Forest (e.g., L. abbreviatus La Rivers, 1974 , L. insignis , L. sattleri De Carlo, 1966 , L. submontandoni La Rivers, 1974 ). The antenna has four segments: scape, pedicel, and two flagellomeres. The flagellomeres may or may not be partially fused. 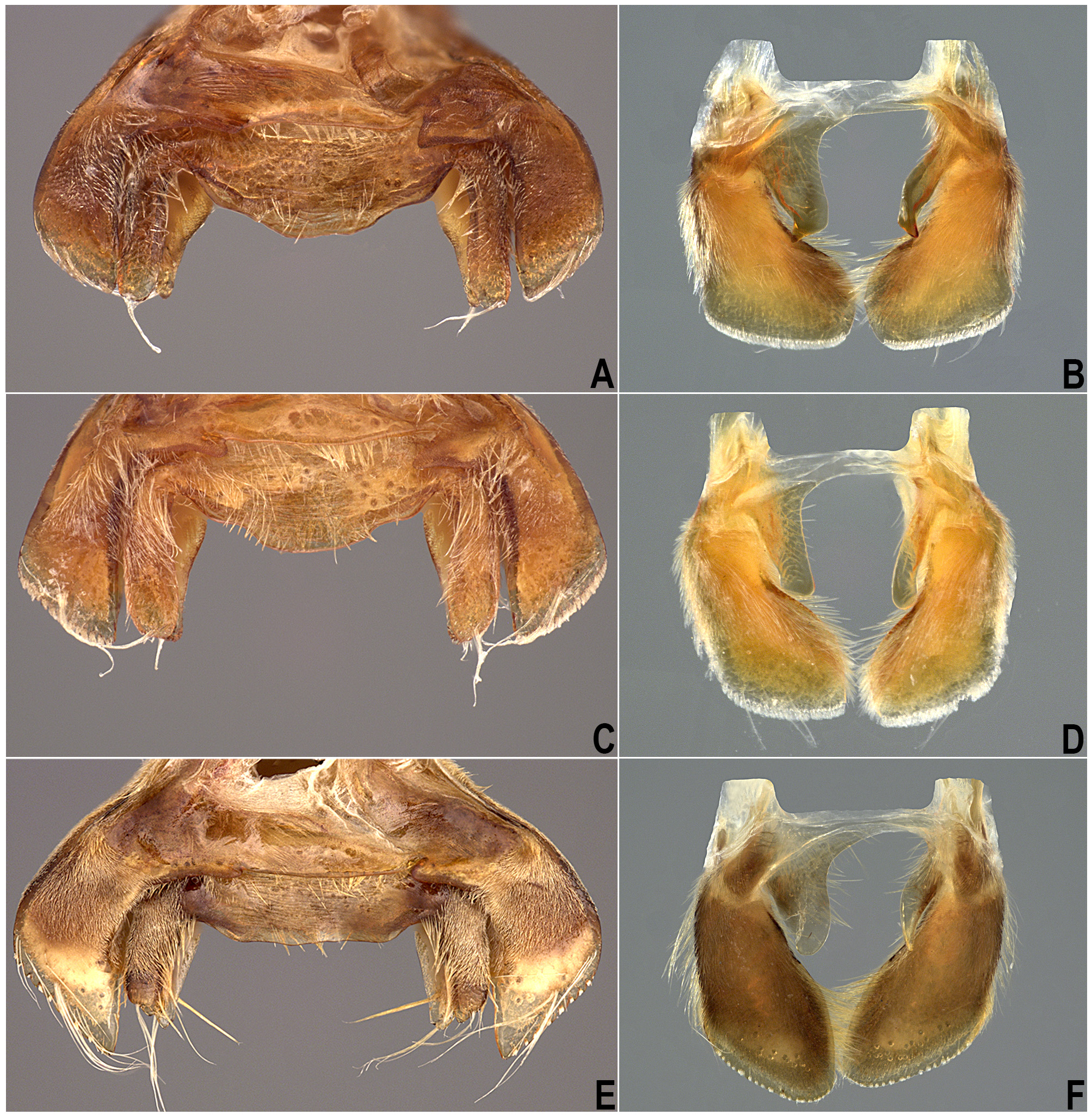