Cp narrow in dv, reniform in lv. A1 5-segmented, with segments 1–3 and 4 + 5 fused. A2 with claw G2 missing. Md-palp with seta s1 small. T 3 with apical claw only. CR with proximal seta inserted close to the mid length of the ramus.

Some other putative differences require validation as they could constitute erroneous observations during the original description of either genus. (1) T 1-palp with 3 apical setae in Terrestricandona   , 2 in Terrestricypris arborea   . Because Terrestricypris wurdigae   sp. nov. also has 3 setae there (see below), this is not retained here as a generic feature. (2) T 2 with 2 apical setae on the penultimate segment in Terrestricandona   , 1 in Terrestricypris arborea   . As the additional seta is very small, this could easily have been missed. (3) Shornikov (1980) also mentioned that the eye is simple; however, as candonid eyes are generally unpigmented, it was most likely not observed.

As for the previous species: Boracéia Biological Station , Municipality of Salesópolis , São Paulo State, Brazil. GPS coordinates: 23°38′16.9″S, 45°50′24.5″W. Inside the forest, near Pedreira’s swamp, in leaf litter at the foot of a rock wall. Material collected on 02.iv.2003 by CEFR and RLP. The species is thus far known only from its type locality GoogleMaps   .

Holotype: a dissected female, with valves stored dry in a micropalaeontological slide and dissected soft parts kept in a sealed slide (MZUSP 16363).

Named after Dr Norma Würdig (Rio Grande do Sul, Brazil), in recognition of her substantial contributions to the knowledge on Brazilian non-marine ostracods.

Most appendages with reduction in number of segments and number and length of claws and setae. A1 ( Fig. 7A View Figure 7 ) 5-segmented, i.e. with segments 1, 2 and 3 fused and with segments 4 and 5 fused. First segment (1 + 2 + 3) with 1 dorsal seta; second segment, being a fusion of segments 4 and 5, with 2 short apical setae; third segment (S6) without setae, fourth segment (S7) with 2 longer setae, the dorsal one being the longest; terminal segment (S8) with 2 apical setae (1 long, 1 half as long) and 1 dorso-lateral aesthetasc.

T 1-palp ( Fig. 8A View Figure 8 ) with 3 apical setae, respiratory plate reduced; endite with about 8 unequal setae, setae a, b and d stout. 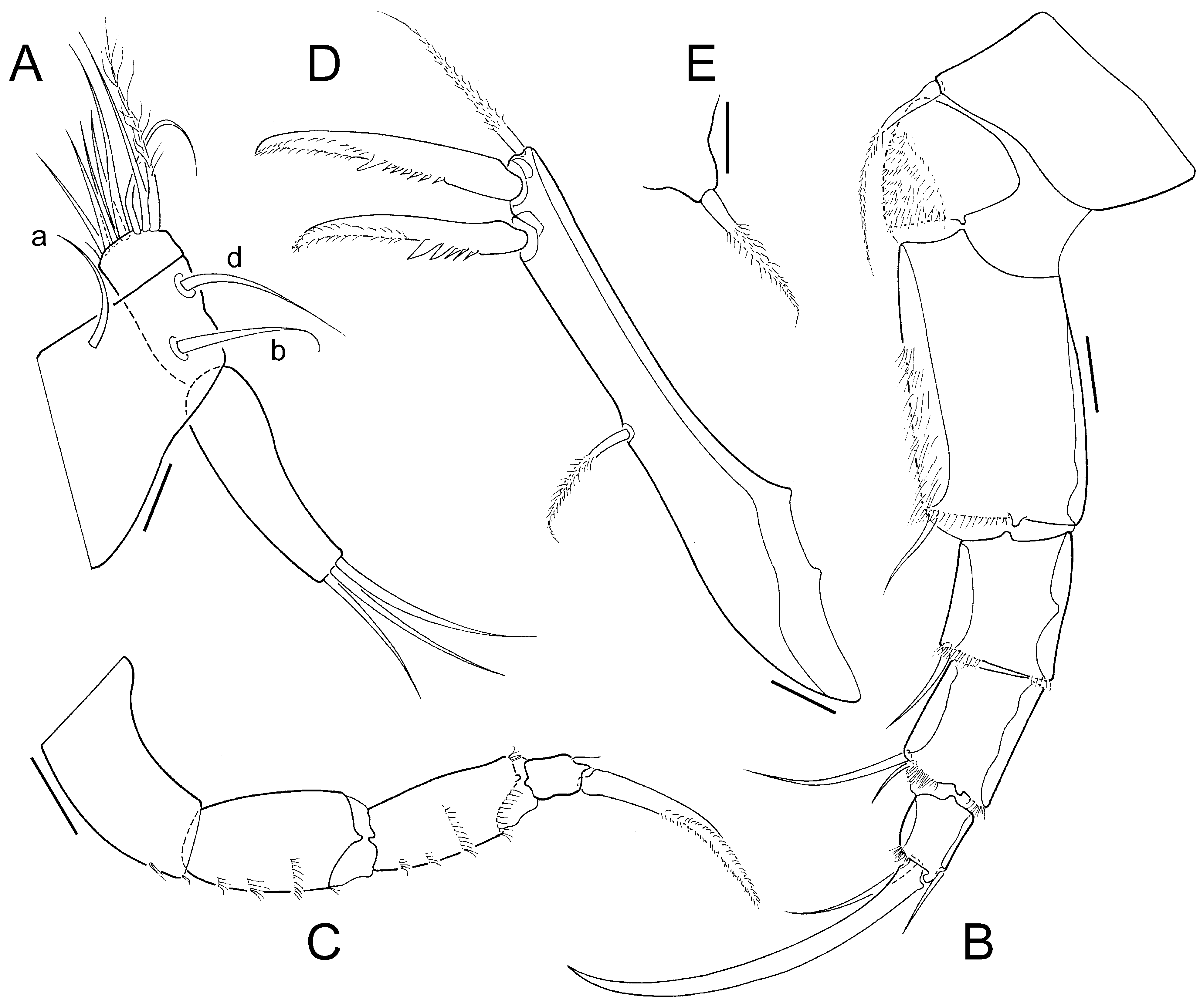