Etymology. Specific name derived from vibrissae –sensory hairs or whiskers found growing especially around the mouths of many mammals and alluding to the setae found around the mouth opening in this species.

Remarks. The two gravid females in this collection carry 2 to 5 well-developed ova and many smaller oocytes in each femur.

The absence of chitinized oral lips in Labrumoides is unique in the Callipallenidae . The mouth opening appears to be formed solely by soft petal-like lips fringed with dense, tangled setae ( Plate 1A, C View PLATE 1 ) suggesting that they may be incapable of grasping, crushing or tearing food with their mouth parts. It is conjectured that this species may belong to a wider group of selective or non-selective deposit feeders that vacuum and ingest their food whole with perhaps epiphytes such as diatoms and foraminifera being possible food sources. Whilst the mouth parts adequately distinguish the new genus from its congeners, overlapping morphological similarities warrant brief comparisons with five other genera found in Australian waters; Bamberene Staples, 2014b , Cheilopallene Stock, 1955 , Meridionale Staples, 2014a , and Stylopallene Clark, 1963 . The mouth openings in all of these genera are formed by three acute oral plates composed of thin pliant chiton. These plates are glabrous and protrude forward from the main body of the proboscis. They are in fact, most developed in Stylopallene tubirostris , the species to which this new species was originally assigned and where they form a long probe-like extension to the proboscis. The joining of the plates to the inflated part of the proboscis is evidenced by a dark transverse suture line. S tylopallene is further distinguished by a combination of eight eye lenses arranged in four groups of two, an oval trunk with lateral processes touching or almost touching, a wide neck region that hardly narrows throughout its length, and female scapes each with a proximolateral process or flange. All species of Stylopallene appear to have an obligate association with arborescent bryozoans ( Staples 2005, 2014b). The new genus shares a similar chela shape and orientation with the monotypic genus Bamberene , but that genus is readily distinguished by a compact, almost discoid-shaped trunk with tall dorsomedian tubercles and the absence of an oviger claw. Meridionale is distinguished by a number of characters, the most conspicuous of which is the general habitus, where the strongly downward or posterior-facing proboscis and chelifores are hardly visible in dorsal view. The chela fingers of Meridionale have heavily sclerotized margins suggesting that they may be used to crush their food; perhaps bryozoan zooids. Cheilopallene shares a tiny body size with the new genus but the fixed finger of the chela is truncate and nodulous, a diagnostic character of the genus. Female Cheilopallene also have a proximolateral process or flange on the scape, not dissimilar to that in Stylopallene , but which is not present in Labrumoides . Some species in the genus Austropallene , only known from Antarctic and Subantarctic localities, also share morphological similarities with Labrumoides but the absence of an oviger claw and the presence of characteristic ‘horns’ on the cephalon of specimens belonging to that genus are sufficient to distinguish the genera. The tapering proboscis of Queubus jamesanus Barnard 1946 from South African waters bares a similarity to the new species but the absence of chelifores and the presence of palps in Queubus are sufficient to distinguish the genera. Unfortunately, Barnard did not comment on the jaw structure.

Cheilopallene hirta Child, 1988: 65 is one of three species of Cheilopallene that does not share characteristics typical of that genus and were considered incertae sedis by Staples (2015). Cheilopallene hirta and L. vibrissa are both recorded from shallow waters in tropical seas and share significant morphological characters; in particular they share the same distal proboscis morphology. They are also of about the same size (leg span about 11 mm) and carry four broad spines on a distal outer bulge of the chelae fixed finger ( Child 1988, Fig. 5F; Fig. 2F View FIGURE 2 , Plate 1D View PLATE 1 herein). It appears also that the fixed finger of both species terminates in a beak-like process ( Child 1988, Fig 5F). The presence of bifurcate and trifurcate setae found on the proboscis tip of C. hirta , as opposed to the simple setae in L. vibrissa , represents a point of difference but this is of uncertain significance at generic level. A further difference in the shapes of the male and female oviger claws would be considered more significant had I not been aware of similar sexual dimorphism in another closely related, but as yet, undescribed species. Child described the male chelae of C. hirta as massive, but noted that the chela palm of the female is less inflated and more triangular than the male bringing it more in line with this female of L. vibrissa . It is unfortunate that Child did not provide a figure of the female chelifore of C. hirta for comparison and although both sexes were represented in the collection from Aldabra Atoll he did not comment on sexual dimorphism of the scape. Based on Child’s (1988, Fig. 5A) figure, the orientation of the chela relative to the scape appears to be a significant point of difference but the wide membrane at the base of the chela palm of L. vibrissa indicates that the chela is capable of considerable movement inwards and downwards ( Fig. 1B View FIGURE 1 , Plate 1B View PLATE 1 ) in which case the illustrations of the chela may only reflect the particular orientation of the chelae at the time of preservation. In light of the aforementioned observations, C. hirta is only provisionally assigned to the new genus, but for the time being it is best placed in Labrumoides rather than left hanging as a spe- cies of uncertain status. The further collection of a male specimen of L. vibrissa , preferably from the type locality, will give greater confidence to the assignment of C. hirta to the new genus. Cheilopallene trappa Clark, 1972 from subantarctic waters is another of the three species that Staples (2015) removed from the genus Cheilopallene and one that also shares a similar proboscis structure with Labrumoides . Clark compared his species to a small group of callipallenids known at that time but was not convinced that his species belonged in Cheilopallene . The status of that species and others sharing similar characteristics will be the subject of a separate paper.

Distribution. Only known from the type locality. Depth 41 m.

I am most grateful to Dr Stephen Keable at the Australian Museum for entrusting the specimens for examination. A big thank you to the Marine Sciences collection management team at Museums Victoria for their ongoing support and to the reviewers of my manuscript for their constructive deliberations. I express my gratitude to my son Aaron for formatting the figures and plates. 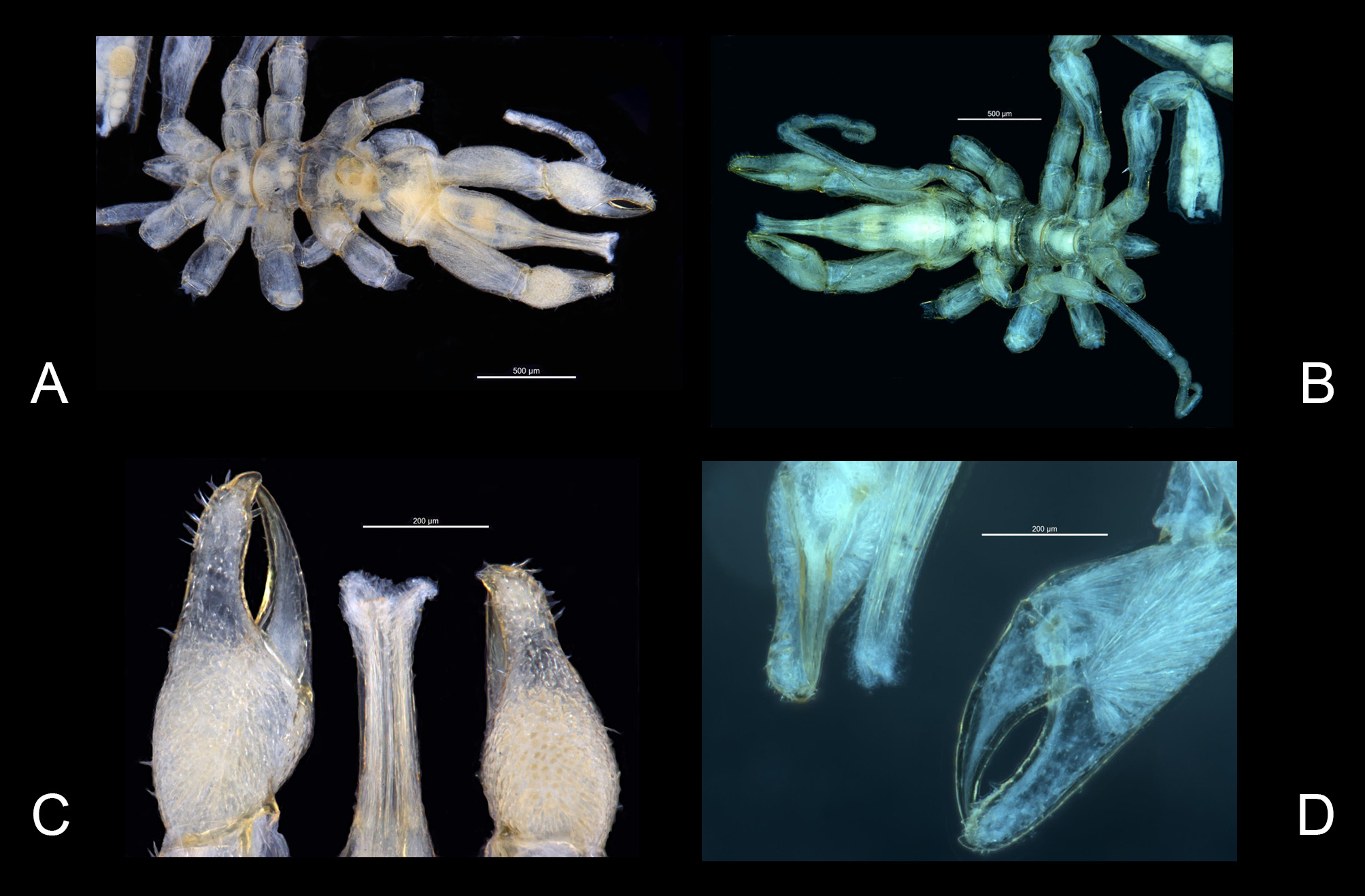 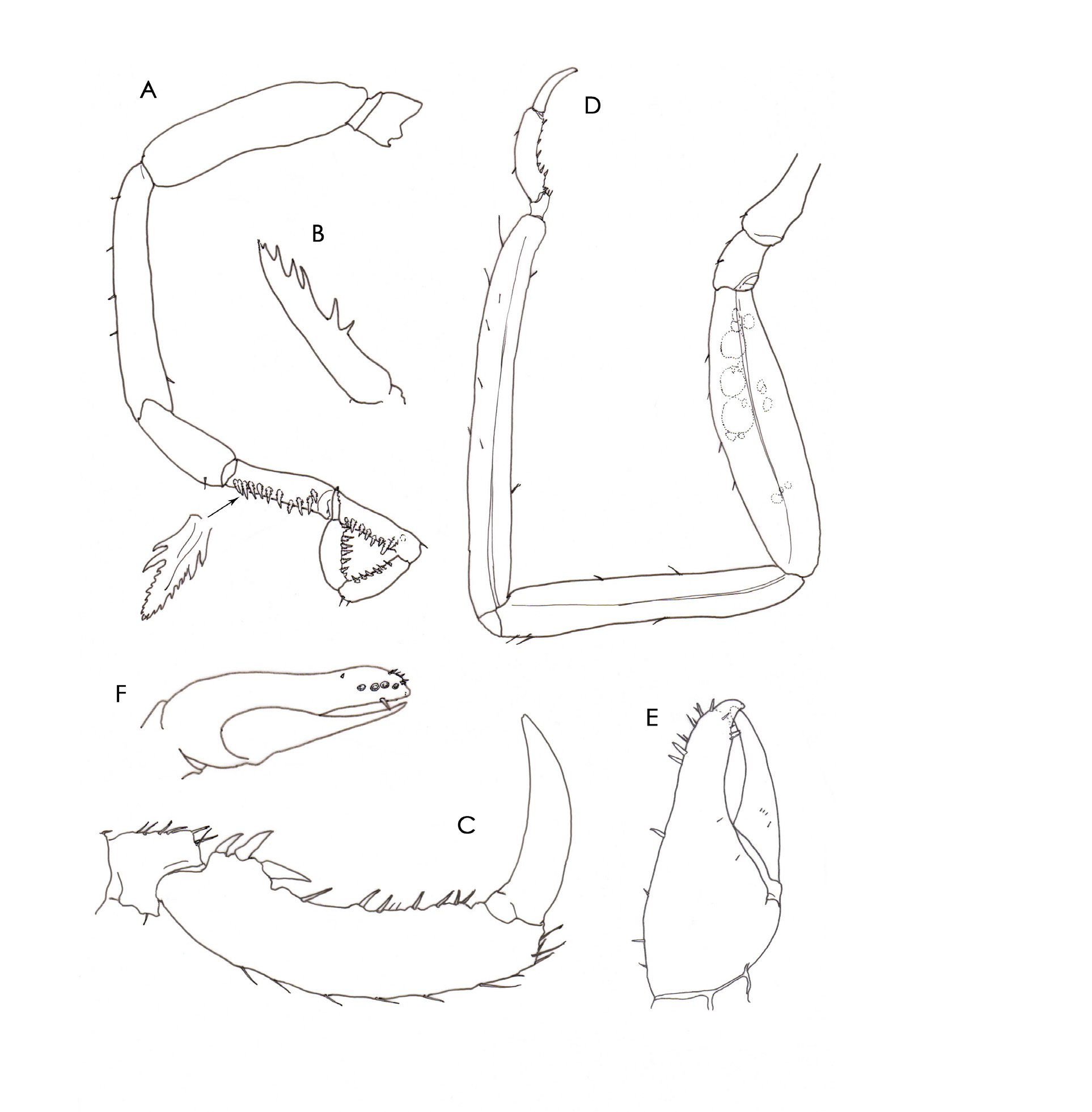