E. Cross-section of pyrene and seed.

H. Stem apex with bases of two petioles, one stipule, and one flower at anthesis; I. Fruit; J. Cross-section of pyrene and seed.

Habitat, distribution and phenolog y. – Psychotria birkinshawiana   has been collected in perhumid evergreen forest at 0–400 m, sometimes on sandy soils, on the Masoala Peninsula (Antsiranana, Toamasina), with flowers in October and with well-developed fruits in February, April-August, October, and November.

Conservation status. – Psychotria birkishawiana   is known from 23 specimen collections representing 19 unique occurrences in perhumid evergreen forest at 0–400 m elevation. The EOO of the species is 7,290 km ², within the limits for “Vulnerable” under IUCN Red List Criterion B1; and the AOO is 68 km ², within the limits for “Endangered” under Criterion B2 ( IUCN, 2012). Four of the 19 occurrences are within the well-protected Masoala PA. The remaining fifteen occurrences are in unprotected areas. Two of the collection sites have degraded or disturbed forest habitats. Forested areas without formal protection in the vicinity of Masoala PA are subject to degradation by small-scale slash and burn agriculture and resource exploitation, including logging, hunting and mining ( GOODMAN et al., 2018). Five collection sites indicate watershed/headwaters/river basin drainages as habitat; two sites have coastal habitat. The four occurrences within Masoala PA can be counted as one protected location (sensu IUCN, 2012, 2019), and the remaining, unprotected occurrences can be grouped into nine additional locations based on geographic clustering relative to the scale of threats, some of them at high risk for further disturbance and exploitation due to their water resources. With ten locations and given general habitat degradation in unprotected sites, the sensitive nature of watershed areas, and no reason to assume that any of the unprotected sites is more likely to disappear than the others, the Red List status of P. birkishawiana   is assessed as “Vulnerable” [VU B1ab(iii)+2ab(iii)].

Notes. – Psychotria birkinshawiana   can be recognized by the combination of its robust habit; medium-sized, glabrous, obovate leaf blades that are obtuse to rounded at the apex; triangular, broadly angled stipules; rather short, cymose, terminal inflorescences with patches or tufts of dense sericeous pubescence along the axes and adaxially on the bracts; subsessile flowers with truncate calyx limbs; short yellow corollas; relatively well developed, yellow to orange fruits; and seeds with the endosperm densely ruminate on all sides. This species is notable in Malagasy Psychotria   for its robust size. The leaves appear to be fleshy or rather succulent in life. The few flowers seen agree with the short-styled form of distylous Psychotria species   , but whether this species is distylous is not yet known. The fruits are relatively large for Psychotria   and appear on dried material to be fleshy rather than juicy, and their form suggests   they may be eaten by lemurs (C. Birkinshaw, pers. comm.); whether these could be bird-dispersed has not been investigated. No ecological documentation is available for P. birkinshawiana   , so its dispersers are only postulated here. Psychotria birkinshawiana   agrees with BREMEKAMP (1963) ’s Mapouria   Group III, which comprises species with a similar general aspect and relatively large fleshy fruits. The fruits of P. birkinshawiana   range to a smaller size than Bremekamp gave for that group, which he diagnosed as having fruits 15–20 mm in diameter, but its largest fruits and other features agree with that group. 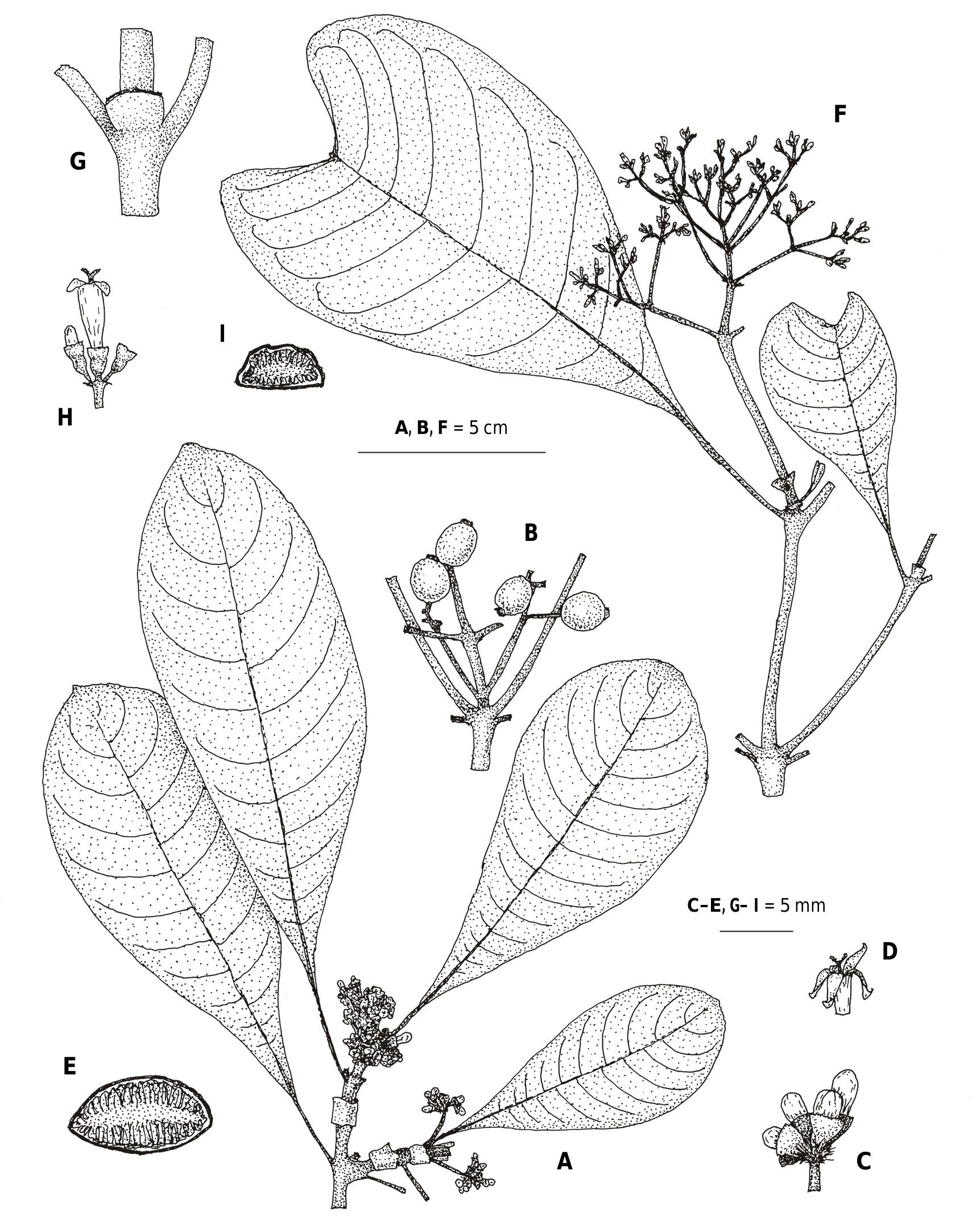 Fig. 3. – Psychotria birkinshawiana C.M. Taylor: A. Flowering branch; B. Infrutescences with bases of two lateral stems; C. Portion of inflorescence with four flower buds; D. Corolla at anthesis; E. Cross-section of pyrene and seed. Psychotria razafimandimbisonii C.M. Taylor: F. Flowering branch; G. Stem node with bases of two petioles and one stipule; H. Portion of inflorescence with one flower from which corolla has fallen, one flower bud, and one flower at anthesis; I. Cross-section of pyrene and seed.